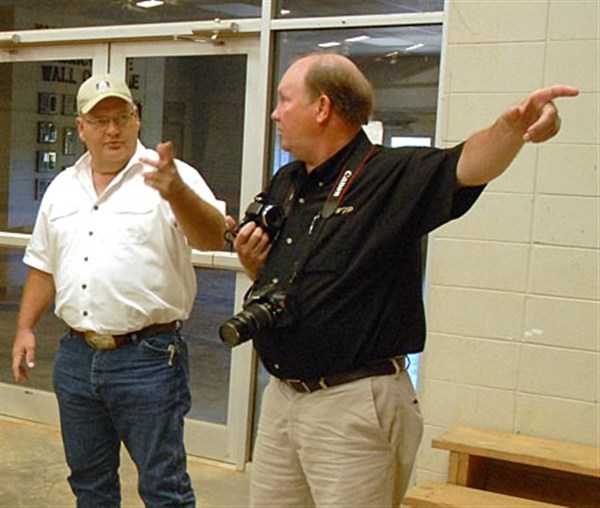 Waldo Cleland of Columbia, state chairman of the Archery in the Schools Program (right) was in town Wednesday morning to look over the Yalobusha County Multipurpose Building. Here he talks with Brent Gray, MSU-ES for Yalobusha County.


COFFEEVILLE – As many as 4500 people are expected to attend the Archery in Mississippi Schools 2014 North State Qualifier next April at the Yalobusha Multipurpose Building.
The event is scheduled for April 1 and 2 and will attract about 1500 shooters from the northern half of the state, according to Waldo Cleland of Columbia, state chairman of the Archery in the Schools Program.
“We’ll average bringing in four spectators per shooter, so we’re probably going to bring in 4000, close to 4500 people over a two day period. It’s absolutely huge,” he said.
Last year over 1500 youngsters participated in the state championship in Jackson. “It’s getting so big we’ve already had about 2000 pre-register for next April. So, what we’re going to have to do is have a qualifier from the north and a qualifier from the south,” said Cleland.
Participants from central Mississippi can come to Coffeeville or they can go to the south qualifier at Hattiesburg, he added.
Cleland said that this year the AIMS group would give out full invitations to the state championship, but we wanted to go ahead and put a north qualifier and a south qualifier and get the tournaments running.
“Even though you don’t have to qualify through these tournaments, you will next year. We’re giving it a text run. This shoot is going to be from now on. If everything goes well we’re hoping to host it in this location from now on,” he said of the Multipurpose Building.

Successful Program
Cleland, a five-time national archery champion and a two-time world archery champion, started Mississippi’s Archery in the Schools program and he has brought the program to its present successful level, noted Yalobusha County Economic Development and Tourism Director Bob Tyler.
“The acquisition of the north Mississippi archery qualifier in the county’s multipurpose building will be a tourism windfall for Yalobusha County,” he said.
“I speak for our Supervisors, other elected officials, members of our Yalobusha County Economic Development and Tourism District and all citizens of our county when I express our appreciation to Dr. Sam Polles, Executive Director, Mississippi Department of Wildlife, Fisheries and Parks (MDWFP), and his staff and the members of the Foundation for Wildlife, Fisheries and Parks for their willingness to hold the first North Mississippi Archery Tournament in our County,” said Tyler.
Bringing the qualifier was a cooperative effort between the county’s supervisors, the Yalobusha County Economic and Tourism District, Extension Agent Brent Gray and the Mississippi Department of Wildlife, Fisheries and Parks.
The Archery in the School Program started eight years ago and is now in almost 400 school in Mississippi both public and private. “The program began in Kentucky’s wildlife agency and we hosted those officials for a week in Jackson as we learned how to start up Mississippi’s archery program,” commented Tyler, who is also a consultant with the MDWFP. “Each state is required to create a partnership between its wildlife department and the department of education and we created that partnership and it exists today.”
The primary mission of the program is to provide the activity for all students, boys and girls, regardless of their level of athletic talent, Tyler continued. The program can be offered in a school as a segment of the school’s physical education program or it can be a semester-long proposition. Safety is a basic element of the program and no student has ever been injured since the program began. School teams require the same bow and compound bows are not allowed.
“We have found that the Archery in the Schools Program is popular with students and it has been a positive factor in keeping students in school,” said Tyler. “Obviously, archery is an activity that can be carried into adulthood.”
In April of 2013, the first state archery tournament was held in the Equine Center in the Depart-ment of Agriculture and Commerce’s fairground Equine Center. Commissioner Cindy Hyde -Smith made the Equine Center available and she awarded the trophies at the end of the state tournament. Yalobusha County’s Multi-purpose Complex is constructed along the same structure as the Equine Center.
Cleland said that he would be in Yalobusha County on Wednesday, Sept. 4, looking over the Multipurpose building and working to get the local schools set up to participate “so you’ll have a home team.”