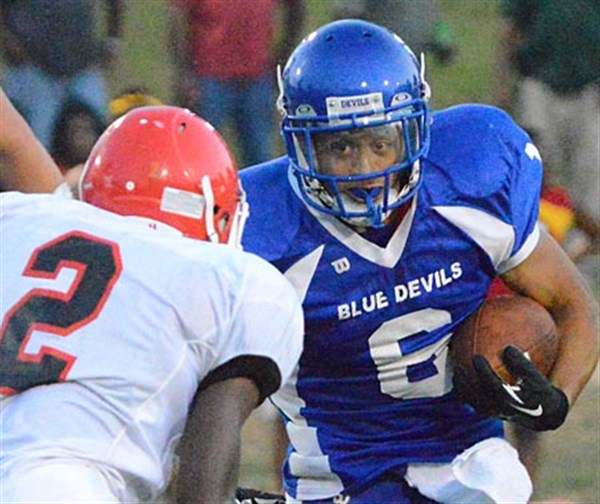 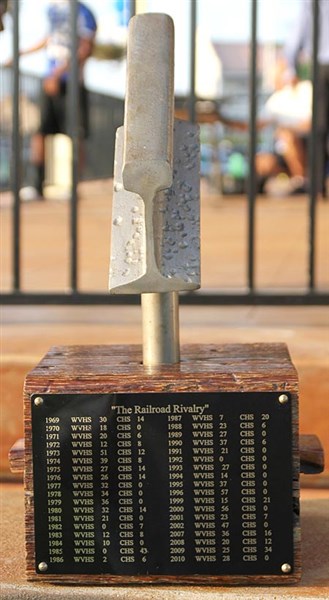 The Railroad Rivalry trophy will remain in Water Valley after the Blue Devils defeated the Coffeeville Pirates last Friday. The trophy dates back to 1969 and each year the winning team is allowed to put it on display. – Photo by Claudia Anthony


WATER VALLEY – The Blue Devils (2-0) picked up their second win of the season  Friday night with a 56-20 victory over the Coffeeville Pirates (0-2) in the Railroad Classic. The win marks the fourth consecutive claim to the Railroad Classic trophy.
Senior quarterback E.J. Bounds and his younger brother, junior Brandon Bounds accounted for six of eight touchdowns in the shootout at Bobby Clark Field.
E.J. Bounds recorded 121 rushing yards, carrying the ball into the endzone four times during the night. E.J. Bounds also connected for 100 yards in eight of 15 passes for the night, including a touchdown throw to T.T. Person.
“That’s the best team we have played from Coffee-ville in a while. They played hard and stayed on the field the entire game,” Coach Brad Embry said about the contest.
“We played hard and fast, but we had a couple of turnovers. That’s not usually who we are,” Embry told the Herald.
“Coffeeville is going to make some noise in their division,” Embry added.
Water Valley recorded 310 yards rushing on 52 carries. Behind E.J. Bounds, senior James Washington registered 47 yards on five carries, junior Elijah Rogers earned 43 yards on seven carries, Brandon Bounds carried the ball 40 yards on eight runs and junior Demetrius Ingram went 29 yards on two carries.
Water Valley also put up 114 yards in the air on nine receptions. Senior Trey Alexander had four catches for 41 yards, and junior Derrick Gooch, senior K.J. Lee, junior Dee McNeal and junior Derrick Brady all registering one catch on the night in addition to Person’s touchdown grab.

First Half
The two teams battled as action got underway. The Pirates went three-and-out on their opening possession, and bobbled the punt giving the Blue Devils their first possession on the Pirate’s 30 yard-line.
The Blue Devils responded with an eight-play drive that ended with a missed field goal by junior Alex Robles on a 30-yard attempt.
The Coffeeville team would not be able to take advantage of the turnover, fumbling on their second play with a little over half of the first quarter remaining.
The first score would not come until over midway of the first quarter, when E.J. Bounds found the endzone on a short run. Almost 12 minutes later, with just over five minutes remaining in the half, the Blue Devils had built a 20-0 lead.
The Pirates would answer with a long drive by Antavius Moody and several Blue Devil penalties, allowing Moody to enter the endzone from a yard out to make the score 20-7.

Fourth Quarter Rally
Two more unanswered touchdowns put the Blue Devils up 34-7 and sparked a rally by the Pirates in the final quarter. The Pirates scored their second touchdown of the night in the opening seconds of the fourth quarter and took advantage of a Blue Devil fumble to score their third touchdown,  narrowing the gap to 34-20.
But that would be the last time the Pirates would see the endzone, as the Blue Devils took advantage of mid-field position on their next possession to march into the endzone in four plays, capped by an E.J. Bounds run to make the score 41-20 with 8:22 remaining.
The Pirates would be forced to punt on the next drive, and again the Blue Devils marched into the endzone in five plays, with Brandon Bounds finding the endzone. A Robles’ extra point put the Blue Devils up 48-20 with just over half of the fourth quarter remaining.
The Pirates would again go three-and-out, and the Blue Devils launched their final touchdown drive of the game. This time freshman quarterback Ross Ingram took over as the signal caller with 53 yards to paydirt.
The score would come six plays later, as junior Demetrius Ingram would carry the ball in for six with a minute remaining in the game.

Water Valley Hosts Calhoun City
The Blue Devils must now turn their attention to the biggest test on the early portion of the schedule, the Calhoun City Wildcats.
Last year Embry’s crew defeated the Wildcats 38-21, their first victory over the rival since 2009.
The Wildcats trampled Houston last week, 30-13; and rolled over Coffeeville, 45-6, in their season opener.
“Calhoun City always has a good football program,” Embry reported. “This yeart hey have a legitimate shot at making it to Jackson this year. But we need to play tough teams early in the season.”