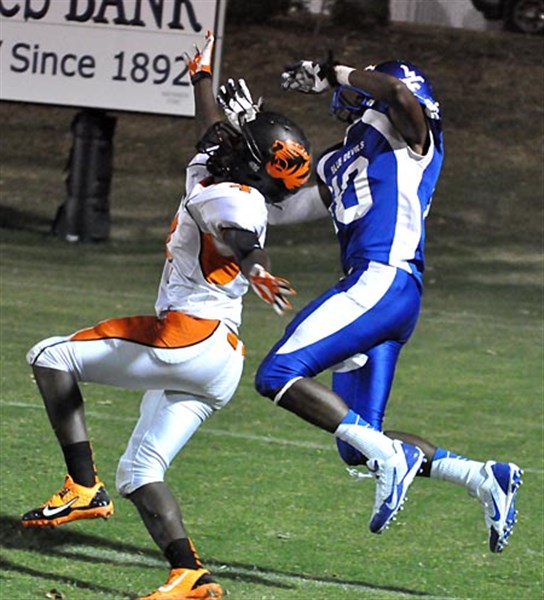 L.J. Hawkins makes a nice catch in heavy traffic in the contest against Calhoun City. – Photo by Mark Anthony. 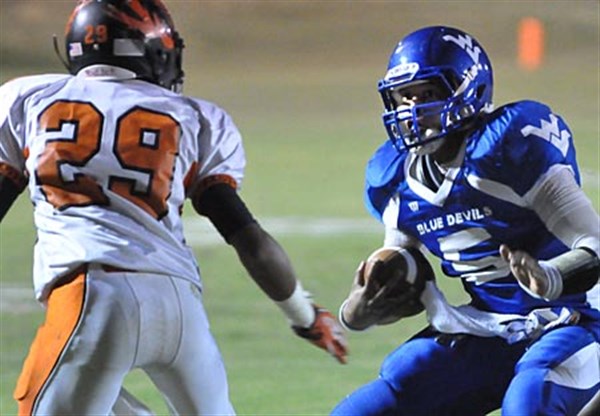 Quarterback E.J. Bounds found the end zone twice, including this run when he cut up the field for the touchdown. – Photo by Mark Anthony


WATER VALLEY–The Blue Devils (3-0) recorded their third win  this season as they dominated Calhoun City (2-1) last Friday, 42-6.
The game marks the second consecutive year for Water Valley to earn a win over Calhoun City, reversing a two-game win streak for the Wildcats in 2010 and 2011.
Water Valley scored six touchdowns on the night–two in the second and again in the third and fourth quarters. Junior Alex Robles would have perfect night, kicking six point after touchdowns.
The Wildcats only score on the night came on their opening drive during their first possession as the game got underway at Bobby Clark Field. But the scoreboard would stand at six the rest of the game for the visiting team after the extra point was blocked.
The Blue Devils would not get on the scoreboard until late in the first half. Facing fourth and a yard to the endzone, E.J. Bounds ran it in for six.
The Wildcats next drive was cut short with an interception by T.T. Person, but the Blue Devils could not capitalize on the turnover and would go three-and-out. However Calhoun City would also go three-and-out on their set of downs and give the Blue Devils a final opportunity with two minutes remaining in the half.
This time E.J. Bounds would connect with Person for a 41 yard pass and the score would be 14-6 at halftime.

Second Half
The Blue Devils would start the second half with eight-play drive capped by a seven yard quarterback keeper from E.J. Bounds to go ahead 21-7 and set the tempo for offensive play in the second half.
The Blue Devil defense would also stand strong against the Wildcats in their opening drive of the second half. Starting on their 37 yard-line, the Wildats drove all the way to Water Valley’s nine yard-line before failing to convert on fourth and three.
Water Valley would respond with 11-play, 89-yard drive for their fourth score of the night with a 19-yard run by senior James Washington.
The Blue Devils’ next score would come on a big interception from Person, who would go 42 yards to the endzone to put his team up 35-6.
The final score for the night would again come on a pick six, as Dee McNeal registered an interception to close the night 42-6.
Friday Night
The Blue Devils will be on the road Friday, traveling to Bruce to play the Trojans.
Bruce is coming off a narrow win against the Coffeeville Pirates, 26-19. The teams were tied at 19 at the end of regular play, forcing the game into overtime.