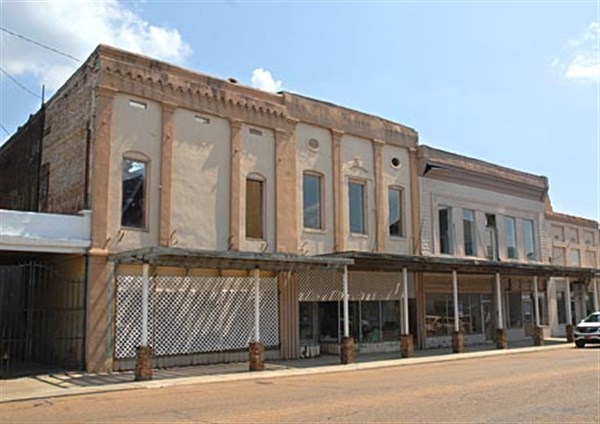 Kagan Coughlin is in the process of buying the “old Blu-Buck” buildings on North Main Street. The city-owned alley entranceway can be seen on the left.


WATER VALLEY – The “old Blu-Buck buildings” on North Main Street are being sold if the deal can get past a major obstacle standing in the way – the Internal Revenue Service.
The first official public acknowledgment that the buildings are under contract came during the regular “first Tuesday” meeting of the mayor and board of aldermen last week.
Mayor Larry Hart said, “Kagan Coughlin, owner of the BTC, is in the final stages of purchasing what we affectionately call the old Blu-Buck buildings and that’s good news for everybody in the community.”
“We probably should have added Kagan to our prayer list,” the mayor added, tongue-in-cheek. “He’s got quite a job ahead of him.”
Hart said that as Coughlin researched the properties, he found that one or more of the structures was on city property, the alley that runs between the northernmost building and the old Herald office building.
The mayor explained what Coughlin was asking aldermen to consider was to declare the alley surplus property and offer it for bid.
“I think Kagan has a good plan and I would certainly be in favor of declaring that surplus property,” Hart said.
John Crow of the Crow/Martin Law Firm, attorney for the board of aldermen, asked if he could comment. He said that he represents the Robert Suratt estate and that Coughlin has a contract with the estate. But, he continued, there are some issues with the IRS and Coughlin wouldn’t be able to purchase the buildings “until they are out of the way” and added that it could be 45 to 60 days before the IRS acts.
After discussion, aldermen agreed to wait until that time to declare the property surplus. But, they also agreed that they were in favor of Couglin’s project.
Among other actions at the Sept. 3 meeting, aldermen:
• Held the legally required public hearing on the proposed city budget, which lasted less than a minute since no members of the public were present. (The budget was approved Tuesday morning, Sept. 9, at a special called meeting.)
• Heard a report from Water Valley Main Street Director Mickey Howley.
Howley said that he had just returned from a meeting at Ole Miss with the senior integrated marketing class. He explained that Water Valley is the new “client” for their senior project and class members would be in town over the next few weeks.
“What they are going to do for Water Valley is develop a marketing campaign and plan and present it in December,” Howley said. “We can choose to use it or not to use it.”
He reported that  Thurs-day, Sept. 19, would be the date for the next downtown pep rally at the pavilion in Railroad Park.
On Saturday, Sept. 21 this year’s Art Crawl will be held from 5:30 until 9 p.m. There are 18 stops with about 40 artists.
His final comment was to note that tomatoes were “getting a little thin” at the Farmers Market.
• Accepted a driveway leading to the Myrick property off Blackmur Drive as a donation of abandoned property.
• Purchased a Hurst Jaws of Life cutter from Sunbelt Fire for $7,000.
• Authorized the Tri-Lake Fairgrounds Association to hold the annual Christmas parade on Saturday, Dec. 7 or on Saturday Dec. 14 if a rain date was needed. A letter to the board from parade chairman J. C. Womble requested use of the Railroad Park pavilion for pre-parade activities and for announcing and recording the event.