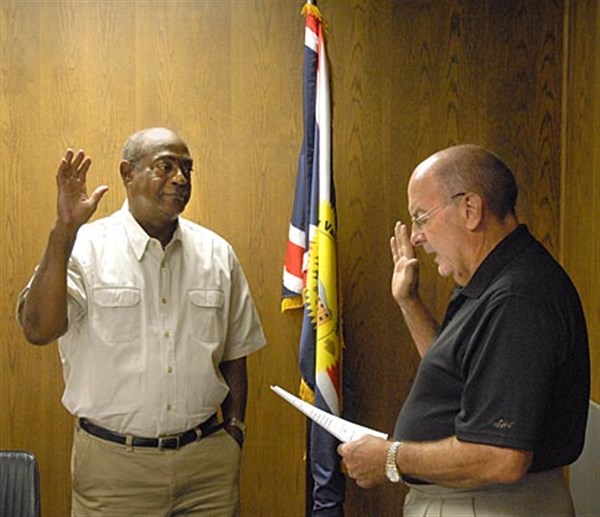 Alderman Fred White takes the oath of office from Mayor Larry Hart for the second time this year after having won the Aug. 13 special election.


WATER VALLEY – Alderman Fred White was sworn in – again – to represent Ward Two after having won the special election Aug. 13.
Only two months ago at the July 2 board meeting White was sworn in to temporarily fill the position until the election could be held.
The unusual situation began when newly elected Alderman Ray Hawkins vacated the position at the end of June citing “unforeseen circumstances” that could have put his job as assistant police chief at the University of Mississippi Police Department in jeopardy.
Ray Hawkins had defeated White in a two-man contest in the May primary election, but resigned just as the new term was set to start July 2, prompting the special election.
This time  White faced challenger Kathleen Hawkins, wife of Ray Hawkins, in the special election and defeated her, 93 to 58.
During the regular “first Tuesday” meeting of the mayor and board last week, Mayor Larry Hart administered the oath of office, congratulated White for his win and noted that both candidates ran a good race.
Later, at the end of the meeting, White said that he had one important thing to add. He turned to Mayor Hart and said, “This man prayed for me in the hospital.”
The long-time alderman explained that Hart visited with him while he was in the hospital after suffering a stroke and asked if there was anything he could do.  White, who couldn’t speak at the time, placed his hands together to indicate he wanted his long-time friend to pray for him.
“He prayed,” White said, and added. “Thank you, Larry.”
‘God answered those prayers,” Hart responded, visibly moved by White’s comments. “He answered all those prayers for Fred.”
“I’ve told him several times, it’s a miracle,” the mayor said. “He really shouldn’t be here tonight.”
“Two doctors told me I wouldn’t be,” White added with a smile.