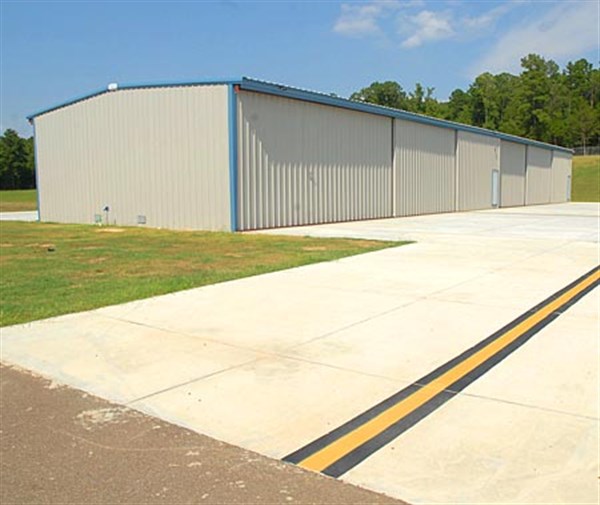 
WATER VALLEY – The first renter has moved an airplane into the city owned T-hangar at the municipal airport.
Mayor Larry Hart reported to aldermen at a special called meeting of the board Tuesday morning, Sept. 10, that Lafayette County businessman Mike McGregor has rented one of the four available spaces.
“I put an airplane in a hangar out there yesterday,” McGregor told the Herald, referring to Monday, Sept. 9.
He will be paying $75 per month rent in the $305,000 project, which was completed earlier this year. “That (rent) is comparable to other small airports in the area,” McGregor said.
The hangar project was funded through an FAA grant and required a ten percent match, which was divided between the city and the Mississippi Department of Transpor-tation. The city’s portion of the match is around $15,000 worth of “in-kind” work. All other costs associated with the project including engineering and construction are included in the grant.
McGregor had asked city officials in December of 2011 for a lease on property at the airport to build his own hangar with private funds, but was turned down. Under his plan, McGregor said that he would pay to lease the property and also pay property taxes on the structure. Then, at the end of a 20 to 25 year period, the city would own the hangar.
Among other actions at the Sept. 10 meeting, aldermen:
• Adopted the city budget, which was the original purpose for the special meeting.
A public hearing on the budget was held at the beginning of the regular meeting Sept. 3. State law requires that seven days must pass before the budget is adopted, necessitating the special meeting.
• Approved payments of $136,996.32 to Northwest Contracting Services, Inc. and $26,099 to Willis Engineering for work on the current sewer project.