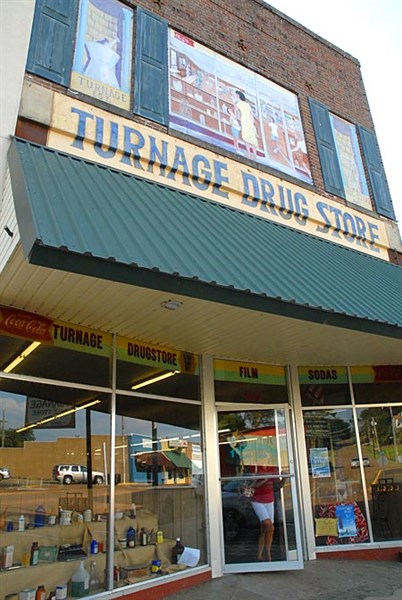 A customer exits Turnage Drug Store after repairs to the front door Thursday afternoon. In the rear of the building, an ATT repairmen was restoring telephone service to the long-time Main Street business.


WATER VALLEY – An early morning break-in Thursday at Turnage Drug Store is believed to be the work of a “very professional” burglary ring.
Captain Roger Thomas of the Water Valley Police Department said that the Mississippi Bureau of Narcotics is assisting with the investigation and they believe it to be the work of a burglary ring that has been operating in the state.
“At this time, we don’t think anyone local was involved,” Thomas said, but noted that officials do have a couple of persons of interest.
The burglars took an undetermined amount of narcotics and the stores stock was being inventoried.
The burglary was discovered by Binnie Turnage when he found both the back door and the left front door broken out and the telephone lines cut.
This is the second burglary at Turnage Drug Store this year. The first occurred in early March when a brick was thrown through the back door of the long-time Main Street business and unknown amounts of drugs and narcotics were taken.
Two days later, police arrested Beau Rayburn, 31, and charged him with burglary and grand larceny in connection with the Turnage Drug Store break-in.
“We are also assisting on an auto burglary in Oakland that we think is related to this burglary that also happened in the early morning hours,” Thomas said, but couldn’t give additional details.
Thomas said officials are working around the clock on this series of burglaries. “The last number count I had, there had been 53 pharmacy burglaries since the first of the year,” Thomas said.
Among the pharmacy burglaries reported in the northern part of the state was one at the Sherman Pharmacy in Pontotoc County in January. Police responded to the break-in around 2 a.m. and two masked men led officers on a high speed chase through parts of Lee and Pontotoc Counties in a stolen vehicle.
In late July, Chandler Drugs and Southern Discount Drugs in Calhoun City were broken into around 2 a.m. Calhoun County Sheriff’s Department investigators were looking for four masked men believed to be involved.
And, just last month in Oxford, police were seeking an unknown number of people responsible for the early morning burglary of the G&M Pharmacy on South Lamar Blvd. Officers responding to the alarm found the front glass door broken out.