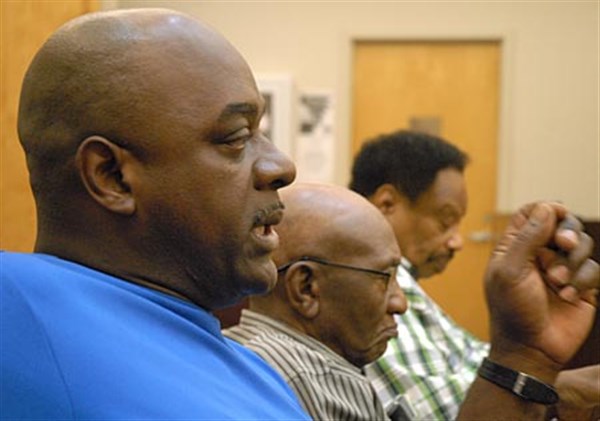 Levert Hawkins told school board members the punishment for fighting was severe. He was accompanied by longtime educators Percy Haywood and Hubert House.


WATER VALLEY – The school district’s disciplinary policy of 15 days in-school suspension for fighting was questioned by a parent during the board of trustee’s meeting Sept. 9.
Levert Hawkins told school board members that the punishment is “excessive” and “hinders a child’s ability to stay on track.”
Hawkins requested to appear before the board to discuss the issue and was accompanied by long-time educators Percy Haywood and Hubert House.
“Fifteen days is a long time to be out of the mainstream. In the past, the policy had been three to five days for fighting. Now the policy is 15 days,” Hawkins said.
He also questioned the school’s ability to get the necessary study materials to the alternative school, located to the northeast of the football stadium, where in-school suspension students are housed.
Superintendent Kim Chrestman responded that the school administration wants to address the issues of violence and fighting very seriously. “This is not something that we want to accept or tolerate or have that stigma on our school system.”
Chrestman acknowledged that the current punishment might be too strict for first time offenders.
Board president Lamar Burgess noted that it was his understanding that when the school switched from out of school suspension to 15 days in the alternative school, the number of fights went down by 26 percent.
“What we’ve got to convey to our young people is that fighting is totally unacceptable,” Burgess continued.
Trustee Casey Washington joined the conversation and among other comments said, “We want our community to know that we want a safe school.”
He also explained that it wasn’t the usual procedure to change policy during the school year. But, he added that it would be looked at.
Among other actions at the Sept. 9 meeting, trustees:
• Approved performance based compensation pay for teachers.
• Accepted a donation of $520.99 from Mechanics Bank.
• Renewed the yearly collaborative agreement between the district and the Mississippi Action For Progress Head Start program.
• Rescinded the old district policy manual and approved the new policy.
• Rescheduled the Sept. 23 board meeting from its usual time of 6:30 p.m. to noon to accommodate school board training
• Heard the superintendent’s report from Chrestman.