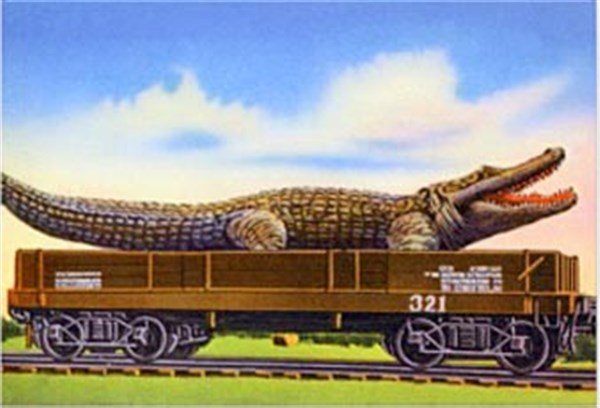 By the time the Hal Vaughn gator story made it to Illinois Central Railroad headquarters in Chicago, the critter was almost as big as this unrelated postcard illustration. 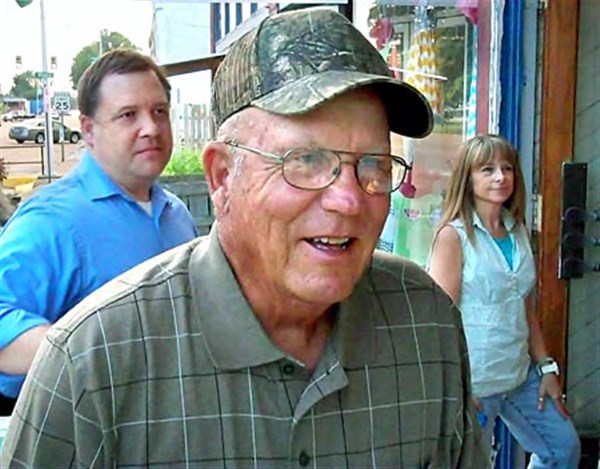 Hal Vaughn tells his story of capturing a gator after hitting it with a train before he retired from the Illinois Central Railroad. – Photo by Jack Gurner


WATER VALLEY – Alligator hunters broke all four categories of state records in weight and length between Aug. 31 and Sept. 10 in the state’s gator season. But, the best alligator hunting story of all just might be the one told by a local man who bagged one with a train years ago.
Retired Illinois Central Railroad engineer Hal Vaughn was coaxed into retelling the story during the opening of the railroad related art exhibit at Yalo Studio and Gallery last month.
Vaughn told the crowd  gathered in front of the studio that he was northbound out of Durant on a short train. Just north of the town of West he saw an alligator between the rails.
“I stopped and backed up. I thought I had hit him,” Vaughn explained.
The alligator had raised his head as the engine passed over and the footstep struck him. “I got him up and put him in the engine.”
Around the time the train went through Winona, Vaughn said he heard the alligator make a noise. “When I checked on him and kicked him, he turned around and snapped at me. I just had him knocked out.”
Arriving at Grenada, Vaughn told the conductor to get off at the depot and call the game warden. “Tell him to come get this thing off the engine.”
“He called the police department and it went out on the air,” Vaughn said. “Every cop in Grenada was there, the animal control man, two game wardens and the newspaper. The depot was full of people.”
Vaughn said that the alligator ended up in the depot. “It started running around and around that depot. People were jumping up on desks.”
Railroad officials from the IC headquarters in Chicago called the next day understandably upset. Vaughn said that by then the story had gotten bigger and so had the alligator’s reported size, which by then had become 12 feet in length.
“I won’t do that again,” he said. “I liked to got fired.”
IC even made a new rule–no alligators on trains.