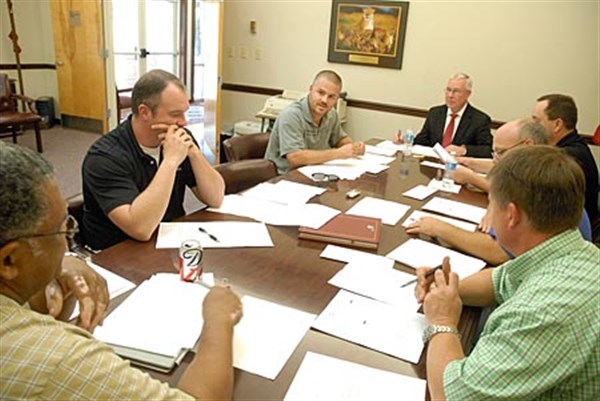 Chris Terry (center) stepped down from the school board this week. – Photo by Jack Gurner


WATER VALLEY – Chris Terry has resigned from the Water Valley School District Board of Trustees effective Sept. 24.
Board President Lamar Burgess announced “with regret” during the school board meeting Monday that a letter of resignation had been received from Terry.
“I really hate that this happened,” Terry said, as he explained that he and his wife had placed their house on the market and it had sold.
“We’re going to build in Water Valley,” he added. “We’re going to stay here. It’s just that I couldn’t find something in the district.”
Terry had served as district one trustee, one of five districts in the Water Valley  school system.
“I have enjoyed doing this,” he commented on his school board position. “I’ve learned a lot.”
Terry was elected to the five-year term last November, replacing Dr. Steve Edwards, who did not seek reelection. He ran against Bryan Gilley and only 13 votes separated the two candidates. The final vote tally was 335 to 322.
Trustee Casey Washing-ton suggested that Terry could act as an advocate for the school district. “You’ve seen from the inside what is going on,” Washington said. “I appreciate the time that you have served.”
Terry noted that the Water Valley School District has a good board. “I’ve seen that in the past ten months. Y’all do a great job.”
“Now gentlemen,” said Burgess, “the challenge is going to be we’re going to have to find someone to appoint.”
Superintendent Kim Chrestman told board members that he would research state law and school board policy to determine the board’s course of action. “From what I understand we will appoint someone until there is an election.”