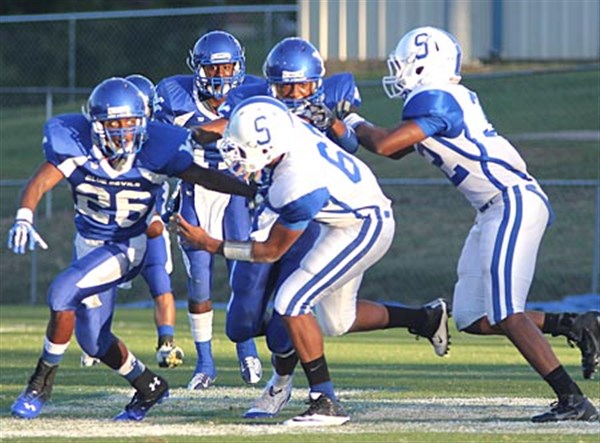 Big Plays – Mark Gooch #26 (photo above) sets up a block against Senatobia. He was among big player makers Monday, and recorded a special teams touchdown as the third quarter got underway. T.T. Person was another big playmaker including this interception (photo below). – Photos by Mark and Claudia Anthony 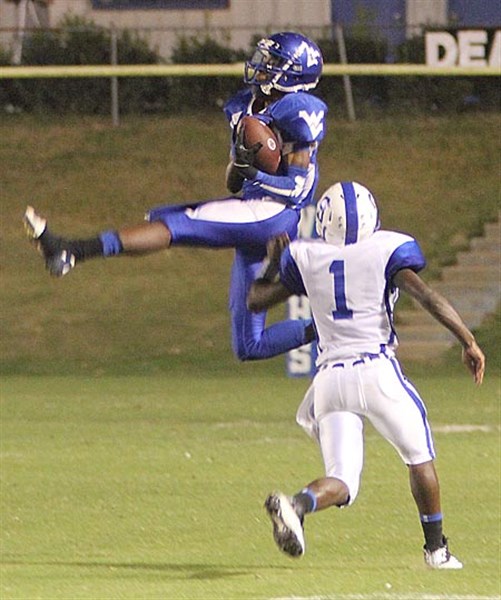 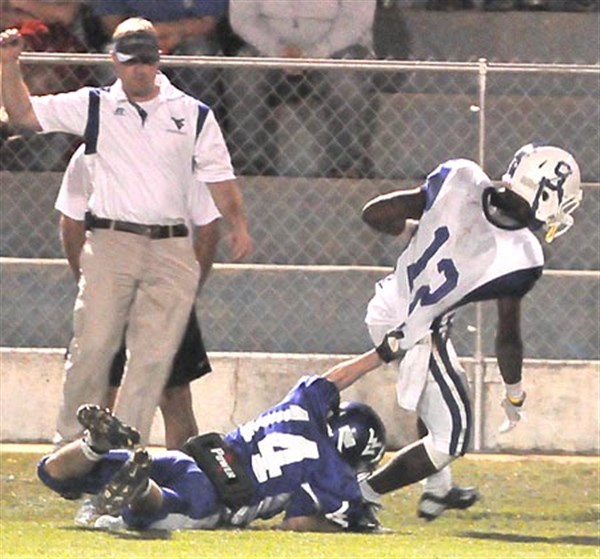 Junior Stanton Sparks hangs on for a tackle in Monday night’s game. – Photo by Claudia Anthony 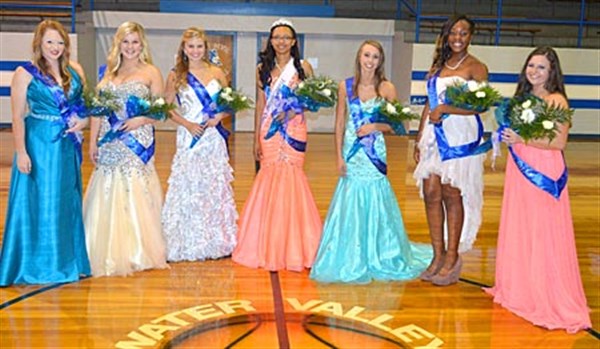 
WATER VALLEY– The Blue Devils put 38 unanswered points on the board in the first half during their 42-7 rout over Senatobia (1-4) in a rare Monday night game at Bobby Clark Field. The win pushes the Blue Devils to 5-0 on the season.
The game was postponed from Friday after strong storms pushed through the area, setting up an unprecedented week as Coach Brad Embry has only four days between games before his team takes the field Friday on a road game against Winona.
Embry said his squad will have a less rigerous practice schedule with less time for the players to recoup.
“This is an interesting week, we have never been through this situation,” Embry added. “We are going to do as much as we can without exerting a lot of energy.”
The game against the Senatobia Warriors marked the first time the two teams had lined up since 2008, when the Blue Devils suffered a defeat 24-17.
This time the outcome was much different as the home team took control of the game from the first snap, scoring in the air, on the ground and one defensive score.
First Half
The Blue Devil defense set the stage for the blowout, stopping the Warriors on their first drive on three plays. A botched snap kept Senatobia from punting and the home team would start the first drive 31 yards from the goal line.
However this drive would fall short, and facing 4th down and 10, junior kicker Alex Robles would be first to connect for points with a 24-yard field goal.
After both teams went three-and-out in the next series of possessions, Water Valley scored on a nine-yard run by senior quarterback E.J. Bounds to go ahead 9-0. Robles connected on the extra point, and would remain perfect on the night.
Not to be outdone, junior Brandon Bounds (E.J.’s brother) was next to find the endzone on a 45 yard-run to put the Blue Devils up 17-0 with 10 minutes remaining in the half.
The clock would only tick down another 18 seconds before the Blue Devil’s next score, as Cortaveous Hawkins recovered a fumble from mid-field and sprinted to the end zone to increase the lead 24-0.
Another bobbled snap on a punt by the warriors would set up the next score, and this time E.J. Bounds would connect with Derrick Brady for a touchdown reception to go up by 31 points.
The Blue Devils then capitalized on a blocked punt with only 35 ticks left in the half. E.J. Bounds connected on two passes for 35 yards, including a 15 yard touchdown launch to T.T. Person for the final touchdown of the half.
The Blue Devils would waste no time in the second half finding the endzone when Mark Gooch returned the opening kickoff 85 yards for another score to go ahead 45-0.
Embry then rotated younger players on both sides of the ball for the remainder of the game, with both junior quarterback Jonathan Kent and freshman quarterback Ross Ingram seeing playing time. E.J. Bounds finished the night 6-for 12.
“These young kids have worked hard too, and we like to reward them with playing time when possible,” Embry said.
Senatobia would find the endzone on a seven-play drive capped by a six yard run to make the game 45-7.
The Blue Devils will take the field Friday night against Winona (1-4) looking for their 50th win under Embry’s direction as head coach.
Embry said the success is a culimination of a lot of hard work, good players and good coaches driving the program.
But his focus remains on Friday’s game and improving each week.
“A win is a win. We have some talented kids, we need to continue to improve,” he added.