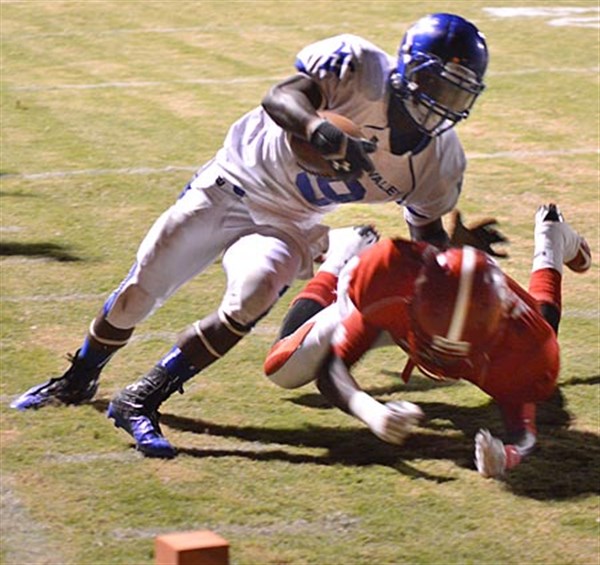 Junior Elijah Rogers heads for the endzone to score against Winona last Friday. Rogers scored two of the six touchdowns during the night. – Photo by Mark Anthony


WINONA–The Blue Devils (6-0) remain undefeated headed into division play after trouncing the Winona Tigers (1-5) 42-10 last Friday.
Now they will travel to Charleston to face a team that competed for the state 3A title the last two years– winning the championship in 2011–in what could be one of the toughest opponents they will face in regular season play.
“This is the first division game, and a big opponent, it definitely should be a fun one,” Coach Brad Embry told the Herald about the contest.
“Obviously Charleston got us the last couple of years, and won a state title, but our kids realized we can play with these guys,” Embry said.
“With a good week of practice we can go in confident, but not overly confident,” he added.
As work started Monday in practice, the Blue Devils were coming off two big wins in games played only four days apart, one on Monday and one on Friday, due to inclement weather postponing the first game against Senatobia.
“I am proud of the way we handled the adversity last week. Playing two games in one week is almost unheard of,” Embry said.

Blowout Against Winona
Although the Tigers struck first on a 35-yard field goal to take their only lead of the night, the Blue Devils responded with 21 unanswered points in the first quarter.
The first score would come on a six play, 60-yard drive that included a 20-yard reception from senior quarterback E.J. Bounds to Derrick Brady; and runs from Brandon Bounds and Elijah Rogers.
E.J. Bounds would actually take it in on a five-yard run with 3:34 remaining in the first quarter.
Brady’s catch would be one of seven receptions that E.J. would complete in 15 attempts on the night for 93 yards.
The Blue Devils’ next score came on a big defensive play by Kirkland Horton, who intercepted a pass at midfield and returned it 50 yards for six more points.
Junior kicker Alex Robles connected on his second extra point attempt in the game to put the Blue Devils up 14-3.  Robles connected on all six extra point attempts during the night.
The next score would come only seconds later after Mark Gooch recovered the football on the kickoff to Winona that was muffed.
A 16-yard pass to L.J. Hawkins, followed by a 10-yard run by Elijah Rogers put the Blue Devils up 21-3 with no time remaining in the first quarter.
After forcing Winona to punt in the first drive of the second quarter, turnovers would hamper the Blue Devils  as E.J. Bounds would throw two interceptions in the second quarter.
However the Blue Devil defense would stand strong, forcing a punt after the first interception and making a huge goal line stand against a gigantic Winona offensive line to keep the Tigers from scoring with just over a minute left in the half.

Second Half
The Tigers went three-and-out in their first possession of the second half, setting up Water Valley’s next score.
Starting at their own 39 yard-line, the Blue Devils drove down the field in 11 plays culminating with a three-yard run by E.J. Bounds to pad their lead, 28-3.
It would take the Blue Devils less than three minutes to find the end zone again, this time after Winona muffed another kickoff return, setting up the Blue Devils on their own 36-yard line. Five plays later Rogers scored on a two-yard run and it was 35-3.
Winona was able to keep the next drive alive, faking a punt, before scoring on a 21-yard pass to cut the lead to 25 points.
The Blue Devils responded with their final score of the night on a 61-yard drive. E.J. Bounds connected with Dillon Zinn on a six yard pass reception, but it was B. Bounds on five carries, including a six yard touchdown run, that moved the ball and accounted for the final touchdown of the night.
B. Bounds led the rushing attack for the night with 135 yards on 15 carries.  Rogers followed with 52 yards on seven carries.
Brady led receptions with 36 yards in two receptions. L.J. Hawkins followed with 31 yards on three catches.

Looking Ahead
“This game has definitely become a rivalry,” Embry said about the contest against Charleston.
“They are a different team from previous years, but are as good as they have been,” Embry added.
“Our kids have played hard every week. We have improved each week, and now with the start of division play, we have worked some of the kinks out and can concentrate on a game plan. It’s going to be a great opportunity,” he reported.