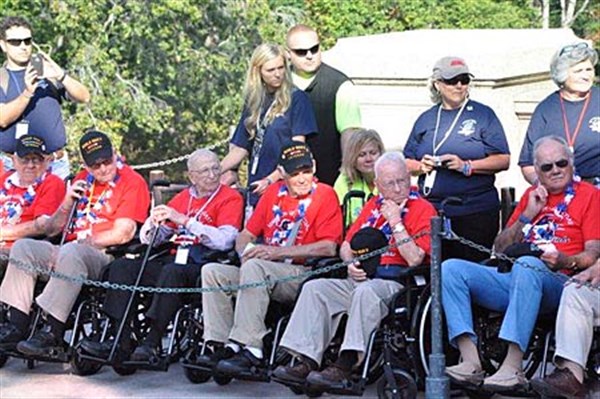 Dr. Rayford Edgar (second from right) was among almost 200 veterans from Mississippi and Iowa that arrived in Washington D.C. Tuesday morning at part of the Honor Flight, a program that assists WWII vets travel to the capitol to see their memorial. The national park was closed because of the partial government shutdown, but the group entered the barricaded area, sweeping past National Park Police. In this photo, the group pauses at the Tomb of the Unknown Soldier. We plan to have a report from D


WATER VALLEY – They have been called the greatest generation; the men and women who grew up during the hard times of the Great Depression and who went on to fight World War II.
That’s why the North Mississippi Herald will recognize the contributions of the veterans of that war in a special section to be published Nov. 7 to coincide with Veterans Day.
Although the section will honor all veterans, it will have special emphasis on World War II. Over 16 million served in the armed forces of the U.S. during from 1939 to 1945. The men and women who battled and prevailed in this great conflict are slipping away quickly–at a rate of just over 600 a day, according to recent U.S. Veterans Administration figures.
The Herald is seeking photographs, letters and personal recollections to be included in the section. Families are invited to contribute material from vets who are no longer with us.
Advertisers are urged to use historical material such as photos or reprints of ads from the era, if available. Information about employees or family members who served in prior wars is also appropriate.
Family members and friends who wish to honor a veteran may purchase personal ads, which start at $15 for a business card size space with a photograph.