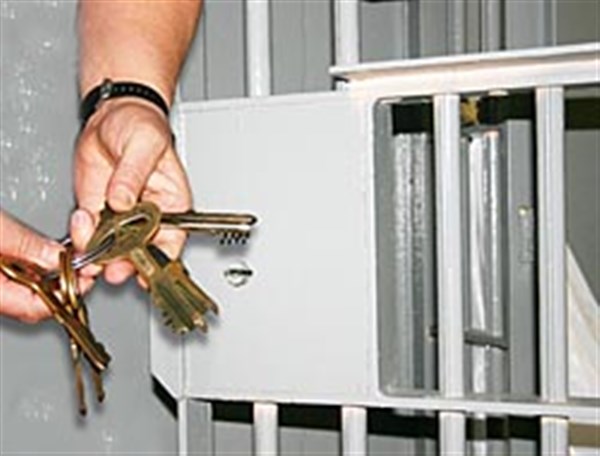 
COFFEEVILLE–Jail construction could start before the end of the year after supervisors voted unanimously to borrow up to $2.6 million for the project.
Working in a recessed meeting Monday morning at the Coffeeville Court-house, supervisors adopted a resolution that starts the funding mechanism for the project.
The lease-purchase agreement is expected to close in early November, taking advantage of interest rates that remained flat after an announcement from the Federal Reserve earlier this month that the government’s quantitative easing bond buying program will continue.
Securing the financing–estimated to be in the five percent or lower range–will also mark the start of the construction timeline which could take up to a year.
But before the financing resolution was approved county officials also unanimously approved an alternate location for the jail, scratching months of preparation to build on acreage adjacent to the Yalobusha County Complex, formerly known as the Carother’s building, located on County Road 436.
In the 4-0 vote, supervisors agreed to purchase five acres on Hwy. 32 East at a cost of $50,000 from Mike Williamson for the jail site, the appraised value of the property.
Board President Tommy Vaughn explained that the property had already been appraised and surveyed. He also explained that the change comes after county officials discovered the property was available and would be better suited for the new jail.
The site on County Road 436 had been identified as supervisors’ first choice because of the proximity to the sheriff’s department which is on the same tract of land.
But Vaughn cited driving factors in the change–a tremendous savings to the taxpayers  on the cost for infrastructure including running sewage and water over a mile to the site. Vaughn also stressed that the prep work on the Hwy. 32 site will be minimal.
“You don’t have to wait another year and let interest rates on these bonds go up,” Vaughn explained. “We should be able to lock in our bond rate about the first of November,” he added.
District 3 Supervisor Lee McMinn, who had initiated the contact with the landowner earlier this month, also pointed to advantages with the change.
“I agree, the sewage issue, the floodzone issue, the wetlands issue… it’s going to be a beneficial move in my opinion,” said Lee McMinn.
“It will save us surveying and getting easements,” Lee McMinn added, referring to  multiple easements that would be needed to run the sewage line across more than a mile of privately-owned property to the location on County Road 436.
“It’s in an industrial area already, so there should not be any issues as far as residential neighborhoods, it’s right across from the scrap yard, the old Bondofoam Building, and a farm shop,” Lee McMinn added.
Vaughn also explained a $365,000 ARC (Appalachian Regional Commission) grant to fund the water and sewage improvements to the former site likely can be converted for use on the new site. The county is required to provide $90,000 in matching funds for the ARC grant, an amount that may be reduced if the entire $365,000 is not utilized.
Another advantage outlined by Vaughn is that the ARC grant money will not be gobbled up by sewage and water improvements  at the new site and instead be used for other expenses that would have been required at either site including a parking lot and access road.
In addition to the grant funding, the county had also budgeted another $70,000 for the water line that can be eliminated from the project, Vaughn continued.
“People don’t understand how much work has gone in to  looking at this jail and discussing different locations,” Vaughn stressed.
“But being a small county and working with such a small tax base, we have to be vigilant on how we spend tax payers’ money. And we have been and will ‘continue to be. This will be one instance we are are willing to back up and forego all of that work we have done because we can save,” he reiterated.

Questions
After input from both Vaughn and Lee McMinn, District 5 Supervisor  Frank “Bubba’ Tillman had several questions about the project.
First, Tillman asked if the ARC grant could have also been used for yet another location  previously discussed at the Coffeeville Industrial Park that was initially considered after Coffee-ville city officials offered to donate land for the jail.
Tillman had favored building the jail inside the Coffeeville Industrial Park, instead of the site on County Road 436.
His question was directed to North Central Planning and Development District director Steve Russell, who said the grant money likely could have been used in Coffeeville if that had been the board’s desire.
Tillman then asked about housing state inmates at the new facility.
Vaughn said the plan was to add state inmates sometime after the jail is constructed.
“We are going to have to build that on our own,” Vaughn said, “That was the plan anyway.”
Vaughn also acknowledged that both Coffeeville and Water Valley offered to donate land for the jail.
“Coffeeville offered to donate that land and we very much appreciate it. So did the City of Water Valley on this property here. I think it is the board’s idea that this is a county jail. It’s outside the city limits of Water Valley. We are going to do the work and pay for it with county money,” Vaughn said.
Financing
Fielding questions about the estimated payment, Chancery Clerk Amy McMinn said the annual payment will be under $184,000, the magic number identified by county officials as an amount that can be retired without a tax increase.
Supervisors have carefully guarded unallocated millage during the 2012-13 fiscal year to make the payment. The millage had previously been allocated to a hospital bond payment that has been retired.
The lease is a for a 20-year term set up through a non-profit organization established by the North Central Planning and Development District. At the end of the lease, the county will take direct ownership of the jail.