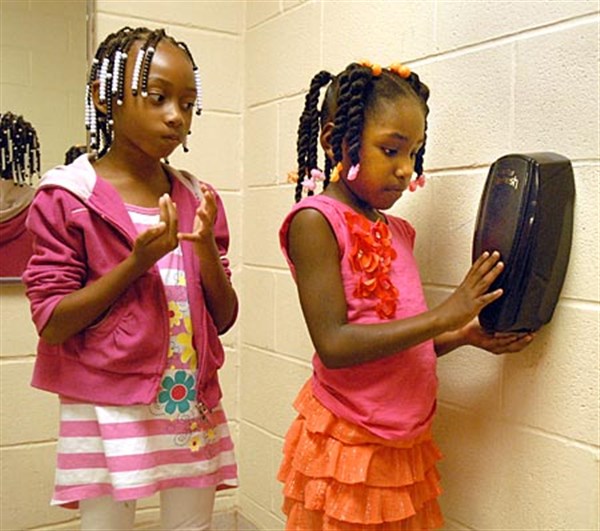 First grade student Kasaiyah Young (left) waits her turn as kindergartner Ajaida Joy gets a handful of soap at Davidson Elementary School. The kindergarten classes were recognized for their responsible use of the liquid hand cleanser. – Photo by Jack Gurner

Kindergartners Praised For Responsible Soap Use


WATER VALLEY – Kindergarten students at Davidson Elementary School have been recognized for their responsible use of soap.
Superintendent Kim Chrestman told school board trustees at their meeting last week that soap is back in the student restrooms this year and praised the kindergarten kids for their use of the liquid hand cleanser.
“We are encouraging the students not to waste the soap and play in it. There have been several instances where soap has been squirted on the floor or excessive amounts have been smeared on the sinks,” he explained. “Kindergarten has been the most responsible with the use of soap.”
A parent complained in the Herald last December that the school system should have enough money to provide soap in the school restrooms. In a follow-up letter to the editor the next week, a teacher explained that lack of funds wasn’t the problem, but the irresponsible actions of some students who wasted not only soap, but also other supplies such as towels and toilet paper. “When students habitually waste these products, it becomes senseless to keep restocking them,” the teacher added.
Superintendent Chrest-man noted that the school nurse spent time with the kindergarten through 3rd grade students talking to them about proper hand washing techniques, how to stay healthy and how not to spread germs.
The superintendent also reported that in February 2013, Water Valley School District had an accountability audit by the Mississippi Department of Education.  In September the SDE cleared the district of any standards that were not met in full.  “Water Valley has been notified that its school rating is ‘accredited,’” he said.
Among other actions at the Sept. 23 meeting, trustees:
• Entered into an agreement with architect William Mills to pursue heating and air conditioning and window replacement projects for next year.
• Gave permission for the BETA Club to go to an out-of-state event.
• Approved an agreement for rehabilitation therapy services through Yalobusha General Hospital.
• Accepted a $350 donation from the Rotary Club and a $150 donation from Guardian Pest Control for the light bulb project.
Chrestman explained that the light bulb project came out in a recent audit. The school district is required to put plastic sleeves costing about $1.80 each on every fluorescent bulb in the DES classrooms. “We’ve installed 300 of them and probably have about a 1000 more to install,” he said.
“That just shows the community support for the school system,” said Trustee Pierce Epes.
• Approved school bus turnarounds.
• Paid docket of claims.
• Heard a financial report from District Business Manager Randy Goodwin, who told trustees that the fund balance in the district maintenance fund as of August 31 was $1,792,362.33.


WATER VALLEY – Teacher’s paychecks could be short a few dollars in August of 2014 because of the state law that pushes the start of school to no earlier than the third Monday in August.
The law, passed in 2012, is intended to extend the tourism season and pump $100 million into the state’s economy, according to supporters. However, many educators have said that it will require condensing the school year to absorb some of the two weeks lost. By law, schools are required to have 180 days of instruction.
There is a new twist, Randy Goodwin, Water Valley School District business manager, told school board trustees at their meeting Sept. 23. “By the Mississippi Constitution our teachers will not have earned one-twelfth of a salary in August.”
If nothing changes, teachers will get a prorated check that month, Goodwin said. They will eventually receive all their pay, but their August check will only be about half the usual amount.
Goodwin added that Jim Keith, attorney for the Mississippi School Board Association is urging their members and others to contact their legislators about the issue while there is still time to correct it.
The start date for the 2014-2015 school year is set for Aug. 18. According to Keith, they would only have to push the date back to Aug. 11 to be within the constitutional requirements and be able to give teachers their full paycheck.
According to Goodwin, Keith said that if the two weeks difference would really put $100 million into the coast economy, it would be different. “Who’s coming to the gulf coast in August?,” Goodwin quoted Keith as saying.
In another development involving schools and money, Goodwin said that the Mississippi Legislature is about to redo Mississippi’s Adequate Education Pro-gram funding. Since its inception, the program has been under-funded by $1.62 billion dollars, $275 million in just the past two years.
“Instead of funding it where it is, they are going to redo the formula to fund it where they are now so they can say they are fully funded,” noted Superintendent Kim Chrestman.


First grade students have been studying animals that help people.  At the end of the unit, the students were given a surprise visit by the Oxford Police Department K-9 Unit.  Officer Boyd brought Baraka (K-9 Officer) and demonstrated to the students how he assists them in keeping criminals off the streets.  The students learned that Baraka responds to French commands and the best part of Baraka’s job is getting to play with his special ball as a reward for keeping the streets safe.  The students enjoyed Baraka and Officer Boyd playing tug-of-war.

Third grade students were favored with a visit from Mrs. Redwine of the Mississippi Extension Service at the culmination of their unit on healthy foods.  The students learned how foods are grown from the ground and the benefits of eating healthy.  Students finalized the day with a “healthy eating party” where they sampled fruit and vegetables provided by classroom parents.

Our school nurse has spent time in K – 3 grade talking to the students about proper hand washing techniques and how to stay healthy.  She has also spoken to them about how not to spread germs.

Professional Development has been centered on professionalism when dealing with students and parents and closer supervision of students throughout the building.  The administrative team is encouraging teachers to monitor students closer during recess to minimize the number of discipline problems that could arise as a result of students not being monitored.  This is just a proactive measure to keep our students safe.  The administrative team is also providing examples of “best practice” to teachers in their weekly communication from the principal.

Professional Learning Community (PLC) leaders and topics have been assigned ranging from Leadership on the Line to Bridging Gaps through effective parent communication and student engagement.

The PBIS Committee has started the HAT activity, whereas random classes are chosen by the committee to see if everyone in the class has their Homework, 100% Attendance, and no Tardy on any given day.  The classes that meet the requirements are allowed to wear their favorite HAT to school on Friday.

Davidson Elementary has had the entire parent breakfasts this year and according to the teachers, there was an increase in the number of parent/guardians attending.  Kindergarten through Sixth Grade teacher planned activities for parents before eating breakfast with their child(ren).

The janitorial staff has added sweeping rooms to their daily rotation; they are also adding a mop rotation once per month to every classroom.  Soap is in the student restrooms this year.  We are encouraging the students not to waste the soap and play in it—there have been several instances where soap has been squirted on the floor or excessive amounts have been smeared on the sinks.  Kindergarten has been the most responsible with the use of soap!

WVHS crowned Shakeisha Harris 2013 Homecoming Queen in homecoming ceremonies on Friday evening in the high school gymnasium.  Congratulations to Shakeisha for being selected by the student body to represent the school and community as the 2013 homecoming queen.

Senior Portraits and School Day Pictures will be taken on Tuesday, September 24.  This is a major project for our yearbook staff and we thank them for all of their dedication to producing a quality yearbook for our school and community.  The group is sponsored by Ms. JoAnn King.

WVHS students have an opportunity to participate in “See You At The Pole” activities on Wednesday morning at 7:00 in front of the high school.  Anyone from the community is welcome to join attendees at this event.  “See You At The Pole” is sponsored by the Bible Study Club and FCA.  On October 1 from 7:00 a.m. until 10:00 a.m. selected members from FCA will participate in Mississippi Glowing for Christ.  Our huddle’s assignment is to carry the cross from Coffeeville to the Grenada County Line.  Sponsors for both clubs include Clint Faust, Casey Clouse, Andrew McNeece and Dianne Webb.

SATP retesting in ongoing this week with U.S. History and Biology I on schedule.  Ms. Dickerson, Ms. Vollbracht and Ms. Carwile had led the testing sessions along with several staff members.  Tests are being administered on-line and this is the first time for all testing to be conducted under this plan.  Reports are positive thus far with the new process.

Our Blue Devil sports teams are in the thick of the season with both Volleyball and Football being very busy with activities.  Our teams are representing our school in a very positive light and we thank Head Coaches Brad Embry and Casey Clouse along with their assistant coaches for their leadership with so many of our young people who are involved in these programs.

Ms. Hamilton, Ms. Hill, Ms. Hodge and Ms. Bowen attended the Mississippi Council of Teachers for Mathematics conference over the weekend.  Early reports are that they gleaned a lot of information from the conference and with that comes additional questions regarding Common Core.  These ladies along with Ms. Varner and Coach Faust are taking proactive measures as the change-over to Common Core unfolds.  We want to thank them for their willingness to attend the conference.

In February 2013, Water Valley School District had an Accountability Audit by the Mississippi Department of Education.  In September 2013, the SDE cleared Water Valley School District of any standards that were not met in full.  Water Valley has been notified that its school rating is “Accredited”.  In the same Accountability Audit of 28 school districts, the Commission on School Accreditation reported that extreme emergencies exist in the Claiborne County, Yazoo City and Leflore County school districts.  The Board is considering requesting that the Governor declare a state of emergency in these districts, which could lead to the Board appointing conservators in these three districts.

On September 16, Water Valley School District had an Asbestos Audit by the state.  WVSD received and “all clear” audit with no findings.

WVSD School Board members will be attending Mississippi School Board Training at South Panola High School September 23-24.  This is annual staff development for SB members.