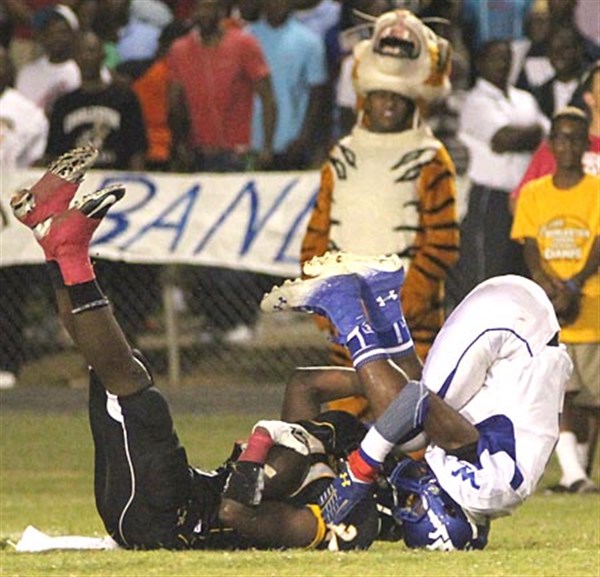 Kirkland Horton flips backward as he makes a tackle in last Friday’s loss against Charleston. – Photo by Claudia Anthony 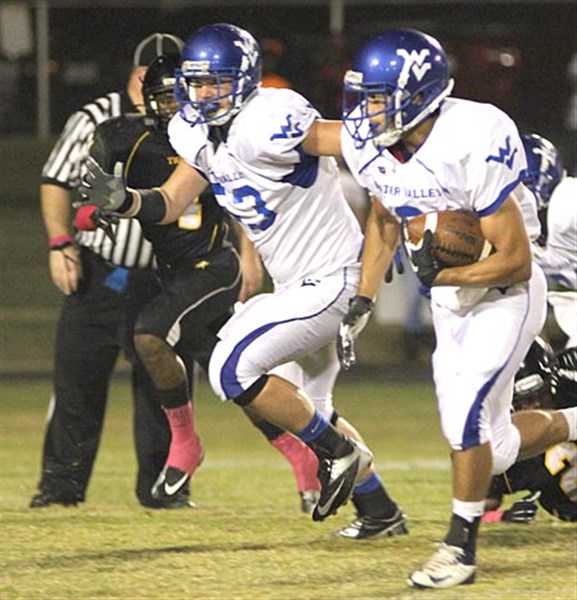 
CHARLESTON–The Blue Devils (6-1) dropped their first game in Region 2-3A play last Friday after falling to the Charleston Tigers (6-1, 1-0) 42-10.
Now Coach Brad Embry is looking for a good week of practice and big win Friday against Holly Springs to even the record in region play
“This is a big game, we got to get even in the region and we need to play better,” Embry said about Friday’s contest.
“They have some good athletes,” Embry said of Friday’s game.
But his focus rests less on each opponent his team will face in the remaining four weeks of regular season and playoff games. Instead, Embry said “we need to focus on us.”
For Embry, Friday’s loss wasn’t a matter of effort for his athletes who played hard the entire night against Charleston.
“Effort was not the problem, we just did not execute,” Embry explained.

Charleston Loss
It was the big plays that accounted for the touchdowns on the night and helped keep the momentum away from the Blue Devils as Charleston sealed their win mid-way through the third quarter.
The Tigers took the lead early in the game, scoring a touchdown on an 81-yard drive on their first possession to go ahead 6 -0.
The Blue Devils responded  with a 26-yard field goal by junior kicker Alex Robles late in the first quarter.
Charleston would find the endzone two more times in the first half to lead 17-3 at the end of two quarters. However a big defensive stand late in the second quarter kept the Charleston team from scoring a fourth touchdown in the final seconds of the first half.
Charleston received the ball to start the second half, but were unable to convert and went three-and-out as defensive coordinator Jeff Roberts  made half-time adjustments to counter Charleston’s ground attack.
The Blue Devils then marched 72 yards down the field for a touchdown during their first possession in the second half.  The drive was capped by a nine-yard touchdown pass from Elijah Rogers to Dee McNeal for Water Valley’s sole touchdown in the game.
The score cut Charleston’s lead to one touchdown, 17-10,  but the Blue Devils were unable to stop the Tigers on their next drive as they marched back into the endzone on five plays, including a 46-yard reverse play to go ahead 28-10. The Tigers would score two more times, the first on a 89-yard run with 1:40 remaining in the third quarter. An interception thrown by quarterback E.J. Bounds was returned for the final score of the night.
The senior signal caller completed 10 of 28 attempts in the game for 96 yards. He carried the ball 17 times for 24 yards as the Tiger defense worked to shut him down during the game.
Water Valley recorded 179 rushing yards in the game while the Tigers racked up 423 yards rushing.
The Blue Devils mustered 104 yards in the air with Trey Alexander leading receptions with four completions for 31 yards. The Tigers had 83 yards on four completions.