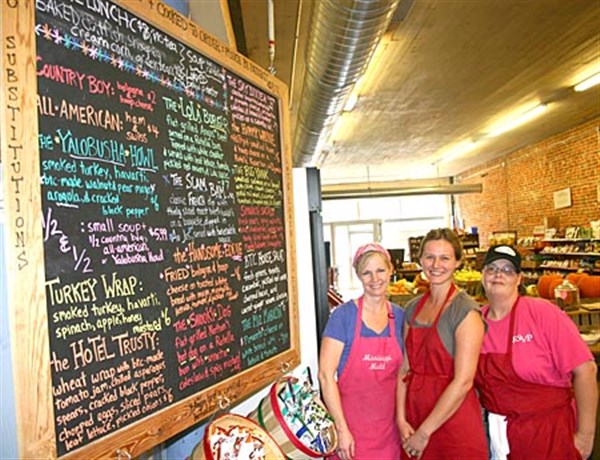 The addition of a shiny, new stove at the B.T.C. Old Fashioned Grocery warranted a much larger menu. The girls at the B.T.C. (from left) Cora Ray, Alexe van Beuren and Dixie Grimes still prepare all the food from scratch. – Photos by David Howell 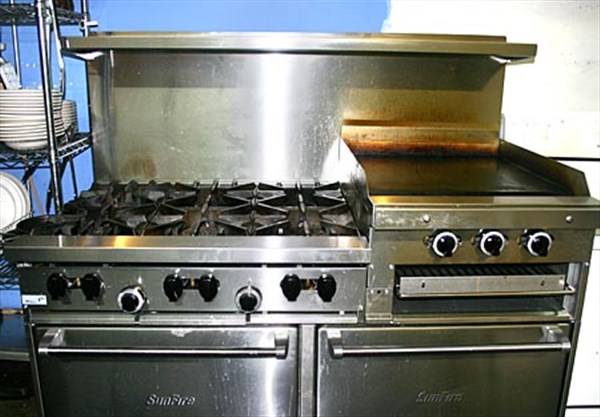 Lola has two ovens, a griddle and six burners.


WATER VALLEY–The arrival of Lola has brought exciting changes to the menu at the B.T.C. Old Fashioned Grocery Store.
Lola is a new, commercial-grade gas stove that includes six burners, a 24-inch griddle and two ovens. The shining, stainless steel stove was named by B.T.C. head cook Dixie Grimes and means everything is cooked with love.
The purchase was funded with a $5,000 prize B.T.C. owner Alexe van Beuren claimed after competing for Intuit’s Small Business Growing Strong campaign. She outlined her need for a commercial grade stove and competed for votes against thousands of applicants to claim one of 15 prizes awarded.
The addition is a game changer for the B.T.C., Grimes, Cora Ray and Lori Ward had been using two small, electric stoves designed for home use.
“I don’t know how we went as long as we did with those two little stoves. We figured out how to do it, but I did not think it was possible when I first came here,” Grimes said.
“I was really astonished at how many people voted for us and shared our status on their page,” van Beuren said of the contest. She solicited votes using social media to bolster her entry.
“It wasn’t just a numbers thing but the votes were important,” she explained. Her contest application also mentioned an exciting cookbook-deal, The B.T.C. Old Fashioned Cookbook: Recipes and Stories from a Southern Revival. The cookbook is due out next spring and includes some of Dixie’s favorite recipes. Some of the recipes were added to the B.T.C. menu with the addition of the new stove.
The stove upgrade created quite a bit of work including a new gas hookup, a new vent-a-hood and a fire suppression system at a cost that went well over the $5,000 prize.
“But we would not have done it if we had not won the money,” van Beuren explained.
Beuren’s husband, Kagan Coughlin, did much of the labor. They actually got it hooked up over Labor Day weekend and debuted the new menu on October 1.
The original B.T.C. menu was scratched on a chalkboard beside the lunch counter. The new menu called for a larger chalkboard and includes additions named for local characters and former landmarks.
Among new items are a smoked salmon on a bagel named The Big Yank; a flat grilled Nathan’s hot dog on a Rotella bun named the Snooky Dog; a fried bologna sandwich named the Handsome Eddie; a flat-grilled Angus burger topped with a special Lola sauce appropriately named the Lola Burger.
The menu also includes a plate lunch on Wednesdays, Thursdays and Fridays. That’s on top of the long-established menu items that includes soups, sandwiches, salads and Ray’s baked goods.
Van Beuren is quick to note that their quality will not change with the expanded menu.
“As always, everything that comes out of Dixie’s kitchen is made from scratch,” she reports.
Each hamburger patty is individually made from the finest beef–100 percent Angus that is certified antibiotic and hormone free.
Despite a soft-rollout of the new menu items, news traveled fast last week and by Friday the line at the lunch counter stretched across almost half of the store as customers waited to place their orders.
“We can seat about 40 right now and we plan to add another 15 seats in the next month,” van Beuren reported. “Our goal is to make the customers happy.”