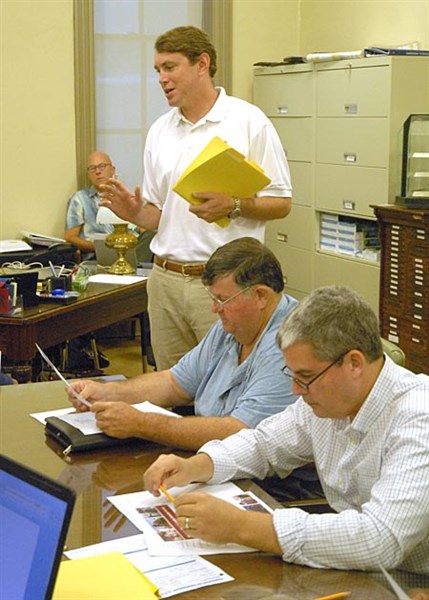 
COFFEEVILLE–Yalobusha is one of four counties selected across the state by the Mississippi State University Extension Service (MSU-ES) to add a new county agent who will work in economic development.
The new agent will work in economic development  alongside existing Extension Service staff members in the Coffeeville office.
Sumner Davis, Govern-mental Training Specialist with the Center for Government Training and Technology in the MSU-ES, outlined the new  position during a meeting with county officials on Sept. 24.
Davis explained that the Extension Director, Dr. Gary Jackson, has placed emphasis on community development programming as part of the Extension Service.
“We were fortunate enough to get some money to start a program of putting extension agents with community development focus into county offices. Yalobusha County is one of the first four counties in the state that we are doing,” Davis explained.
Davis said the position will be fully funded from the Extension Service. He also said it will be a permanent position.
“The support we are asking for y’all is the same support you are already giving us with facilities and offices, we are not asking for anything, dollar wise,” Sumner explained.
Davis also said the position will compliment existing efforts geared toward economic development in the county, including the chamber of commerce, Main Street and county’s economic development organization.
“The position is going to be an extension agent. They are going to work here in your county, they are going to live here in your county. They are going to work with our county staff on the overall extension mission.
“We are not trying to come in and replace anybody’s efforts. Hopefully this person will be a conduit to leverage assets out of the University back into your county,” Davis added.
Applicants can apply online at msucares.com. The position was opened 9-16 and will remain open until filled.
Davis said once a pool of candidates is identified, interviews will get underway in the county. He also said MSU-ES Yalobusha County Director Brent Gray will be involved in the interview process, and input from supervisors is also welcomed.
“Sounds like it will be a worthwhile program,” Board President Tommy Vaughn said at the conclusion of Davis’ comments.
“We are pretty lucky to get picked,” District 3 Supervisor Lee McMinn added.