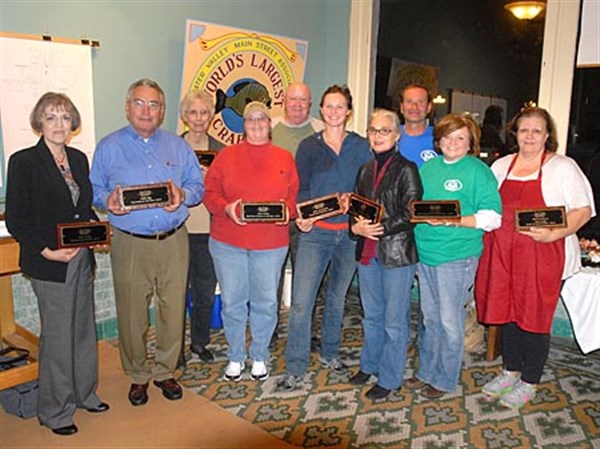 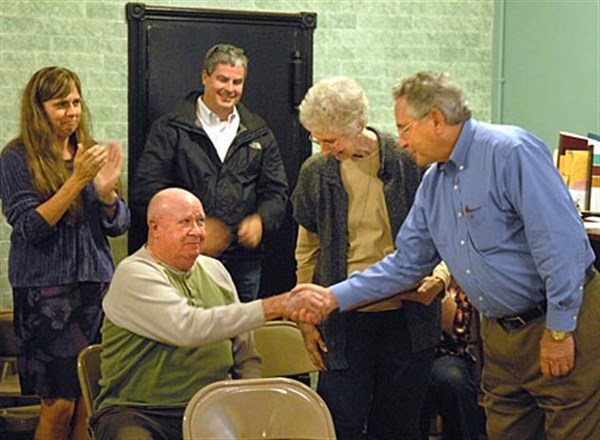 Wilbur Herring (seated) smiles as he and wife, Carline, are congratulated by WVMSA President Eddie Ray for being honored as Farmers Market Best Growers. 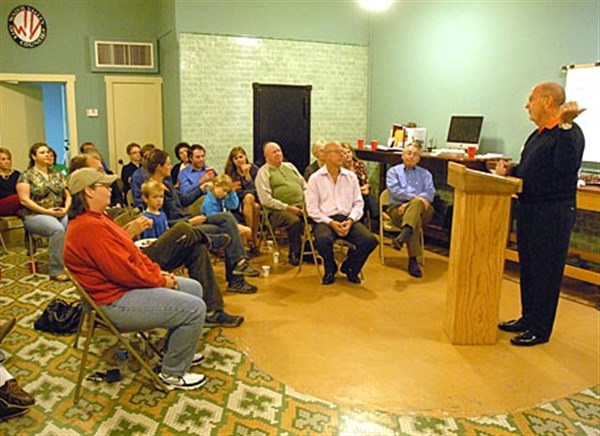 Mayor Larry Hart spoke to the Main Street Group about the grant to refurbish and overlay Main Street.

WATER VALLEY – If the center is strong the rest of the town will prosper.
That is the philosophy behind the Water Valley Main Street Association, according to Mickey Howley, director of the group.
Howley, who spoke at the annual general meeting last Thursday night, said the organization works because it is a collective effort. “We have city involvement. This is a non-profit organization that has private and public support.”
Howley added that there is also a wide variety of individuals who are involved in the program. “On the board there is a 40-year span in age. In the organization in terms of the oldest member to the youngest member it is 50-something years.”
“No other town in Mississippi has that range,” Howley noted. “That’s a tremendous buy-in and I think that says a lot about Water Valley.”
A number of things have changed in the six years since the WVMSA was charted. “What’s changed downtown is the possibility of going out to eat,” Howley said and added that shopping has also changed and that many are now referring to Water Valley as an art town. “We do have a pretty good art scene going her right now and a pretty good art council.”
Howley presented the latest figures regarding growth downtown over the past six years including 60 jobs, 18 businesses that have stayed in business and over $2 million dollars in private investment. “We think that collectively it has changed the quality of life in town. But,” he said, “there is a long way to go. There are still buildings that need a lot of work.”
Looking to the future, Howley said there would be a push toward upper floor housing downtown. “To take those buildings that are two stories and put something upstairs in them.”
Later in the meeting, Wilbur Herring good-naturedly challenged Howley by saying that the main ingredient in the WVMSA is enthusiasm. “You can’t have anything without that,” he said. “And, thank goodness young people have it,” he continued, “because us old folks don’t have it.”
Herring made that pronouncement as he and wife, Carline, received the Best Growers at the Farmers Market award. The Herrings were among a group of WVMSA volunteers who received awards at the meeting and who are listed in Mickey Howley’s “Street Talk” column under the “Herald Columnists” to the left.