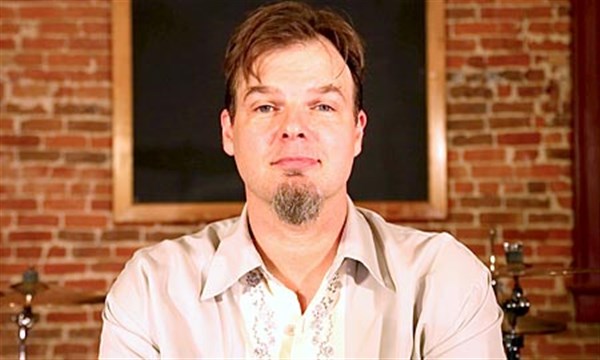 Bryan Ward will release his latest album, Sacred Cows, in a Thursday party on the second floor of the B.T.C. Old Fashioned Grocery. – Photo Provided

The provocative cover of Sacred Cows album illustrates Bryan Ward’s rendition of the Parable of the Wedding Banquet described in Matthew 22:1-14. Artist Thomas Grosskoph painted the cover from a sketch made by Ward and depicts a clash of characters. The cover acknowledges the darkness with the light, according to Ward. – Image by Thomas Grosskopf


WATER VALLEY–Thursday night marks the release of Sacred Cows, a Christian album recorded by Water Valley musician Bryan Ward.
The release party is scheduled on the second floor of the B.T.C. Old Fashioned Grocery from 7:30 to 9:30  with a plethora of Ward’s musical friends as well as brothers and sisters in Christ as special guests.
Ward is a talented musician who has enjoyed a career that has spanned decades. It’s also a career that experienced a drastic conversion after he accepted Christ  in 1999.
Ward’s songs now reflect that change in his life. Sacred Cows includes a mix of songs–Negro spirituals and Ward’s own songs about faith and change through Christ–with his unique acoustic style.
The record is an opportunity for Ward to help people who want to be blessed and start a fight with others who don’t want it.
You see, Ward doesn’t mince words–not on his past which was riddled with drug abuse and heathen living; or on the role of the modern church to welcome the dregs of society into their flock; or on the opportunity for any sinner, no matter how dark their past, to be accepted by Christ as a member of His church.

Becoming a Believer
Ward came to know the Lord on a spring morning at a time when his life was at an all-time low.
He had met Steve Thompson in  Nashville. Thompson hooked him up with several gigs at The Gin in Oxford and the two bonded. Ward believes that connection was fate.
“Steve said there was a reason we had run into each other. He explained Jesus to me. I thought–that’s it,” Ward explains.
It was a radical conversion, a conviction of all the things he had done in his life.
“The drugs had to go. I had to quit the band because I knew that if I kept staying out there, all of the lusts and addictions were going to be there,” Ward added.
Before accepting Christ, Ward had been playing with Bonepony, an acoustic rock band with an Appalachian twist. It was a band that almost went big.
“We had a huge record deal with Capital in 1995 and we were supposed to make it,” Ward explains.
But the very thing they had been singing about, love and peace, was not part of the band’s off stage character.
In fact, Ward considers himself a former member of the devil’s army during his days as a member of Bonepony. “We were heathen maniacs,” he said.

Walking The Walk
“Once I got saved, it took another 10 years to start figuring out what was the important thing to me,” Ward explained. “I am not a preacher, I have no seminary degree. But I try to live it.”
A big part of his ministry includes reaching out to inmates through the Kairos Prison Ministry.
Ward’s flock ranges from the most hardened inmates on death row in Parchman to the inmates at the county jail during weekly services that he and Liz Reynolds hold.
“There is a Jesus that is in there that we don’t see out here,” Ward explains. “There is a bunch of violence that runs head to head with glory and grace,” Ward adds.
His musical talent is also a spiritual gift he put to work to share the message and during the last decade he has recorded multiple spiritual records.
“I did step out of the box to do Thompson Ward, but it’s really a spiritual record,” Ward said of the carefully crafted lyrics he and Thompson shared several years ago with the release of Porch Funk.

Coming To The Valley
Ward grew up in Maryland in a family that did not know the Lord or attend church. But even growing up outside the south, Ward understood racism.
“We all have something  that is central in our hearts. For me, mine is racism. Mine is drugs. When I first got to town, I joined Everdale M.B. Church,” Ward said.
Likely the only white member of an African American Church, he joined because he really didn’t like black people.
“My dad was a hater. I had to unlearn the hate,”  Ward adds.
The atmosphere also linked Ward to the rich tradition of Negro spirituals that would ultimately be woven into his music ministry.
“I learned all these songs at Everdale Church. When I went to prison, I started playing all the songs I  learned.
The connections he has made in the Valley have been a big part of the production of Sacred Cows. The funding came from people in town who wanted to help Ward and his ministry. He was able to raise a significant amount of money to produce the album.
Although the songs of faith and grace are a strong part of the album, the cover art is also part of his message.
It’s Ward’s rendition of the Parable of the Wedding Banquet described in Matthew 22:1-14.
The banquet is the celebration of those who enter the kingdom, and the exclusion is the judgment of God for those who reject the invitation of grace.
Just as Jesus ministered to publicans and sinners, Ward believes that the role of the modern church remains the same.
The message is illustrated by the radical cover. It’s an illustration artist Thomas Grosskopf painted from a rough pencil sketch made by Ward. It depicts the wedding banquet in a provocative manner.
Cowboys and indians seated at the table, Martin Luther King, Jr. and klansman sharing another table.  Christ with Mother Teresa and a prostitute. The Beatles on stage, the clash of characters is strong.
“It’s to acknowledge the darkness with the light,” Ward explains.

Giving Back
Thursday’s release is an opportunity to give back to a community that embraced and nurtured him as a Christian. It’s also about making the financial investment from donors who helped fund the album be an investment that will help others.
“I don’t have any debt on the record. All proceeds will go to the Branch of Hope ministry,” Ward explains.
The Branch of Hope is a local ministry, a half-way house for men struggling with substance abuse.
“I have a real heart for the people who cannot get clean,” Ward reiterates.
“We want people to come to this record release party. They can buy a CD,” Ward adds. Also available are signed copies of the cover art. He wants the checks to be written to the Branch of Hope.
Ward’s passion runs much deeper than his latest release or his ministry.
“This town is doing something pretty neat. There is sort of a small revival starting to build,” he explains.
“First Baptist Church has stepped in a lot. A lot of the Branch of Hope guys are going there. The same with the Methodist Church,” Ward adds.
“I think that it is time to lift that up. I think a lot of people in town would like to get behind this,” he adds.