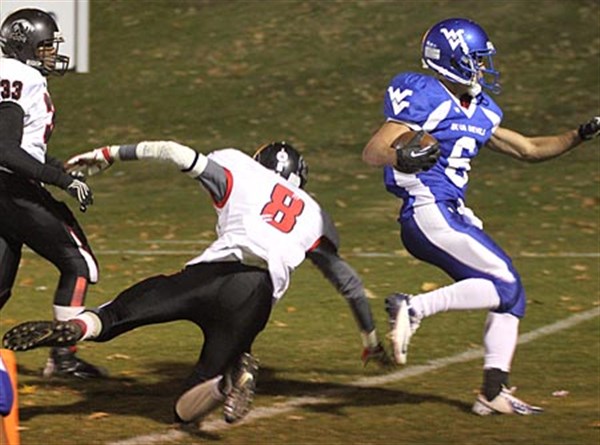 Brandon Bounds crosses the end zone to score one of nine touchdowns of the night against Independence. – Photo by Claudia Anthony 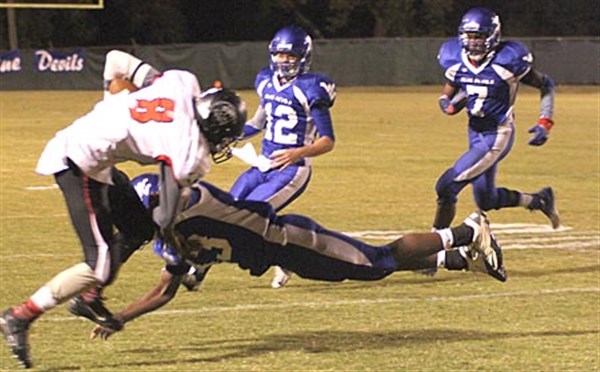 Gary Bolden gets horizontal as he makes a tackle against Independence last Friday. – Photo by Claudia Anthony 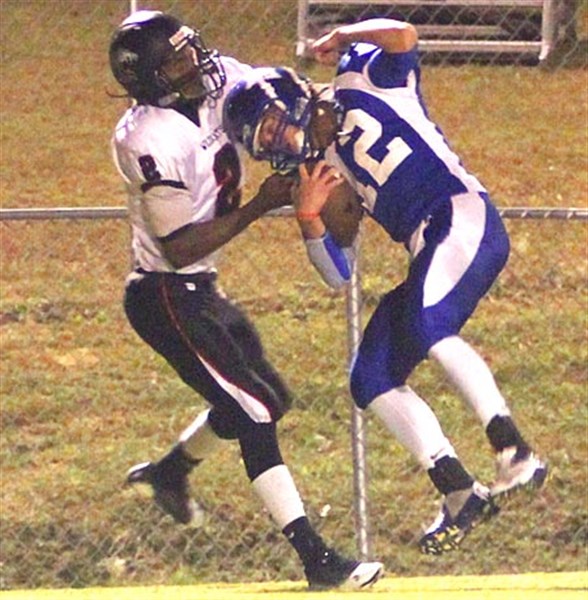 Like other schools in the state, the Blue Devils have experienced poor officiating including this missed call on a horsecollar tackle. On another play, Cortevous Hawkins blocked a punt and marched it into the endzone. However the officials marked it at the one-yard line. On the next play, coaches put Hawkins back in as a running back so he could finish the job. – Photo by Claudia Anthony


WATER VALLEY–The Blue Devils cinched the second place spot in Region 2 with a decisive win 60-20 over Independence last Friday at home.
Water Valley (9-1, 3-1) put up five touchdowns in the first half, while Independence registered one big 70-yard drive early in the game that accounted for their sole score in the first half of the game.
The Blue Devils scored four touchdowns in the third quarter, substituting younger players early in that period as the lead expanded. Independence (4-6, 2-2) was able to score two more touchdowns against the younger squad.
“I think we came out and played well from the opening kickoff,” Coach Brad Embry said about his team’s effort. “They played with a lot of passion and intensity, that’s the way we do it in Water Valley,” he added.
Embry was also proud to get playing time for his junior varsity players.
“They earned it, it’s unfortunate that only 11 can play at a time. It’s good when everybody gets rewarded,” he told the Herald.
Junior Elijah Rogers was first to find the endzone on a 14-yard touchdown run on the Blue Devil’s first possession. He scored on Water Valley’s next two possessions including a 33-yard touchdown pass from senior quarterback E.J. Bounds and a four yard run early in the second quarter.
E.J. Bounds was next to score, taking it in on a 17-yard run. The senior signal caller led his team in rushing yards, recording 109 yards in 12 carries.
Seniors Cortaveus Hawkins, Robert Mays also scored on rushing plays, while seniors Trey Alexander and T.T. Person scored on receiving plays.
Junior Brandon Bounds also scored for the Blue Devils, bringing the total touchdown tally to nine. Junior kicker Alex Robles connected on six extra-point attempts.
“It was a big night, especially for our seniors,” Embry said.
Defensively, senior K.J. Lee recorded six tackles, while seniors C.J. Hawkins, Hunter Stanford, Gary Bolden, and Dakendrick Gooch all recorded five tackles during the night.  Other seniors making stops include Lee Mitchell with  four tackles,  T.T. Person with three tackles, Quintez Holmes with two tackles and Montez Hairston with one tackle.
The win marked the last home game during regular season play for 16 seniors who were honored during the night.
This same group was entering the seventh grade when Embry took over an ailing football program.
They went undefeated as seventh and eighth graders, winning 16 straight games in junior high. They have logged another 41 wins in high school play during the last four years.
“They are an athletic group, obviously,” Embry said. “But if you go back and look at the type of kids they are, it’s more than that. They make good grades, they are good kids.”
On The Road
On Friday, the Blue Devils travel to Marks for their last regular season game of the season. It’s a game Embry doesn’t want to overlook as the region play ends, but he is also looking ahead.
“Obviously we are preparing for Marks Palmer, but we are also thinking about the playoffs. We started thinking about the playoffs back in December. The closer we get, the more we prepare. We’ve got to be ready mentally and physically,” Embry said.