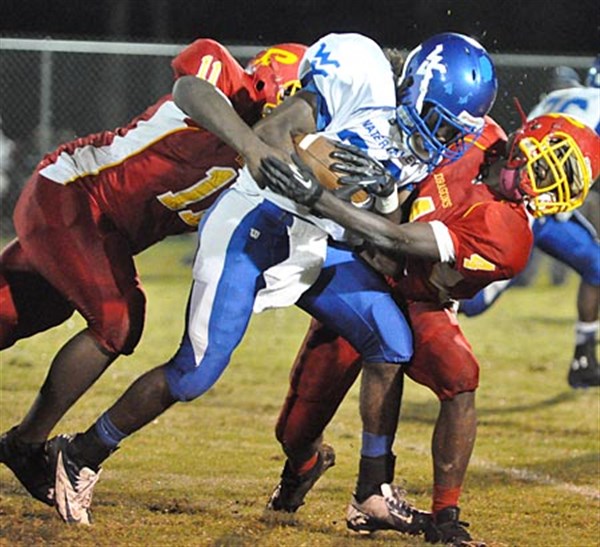 Robert Mays churns out extra yards with two Dragons in tow against Marks last Friday. The win put the Blue Devils at 10 for the season. – Photo by Mark Anthony 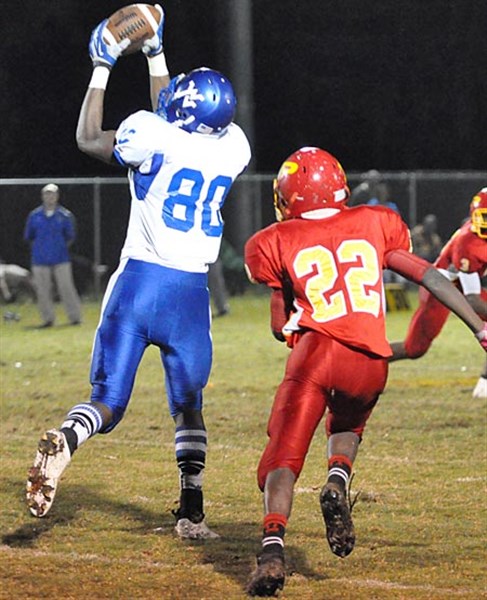 Derrick Brady scored on a 73-yard reception, one of seven touchdowns on the night. – Photo by Mark Anthony 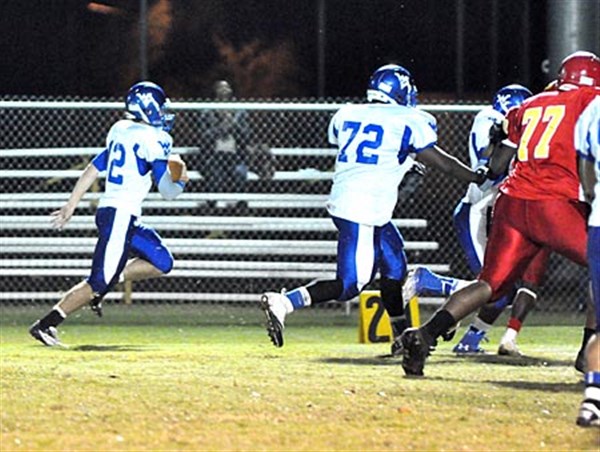 Jonathan Kent puts the Blue Devils on the scoreboard first with a 45-yard pick six. Photo by Mark Anthony


MARKS–The Blue Devils (10-1, 4-1) wrapped up their regular season with an impressive win over M.S. Palmer– a victory that notches Coach Brad Embry’s fourth consecutive 10-win season.
The Blue Devils were first to strike in the contest, the score coming after both teams were forced to punt in opening drives.  The score came on a 45-yard pick-six by Jonathan Kent.
The Dragons (2-7, 1-4) would answer with a freak fumble that squirted the ball down the field, past the Blue Devil defense, allowing the Dragons to pick the ball up and take it into the endzone.
“We covered the play really well, we stopped it in the backfield,” Embry said about the score. “The ball just rolled the wrong way,” Embry added.
The Dragons’ two-point conversion was good, M.S. Palmer took their only lead for the night, 8-7, with three minutes remaining in the first quarter.
The Blue Devils would answer on their next possession, grinding out a 65-yard, 17 play score that came on a four yard touchdown run by Brandon Bounds to put the Blue Devils ahead 14-8.
But The Dragons would only take one play to even the score with a 70-yard break-away touchdown run by their quarterback. The Dragons’ score marked the turning point in the game, as Water Valley’s defense shut them down for the rest of the night and the offense recorded five unanswered touchdowns.
“They got a couple scores early, some good fortune on their part,” Embry said.

Turning Point
Water Valley’s surge started just two plays after the Dragons’ touchdown with T.T. Person finding the endzone on a 59-yard run to go ahead 21-14.
After forcing M.S. Palmer to go three-and-out,  quarterback E.J. Bounds connected with Derrick Brady  two plays later for a 73-yard reception for another touchdown.
The Blue Devils would force another punt during the next series for the Dragons. Water Valley would record their final score in the first half  on a 60 yard, four-play drive capped off by a 37 yard pass from E.J. to L.J. Hawkins. Alex Robles would kick his fifth successful extra point, putting the Blue Devils up 35-14.
Both teams would struggle to find footing on a soggy field during much of the third quarter. K.J. Lee broke the pattern, finding the endzone on a one-yard run with just under four minutes in the third quarter for the Blue Devils to go ahead 42-14.
With Embry substituting younger players for the remainder of the contest, the final points would come on a run from Demetrius Ingram as the clock expired for the final 48-14 tally.
Water Valley will now host Kossuth in the first round of 3A playoffs. Kossuth enters the playoffs with a 5-6 season.
“I am proud of the kids, they have played hard and been rewarded with a first-round, playoff game at home,” Embry said.
“You have to go through the process, winter weights, spring practices, summer workouts before the season starts,” Embry said. The coach also attributes support from the community, booster club and school administration as part of the success.
Under Blue Devil Head Coach Brad Embry, Water Valley is 4-1 in first round playoff games, with the only loss coming in 2008 to Leland in the 2A playoffs.
The winner of the Water Valley/Kossuth first round matchup will advance to face the winner of the Louisville/Ruleville Central first round game.
“The competition is going to get tougher in the playoffs,” Embry said as the next phase of the season gets underway.
“Kossuth is very well-coached and they have a history of a good football program. They are always in the playoff, this is nothing new to them,” Embry added about Friday’s contest.
Also representing  Region 2-3A in the playoff are Charleston, Independence and North Panola.