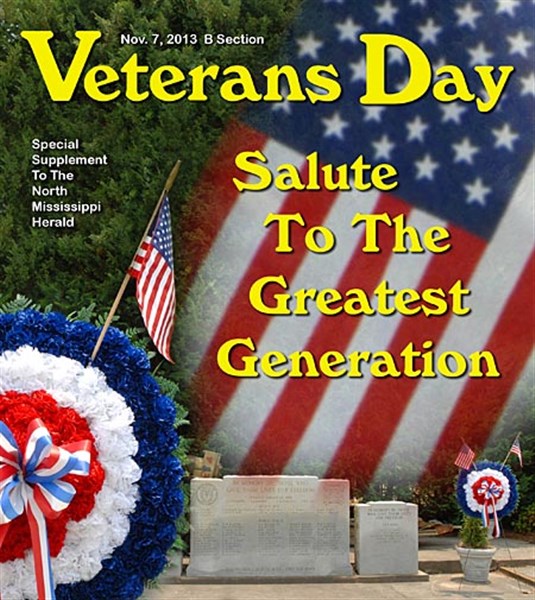 
WATER VALLEY – On Monday, Americans will honor all veterans in a ceremony that began in 1919 to recognize those who had fought in World War I.
Veterans of Foreign Wars Post 4100 will host a Veterans Day service beginning at 11 a.m. at the memorial in Railroad Park downtown. In the event of inclement weather the service will be held at the Post Home west of Water Valley on Highway 315 north, according to Commander Michael Taylor.
Our local veterans are also being honored by the community in a special section included with this edition of the Herald. Although the section features veterans of all wars, special emphasis is on those who served during World War II.
The men and women from that era have been called “the greatest generation” and Yalobusha County residents were quick to step up and serve their county.
But, in January 1941 the wars already raging in Europe and the Pacific seemed far away from Water Valley. The depression was past and consumers could purchase a new car, like the Pontiac Torpedo, for $828. Gasoline was on sale at the grand opening of the Your Friend service station for 10  cents per gallon.
A new board of aldermen was set to take office headed by reelected Mayor F. B. DeShon and influenza was causing problems for the local schools.
Herald editor Jack Dale summed up the feelings of many Americans:
“We feel quite sure that our county should step in as quickly as it can and give Great Britain all aid short of actual war. Most of us realize that in doing so, we are courting war. We have come to feel, however, that there are worse things than war – oppression of free peoples, tyranny, cruelty, dictatorship, the end of personal freedom.”
By early March, 22 Yalobusha County boys boarded a specially chartered bus bound for Camp Shelby. This was the largest group yet to be inducted from the county. One of the young men, James Stribling, who had volunteered and had been once rejected because he was a few pounds underweight, had stuffed himself on malted milks and bananas to get his weight up. He fell short by a “hair,” but vowed to try again.
Army officials had reportedly selected two new camp sites in Mississippi, one being in the Holly Springs National Forest area north of Grenada. Each would house a division of about 25,000 men.
In May, 45 seniors, the second largest class to graduate from WVHS, received their diplomas. At the end of the month President Franklin Roosevelt declared an unlimited national emergency. Kermit Cofer, president of the Carnival Association, announced that it appeared likely that the Watermelon Carnival would be discontinued.
In June, 13 more men were called by the draft board. TVA requested that the city overhaul its standby electric generating dynamos in order to produce the maximum amount of electricity possible in the event it was needed for defense production.
Mayor DeShon urged citizens to guard against the unnecessary use of electric power. On June 26 it was announced that business houses would observe new closing hours to conserve electricity.
Later in October, a shipment of clothing, hospital supplies and sweaters made by Yalobusha County women were shipped to the British Isles by the American Red Cross. At the end of November, married men were reclassified and became eligible for the draft.
Water Valley was preparing for the Christmas season at the beginning of Decem-ber. The first Saturday of the month was a busy one for local merchants. The next day, Sunday, Dec. 7, began like many others with church services.
At the same time Rev. R. L. Stewart was delivering his sermon, “I Shall Not Be Moved,” at First Christian Church, aircraft of the Imperial Japanese Fleet lifted from carriers snaking their way toward Pearl Harbor.
News of the vicious sneak attack began to reach here by early afternoon. Rayford Edgar was sitting on the bridge rails next to the McLarty store with a group of friends, a normal thing to do on a Sunday afternoon. “We talked about the incident at Pearl Harbor. We all thought that each of us would be involved – and we were.”
Lawrence Hale was at Byer’s Drug Store. He remembered wondering if it would last long enough for him to get in it.
Bruce Gurner, already in the service, recalled that he was coming out of the mess hall when someone called him over to listen to the radio in his car. “They were talking about the attack,” he said.
“There was a lot of talk about what we were going to do. There wasn’t a gun at Keesler Field. They posted guards that night with golf clubs and baseball bats.”
Herald writer Dudley Wagner was a home working on his column, “Here, There and Elsewhere,” when he heard the news. Wagner wrote:
“As you already know, many Americans lost their lives in Sunday’s bombing of Pearl Harbor and many others were injured. It was a dastardly attack by a nation supposedly trying to reach a peaceful settlement with our government over the far east situation. An unwarranted attack which reeked with the stink of Hitlerism.
But, never fear, the smell will be washed clean by the armed forces of the United States – the Navy, the Army and the Air Corps, God Bless ‘em! It may take time, but when it’s finished, Japan will know beyond the shadow of a doubt that it made its greatest mistake of the past thousand years on Dec. 7, 1941.
The United States always pays it just debts – and this is a just one. It will be paid in full.
There’s no denying we are face to face with the gravest situation in the history of our nation. What the future holds no one can foretell. This we do know: We are Americans and by the help and grace of God there will always be an America!”