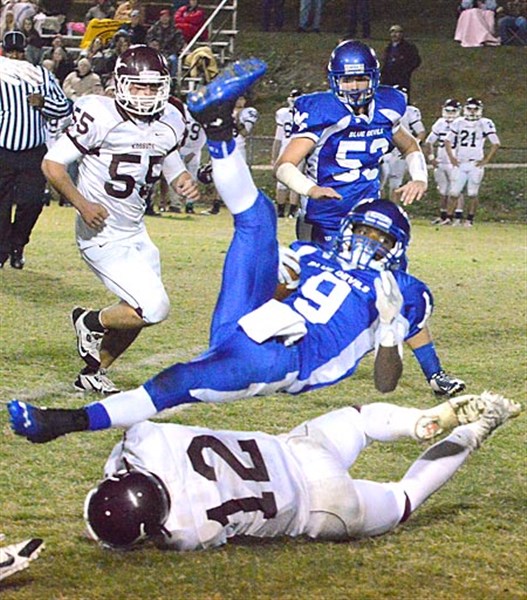 Elijah Rogers gets upended in last Friday’s win over Kossuth. Rogers led the Blue Devils’ rushing attack during the night with 68 yards and one touchdown. –Photo by Mark Anthony


WATER VALLEY–It took only two minutes for the Blue Devils to jump ahead 9-0 and set the tone for the 47-15 win over Kossuth in the first round of the playoffs.
The big win came on the heels of the tragic news that DES Principal Dr. Carol Gary and her 12-year old son had been gunned down in their Oxford home.
Players from Kossuth and Water Valley lined opposite endzones in a special pre-game ceremony to honor the victims.
“I was proud of their mental toughness with everything that had been going on,” Embry said about the win.
After a muffed kickoff the Aggies started on their three yard-line to start the opening drive as the game got underway Friday. Three plays later the punter was in the end zone and unable to get it off, giving Water Valley the safety.
After a short kick, Senior signal caller E.J. Bounds wasted no time going to the air, connecting with receiver L.J. Hawkins for a 36 yard reception. A 15-yard facemask penalty against the Aggies extended the yardage on the play, putting Water Valley on the two-yard line after one snap.
Elijah Rogers scored on the ensuing play with a two yard run, giving the Blue Devils the nine point lead.
The Aggies would be next to score, starting their drive on their 28  yard-line. After driving to Water Valley’s 27 yard-line the Blue Devil defense stopped them, forcing a field goal for the Aggies’ first points.
Not to be outdone, junior kicker Alex Robles connected for a field goal on the next drive after the Blue Devil offense drive sputtered at the nine yard line, increasing Water Valley lead to 12-3. Robles was perfect on the night with six extra point.
The Aggies went three-and-out on the next series, and the Blue Devils would take advantage of the opportunity with a 12-play, 65 yard drive capped by a 35-yard pass that T.T. Person took to the house.
The Aggies went three-and-out again, and Water Valley mounted a nine-play, 51 yard drive that culminated with a 15 yard touchdown run by Brandon Bounds to go ahead 26-3 with just over three minutes remaining in the half.
Another three-and-out for the Aggies, and B. Bounds would strike for his second touchdown of the night, coming on a four yard run with a minute remaining in the half.
The Blue Devils started the second half with the ball and another score, this time on a five play, 56-yard drive capped by B. Bounds’ third touchdown run. Water Valley’s lead increased to 40-3.
The Aggies were able to score twice late in the second half. Their first touchdown came on a 14-play drive that ended with 9:40 in the game.
The Blue Devils would only take four plays to respond, driving 41 yards in four plays including a 17-yard touchdown pass to L.J. Hawkins for the home team’s final score of the game.
The Aggies’s second score came with just over a minute remaining in the game, grinding out yards against younger players brought in by Embry.
The Blue Devils pounded out 192 yards in their rushing attack during the night led by Rogers, who recorded 68 yards in five carries. B. Bounds recorded 51 yards in nine carries. His older brother, E.J. Bounds registered 46 yards in 11 carries. The quarterback also completed nine receptions during the contest for 151 yards including the two touchdown passes.
L.J. Hawkins recorded 76 yards with three catches, including a 43 yard catch. Rogers had two receptions for 20 yards, Trey Alexander had two receptions for 16 yards and James Washington had one reception for four yards.
With the win, the Blue now face the state’s top ranked 3A football team in the second round of playoffs.
Embry sees the contest as a great opportunity for the Blue Devils.
“It’s not every day you get to play the number one team in the state,” Embry told the Herald.
Embry said it will be important for his defense to wrap up and make good tackles against the Wildcats to to help eliminate the big plays.
“Offensively they are dynamic, a missed tackle can easily be an 80 yard run,” Embry said.
The Wildcats enter the contest undefeated through 12 games this season–or one more win that the Blue Devils. Their defense has only given up 54 points all season.
The winner of Friday’s game will take on the winner of the North Panola /Cleveland Eastside game.