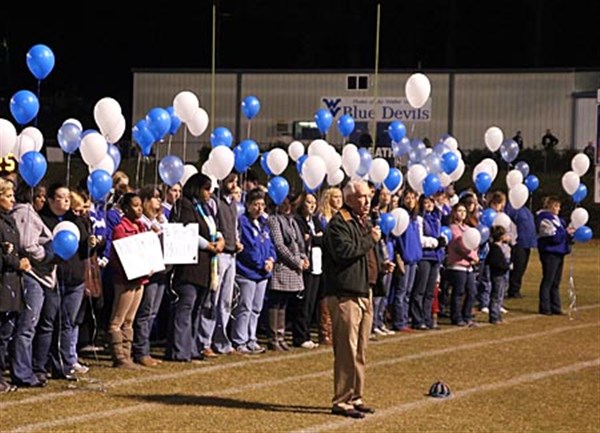 In an emotional ceremony Friday night, Superintendent Kim Chrestman highlights the impact Dr. Carol Gary had at Davidson Elementary School. Blue and white balloons were released in her honor (photo below). – Photos by Claudia Anthony 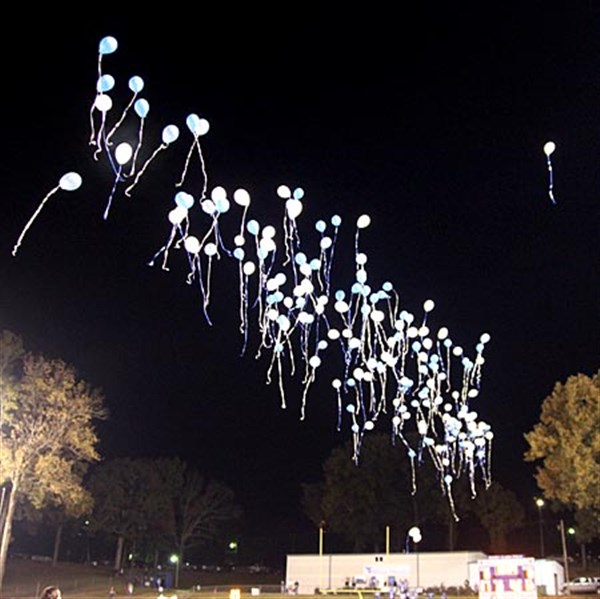 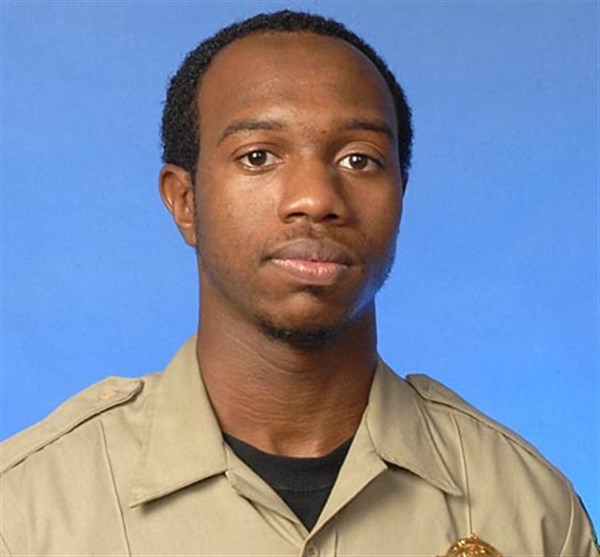 
OXFORD–Funeral services are scheduled Saturday at 11 a.m. at the Water Valley Civic Center for Davidson Elementary School (DES) Principal Dr. Carol Gary, 43, and her 12-year old son, Patrick Earl Gary.
They were discovered fatally shot inside their home in South Oaks subdivision in Oxford last Friday around 5:45 a.m. Gary’s older son, Regis Mister, 25, was charged with two counts of murder. Mister is a former deputy sheriff for Yalobusha County sheriff’s department.
In the hours after the shooting Oxford Police Chief Joey East reported a family member was in custody as a person of interest in the case. In a press conference at 6 p.m. Friday afternoon, East identified Mister as the family member. He also reported that Mister had been formally charged with two counts of murder.
While authorities were working the crime scene in Oxford, school officials in Water Valley were comforting parents, teachers and students at DES and the high school as news of the tragedy spread across the community.
Sheriff Lance Humphreys said law enforcement officers were at the school to help squelch concerns about the safety of students.
“I dropped my kids off and then stayed for much of the morning. A tragedy of this magnitude prompts both questions and fear in the community,” Hum-phreys reported.
By nightfall Friday, a special ceremony honoring the victims was held on the football field prior to kickoff.
Players from Kossuth and Water Valley lined opposite end zones as Superintendent Kim Chrestman spoke about the difficult day, the impact on the students and the outpouring of support from both the community and the faculty and students at school.
Chrestman also praised the faith, love and professionalism Dr. Gary had brought to DES.
“She was a woman of faith and character,” Chrestman said. “She loved children and serving children,” he told the crowd. Chrestman also said the tragedy had a strong impact on the students in the district, both at the high school and elementary school.
“I would like to compliment our students’ behavior. I can’t say enough about the atmosphere at the schools today,” Chrestman added, before closing the ceremony with prayer and the release of white and blue balloons.

About the Suspect
Mister was living at his family’s home at the time of the crime. He had worked as a School Resource Officer (SRO) at the Water Valley School District for two years– a job he held from October, 2011, through May, 2013.
He came under scrutiny in May for alleged misuse of the county’s Fuelman credit card and was placed on administrative leave without pay, according to Humphreys. The matter was turned over to the state audit department and Mister was terminated from the county in August.
Humphreys said his department received a call around 1 a.m. Friday morning from a repo company starting they were preparing to pick up Mister’s vehicle.
“This obviously came as a total shock to our entire department,” Humphreys told the Herald. “Regis was a good deputy.”
The sheriff’s sentiment was also shared by officials at the school where he had patrolled. Superintendent Kim Chrestman said Mister was very organized and displayed many qualities as his mother.

About the Victims
Gary graduated from Coffeeville High School in 1987 and earned degrees in education from the University of Mississippi and Mississippi State University.
She had worked at DES for a dozen years as a teacher and assistant principal until 2009, when she left to become principal at South Panola Elementary School, according to Chrestman. She returned to Davidson in 2012 as a curriculum coordinator before taking over as principal this year.
Patrick Gary was a student at Oxford Middle School. He would have turned 13 Monday.