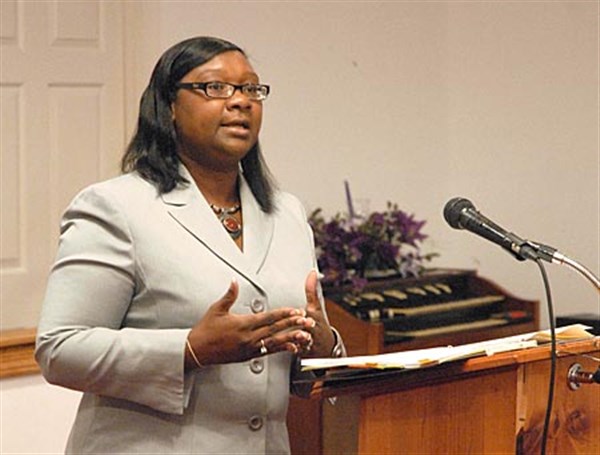 Dr. Carol Gary spoke at an educational forum last year and said, ““We can’t fail the children by saying ‘Oh, they are poor and pitiful. No longer can we use that as an excuse.”


WATER VALLEY – Dr. Carol Gary was passionate about educating children and her enthusiasm was contagious among the teachers who worked for her.
Gary, in her first year as principal of Davidson Elementary School, was fatally shot last Friday along with her 12-year-old son at their Oxford home.
One of the ways that her contagious enthusiasm showed was in how she got her staff to spend almost as much of their personal time as she did providing after-hours opportunities for learning.
One of the programs of which she was particularly proud was the family study night held recently at DES. Gary told the Herald that she was very pleased that about 80 parents showed for the weeknight session, aimed at teaching parents how to help their children perform better academically.
Getting 80 parents to participate out of the 695-student school might not seem like a lot, but it demonstrated Gary’s never-give-up attitude when it came to her students. Just a year ago, Gary worked with Superintendent Kim Chrestman on an educational forum with almost no participation after sending over 700 invitations to parents.
Gary, who at the time was director of curriculum and alternative education for the school district, opened the meeting by saying,“If there are two or three parents who are here, that’s two or three parents who will get the information to share within your communities and within your families and within your churches.”
“We sent home about 700 notices and so if we get one percent, we get one percent,” she added. “That’s one percent of our population who will have the information to go back out and share.”
Although the audience was small, Gary told those gathered that they were at the meeting to learn how to prepare their student for the Common Core state assessments that are just around the corner.
After giving six adults a sample text with Common Core questions aimed at first through third grade students and having them miss several of the questions, she said, “This is what our children are up against. As parents, as stakeholders, as educators, we are charged with making sure that these students meet these standards.”
Gary explained that the Common Core is simply a set of standards that will allow all children to compete globally. “To do that they are going to have to become problem solvers. They are going to have to learn how to manage themselves. And, they are going to have to learn how to think.”
Gary urged parents to take time with their children every day. “Talk to them…communicate. One of the requirements is for our students to communicate and work in teams.”
“As parents we play a huge roll in what our children are able to master,” she said. “We have to get our children ready the moment they come into the world. They are ours. God has charged us with them. We are responsible for them and it is our duty and our responsibility to prepare these children for the future.”
“We can’t fail the children by saying ‘Oh, they are poor and pitiful,’” she said. “No longer can we use that as an excuse.”