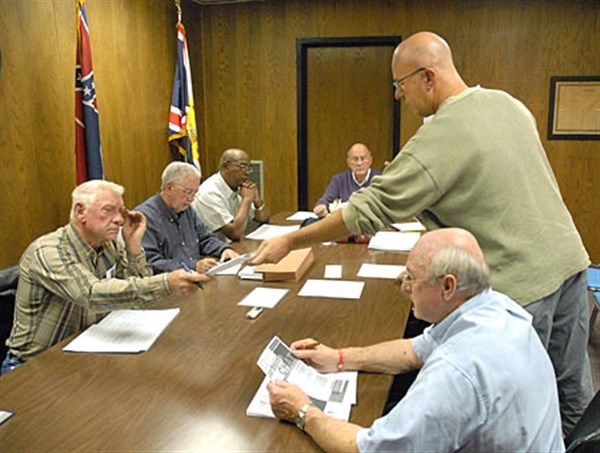 Water Valley Main Street Director Mickey Howley handed out invitations to aldermen to attend the Thursday, Nov. 14, session with Charles Marohn of Strong Towns. Marohn’s visit will be from 10 until 11:30 a.m. at the Main Street office and is sponsored by the Appalachian Regional Council and the Stennis Center at Mississippi State University.


WATER VALLEY – City utility customers will be able to monitor their use of electricity and water online in the not too distant future after aldermen approved a hosting agreement with Mueller Systems.
But, in the meantime, the company will begin to collect data from the city’s water and electric “smart” meters to produce management reports and transmit data for billing purposes, Mayor Larry Hart said at the first Tuesday city board meeting Nov. 5.
Installation of the smart meters began just over two years ago and will continue until all the electric and water meters are replaced. “It’s going a little bit slower in the water department because it is a pretty good task to change out a water meter,” the mayor explained.
The system also saves money for the utility departments by providing readings directly to the business office, according to Mayor Hart. No longer will a meter-reader be required to go house to house and utility service can be turned on and off from the office. The system will also report power outages and pinpoint their location.
“Ultimately the customer – our rate payer – will be able to go online from their home or office or wherever during the month and be able to assess where they are with their usage,” he added.
The cost of the service, which includes hosting, reports, software, maintenance and updates, is $8,600 per year and will be divided between the two departments.
“It’s going to ultimately save us money,” Mayor Hart told aldermen. “I think it’s going to be considerable savings.”
Among other actions at the Nov. 5, aldermen:
• Heard a report from Water Valley Main Street Director Mickey Howley, who told aldermen that on Thursday, Nov. 14, Charles Marohn of Strong Towns will be in the city.
Marohn’s visit will be from 10 until 11:30 a.m. at the Main Street office and is sponsored by the Appalachian Regional Council and the Stennis Center at Mississippi State University.
Howley invited the mayor and alderman to attend as well as citizens interested in Water Valley’s future.
• Granted ad valorem tax exemptions for BorgWarner including the freeport warehouse exemption for $515,132 and another for last year’s $23,599,300 expansion.
• Updated and approved the city’s fair housing resolution and the section 504 plan.
• Approved advertising for the city’s depository and culvert purchases for 2014.
• Heard from City Clerk Vivian Snider that the city offices will be closed for the Thanksgiving holidays on Nov. 28 and 29.