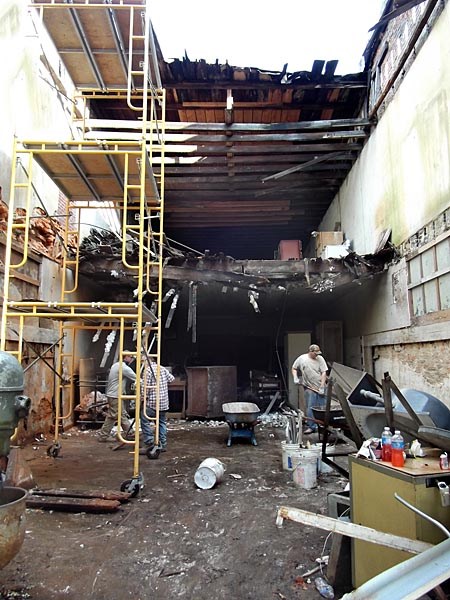 After purchasing the old Blu-Buck buildings last week, Kagan Coughlin immediately began the first phase of the renovation, cleaning up. The building on the north end was most deteriorated after half of the roof collapsed several years ago. Coughlin plans to repair the walls and have an open courtyard in the front portion of this building. The courtyard will have a second floor, L-shaped porch accessing four apartments, two in the building above and two more in the adjacent building that will al


WATER VALLEY–A plan to renovate four Main Street buildings to provide  both retail and residential rental space was quickly approved during a planning commission meeting Monday night.
Property owner Kagan Coughlin provided commissioners with an overview of the project, which will convert the space into eight apartments and four commercial retail spaces.             Coughlin’s main purpose at the meeting was to request a variance for two of the apartments to have ground floor rooms.
Commissioners approved the variance, which was needed because the city ordinance currently limits apartments to the upper floors of Main Street buildings in the Central Business District.
The variance allows two of the apartments to have downstairs rooms. Both apartments will be located in the back of the buildings and face east, according to Coughlin.
His request comes less than a week after he purchased the old Blu-Buck buildings from the estate of Bobby Surratt. The renovation started immediately and is expected to take a year, according to Coughlin.
Coughlin also said the row of buildings will be named Blu-Buck Mercan-tile, in keeping with the original name that stemmed from store operators Bluford McCullar and Buck Surratt.
All four retail spaces will be located downstairs, one in each of the buildings.
“I am excited about the prospect of this happening. I think that it is wonderful that we are going to have that in this little town,” Ken French said, a sentiment that was shared by all four commissioners attending. Lavert Hawkins was not at the meeting.
“We already know he can true up a wall at the B.T.C.,” Commissioner Eddie Foster added, referring to Coughlin’s first project in Water Valley, renovating the old Parker building, which was turned into a  linchpin Main Street business by Coughlin’s wife, Alexe van Beuren.
Coughlin also said the completed plans for the northern most building with the collapsed roof will have a 45-50 foot open courtyard that includes the original entrance and walls.
“The original brick walls will be repaired and reinforced. When you walk through that entry-way you will have an open-sky courtyard. The storefront will begin 45-50 back,” Coughlin explained.
The open space will allow a wrap-around, L-shaped second-floor deck that will access four of the smaller apartments geared toward weekly rentals.
“The target audience for that are the executives and visiting people at BorgWarner and Cayce Washington’s plant,” Coughlin said. “My focus has been getting the people that come to Water Valley (to work short-term) to stay and eat dinner,” he added.
The four remaining apartments include the pair of two-story apartments  facing east and two more second floor apartments, also facing east. All four of the apartments will open into green space and parking Coughlin will create behind the buildings.
The space behind the building will be open and gardens, “a pretty space,” Coughlin explained.
Coughlin also said he will try to salvage the old warehouse that parallels Railroad Street on the backside of the acreage.
Coughlin said a structural engineer offered input on how to shore up the back wall of the warehouse, which juts out over a ditch.

Final Comments
“We haven’t seen anything like this since I have been here, and I have been here 33 years,” French said.
“We appreciate you, don’t hesitate to call on us in the future if you need us,” Commissioner Lynn Morris added.
“Everyone has been great. The (Mechanics) bank has been great,” Coughlin said.