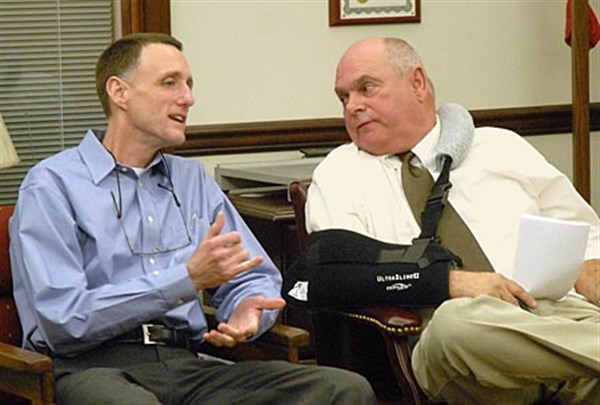 Glenn Kitchens (left) will shift from principal at Water Valley High School to Davidson Elementary School for the remainder of the 2013-14 school year. William Cotton of Houlka (right), a retired educator with four decades of experience, will served as interim principal at the high school. The appointments were made at Monday’s school board meeting following the tragic death of DES principal Dr. Carol Gary. – Photo by Jack Gurner 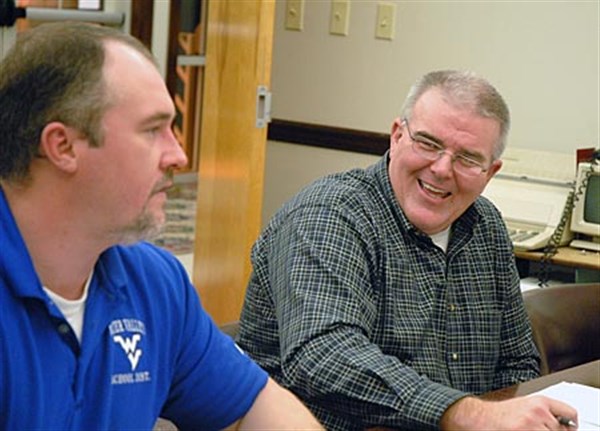 Monday night’s school board meeting marked the first for Bryan Gilley (right), who was appointed to fill the unexpired term of Chris Terry. Terry resigned the post after moving out of his district. – Photo by Jack Gurner


WATER VALLEY – High School Principal Dr. Glenn Kitchens will take over as interim principal of Davidson Elementary School, filling the vacancy left by the tragic death of Dr. Carol Gary.
Retired educator William Cotton of Houlka, a veteran of 40 years in Mississippi schools, will take over as interim principal at WVHS.
Superintendent Kim Chrestman made the announcement to DES faculty and staff late Monday afternoon at the same time Dr. Kitchens told his staff.
Chrestman said the appointments are temporary and would only be until the end of this school year. “The idea is not to replace Dr. Kitchens at the high school, it’s just to allow Dr. Kitchens to work through Mr. Cotton to continue on the current path and at the same time try to keep the elementary school on the path set up by Dr. Gary.”
Dr. Kitchens just completed ten years as WVHS principal. But, Chrestman emphasized that his background is in elementary education. “That was one of his first jobs as a principal.”
“One of the concerns at the elementary under these extraordinary circumstances is to put someone in there with whom they are familiar, someone that they could work with and who would understand their circumstances,” the superintendent added. “To bring someone totally new in at this time might not be the best thing for this crisis that we are in.”
Chrestman quoted Dr. Kitchens as saying; “I will do whatever I can happily for the good of the district and for the kids.”
New WVHS principal Cotton was present for the November meeting of the school board Monday night and told the Herald that he understood that he was coming to Water Valley schools in the aftermath of a terrible situation. “God has given me a special set of skills that have prepared me to do the job that needs to be done,” he said.
Cotton attended Missis-sippi State University from 1970-1973 and graduated with a degree in physical education with a minor in science. He received a Masters Degree in secondary school curriculum in 1978 and certification in educational leadership in 1983.
His first position was as assistant principal, athletic director and head football coach at Maben High School from 1973 until 1984.
From that time until his retirement in 2002 he has served as principal at Houlka Attendance Center, Houlka; Bryam High School, Jackson; Riverside High School, Avon; Chastain Middle School, Jackson; T. L. Weston High School, Greenville; St. Joseph Catholic School, Greenville, junior high principal; and Carroll Academy, Carrollton, headmaster.
After retirement he filled in as guidance counselor for the second semester at East Webster High School. He went back to work as principal of Houlka Attendance Center from 2003 until 2009 and then became headmaster of Hebron Christian School in Pheba from 2009 until 2013.
Cotton also has a long list of professional training and recognitions including Star Teacher for five years at Maben High School and Star Teacher for Mississippi District IV in 1978.
He was featured by Progressive Farmer magazine as having the ideal rural school in 1989.
Cotton is a newlywed, having married Margo Terry-Cotton just three months ago. The couple has two children each by previous marriages.
During executive session at the end of the school board meeting Monday, trustees discussed the situation before voting to accept the superintendent’s recommendations. The major concern, according to Chrest-man, is that the principal appointments will cause disruption at both campuses. “Actually, I think we can have stability at both campuses,” he said.
“My intention is for Dr. Kitchens to handle graduation and to monitor things through Mr. Cotton. I am not asking Mr. Cotton to replace Glenn Kitchens and I am not asking Glenn Kitchens to replace Carol Gary.
Cotton will be working through a transitional period with Dr. Kitchens this week and the two principals will be at their new posts after the Thanksgiving holidays.