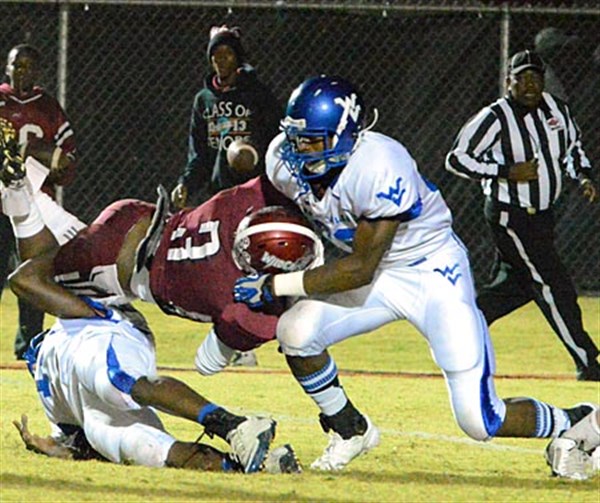 Kirkland Horton and Dee McNeal penetrate the backfield to make a tackle for a loss. – Photo by Mark Anthony


LOUISVILLE–The Blue Devil’s season came to an end last Friday in the second round of playoff with a 56-27 loss against the top ranked Louisville Wildcats.
The Wildcats took an early lead in the contest with a 50-yard run on their opening possession, but the Blue Devils (11-2) marched the ball 68 yards down the field in an eight-play drive capped by a touchdown pass to T.T. Person to score on their first possession in the game.
Thanks to a fumble recovery by L.J. Hawkins on the ensuing kickoff, the Blue Devils then took a 13-7 lead in the game, marking the first time the Wildcats (13-0) had faced a deficient all season.
“We did exactly what we needed to do to have a chance. We just could not match punches with them during the night,” Coach Brad Embry said of his team’s effort.
By halftime, the Blue Devils were down three touchdowns as the senior-laden Wildcats continued to rotate fresh players in the contest.
“Louisville is one of the better 3A teams I have seen,. both in depth and athletic ability,” Embry said. “They aren’t good football players, they are great football players,” Embry added. “But that doesn’t diminish what our kids did this season.”
The Blue Devils put up two more touchdowns during the night with a 10-yard pass to Derrick Brady and a 10-yard pass to Person late in the fourth quarter.
Senior quarterback E.J. Bounds finished the night completing 12 of 35 passes for 131 yards including the three touchdown receptions.
The Blue Devils’ four touchdowns against Louisville marked half of the points scored against the 13-0 team during the entire season.
The 2013 Blue Devil team finished the season with 40 points per game output average, the most in school history. The team put up 521 points surpassing last year’s team that recorded 486 points.
“All of those things are good, but I am proudest of the 16 seniors and the example they are in the school and community. Eleven wins is a good season,” Embry said.
Embry also praised the group for stepping up after last year’s team had 15 seniors graduate, including seven who signed National Letters of Intent to play college football.
Now with 16 players graduating this year, it’s time to repeat the process.
“Just like last year, we will be looking for players to come out and work hard in spring practice to fill these spots for next year,” Embry said.

Playoffs Continue
The only other loss the Blue Devils recorded this year was against Charle-ston, who remains in the playoffs after a 56-41 come-from-behind win over Aberdeen last Friday.
Charleston will face North Pontotoc Friday night, while Louisville will play Cleveland East Side. The winners of those two games will face off on Nov. 29 for the north half.