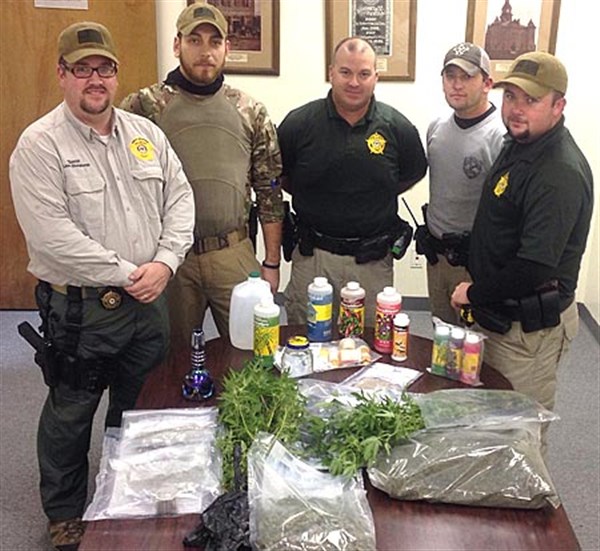 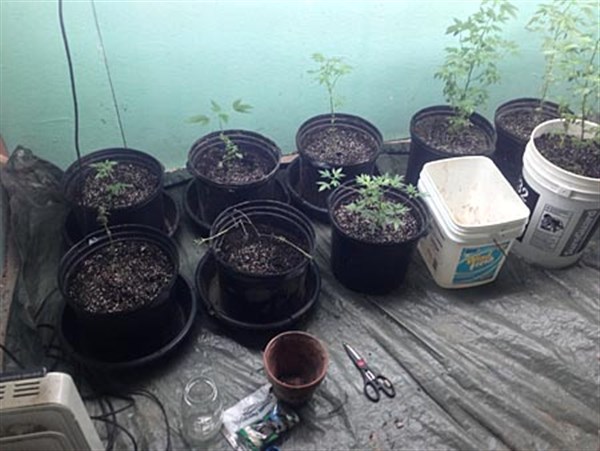 The marijuana plants seized ranged in size from a foot tall to several feet. Authorities believe the young plants were going to be moved to a separate grow house to reach maturity.


COFFEEVILLE– A Coffeeville man was arrested Saturday night after authorities discovered an indoor pot growing operation inside his residence.
James Earl Sapp, 38, was charged with manufacturing drugs and possession of a firearm by a convicted felon, according to Sheriff Lance Humphreys.
Ten lawmen including the sheriff,  constables Randy Simmons and Brent Anderson and deputies executed a search warrant at Sapp’s home, located northeast of Coffeeville on County Road 84 Saturday night. Sapp was taken into custody without incident. Ten guns and 17 marijuana plants were seized, along with a small amount of hash and an estimated five pounds of marijuana.
A family member was also at the residence during the raid, but was not charged.
“We were able to obtain a search warrant after an informant tipped us about the operation,” Humphreys told the Herald. The seizure marked the first commercial indoor pot operation the sheriff has seen in the county.
“It’s not unusual to find a couple of indoor plants, but this has all the makings of a commercial operation,” Humphreys explained.
Humphreys said a room inside Sapp’s residence had been painted green and growing lights were overhead the plants, which were in the early stages of growth.
“He had a 20×10 grow house behind his house where the plants were going to be relocated to reach maturity,” Hum-phreys added. The grow house did not have a floor and the dirt had been freshly tilled, according to the sheriff. Plumbing had also been installed to give the plants water. Chemicals to assist in the growth were also seized inside the home.
“He told one of the deputies he had six varieties,” Humphreys added.
Sapp also had the makings of a whiskey still in a nearby creek along with several pints of moonshine inside his residence.
“I asked him if he had been watching the History Channel,” Humphreys said. “He said he had, but his whiskey didn’t taste very good.”
Sapp was not charged for the still. He remains in custody at the Yalobusha County jail after Judge Steve Riley set a $500,000 bond for the drug manufacturing charge and $5,000 for the weapons charge during an initial appearance Monday afternoon.
Humphreys said the manufacturing charge carries a 30 year maximum sentence and up to a $1 million fine in Mississippi.