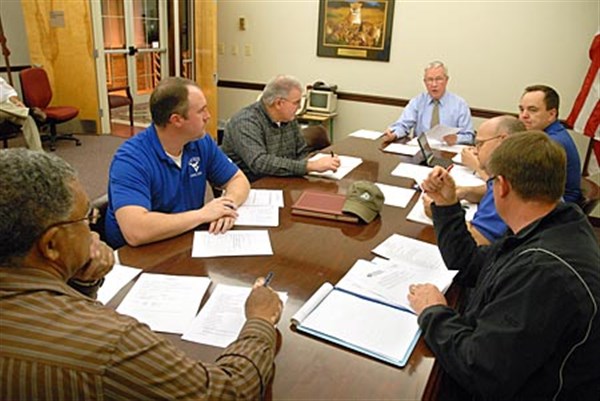 Brian Gilley (near center) attended his first meeting after being appointed to fill the unexpired term of Chris Terry, who resigned because he is moving from the district.


WATER VALLEY – Students in Kindergarten through 8th grade will have more choice in what they eat for lunch after the school board approved the food service procurement plan for the school year.
District Superintendent Kim Chrestman explained that students would be able to pick from five items offered daily in the lunchroom. “They don’t have to get all five. They can pick at least three. That way we don’t waste nearly as much,” he said.
High school students already have a choice of items, Chrestman added.
Among other actions at the Nov. 18 regular monthly meeting, trustees:
• Approved Title VI assurances.
• Approved Renaissance Learning, Inc as a sole source vendor.
• Granted permission for two out-of-state field trips; one to the Orpheum Theater and the other to the Pink Palace Museum.
• Disposed of two non-functioning copy machines.
• Paid claims including $1,710.65 to Southern Pipe for a stainless steel urinal for the junior high. “Is it gold plated,” asked Trustee Pierce Epes after hearing the price.
Another item that caused comment among the board members was a $968 payment to Tri-Star Mechanical Contractors of Batesville for work on the boiler at DES, a source of continuing problems.
• Heard a financial report from District Business Manager Randy Goodwin who said that the fund balance in the district maintenance fund was $1,635,729.16.
At the end of Goodwin’s presentation, Board President Lamar Burgess asked if there were any questions about the financial report. “I got a bunch, but I’ll ask them later,” said Brian Gilley, which drew a laugh from the other board members.
Gilley was attending his first meeting after being appointed to fill the unexpired term of Chris Terry, who resigned because he is moving from the district.
• Heard the Superintendent’s report, which included comments from Chrestman on the way the community came together to honor Dr. Carol Gary.
Near the end of the meeting, Trustee Casey Washington praised the teachers and staff for the way they handled the confusion surrounding the death of Dr. Gary. “There was a calm; there was a professionalism that I can’t even begin to describe,” he said.
Washington said there was a lot of concern in the community including the rumor that the school was under lockdown. “People were checking their children out,” he continued. “That went without a hitch.”
“It just reaffirmed why I love Water Valley and Water Valley School District,”
Board President Burgess added that he was amazed at how quickly local pastors showed up at the school. “They walked and talked with the staff. I think that added a calming effect.”
“It was a sad day. Not just for Davidson, but for the whole community,” he said. “Right now we have a big challenge ahead to rise to those expectations she left behind. So, the job isn’t over.”