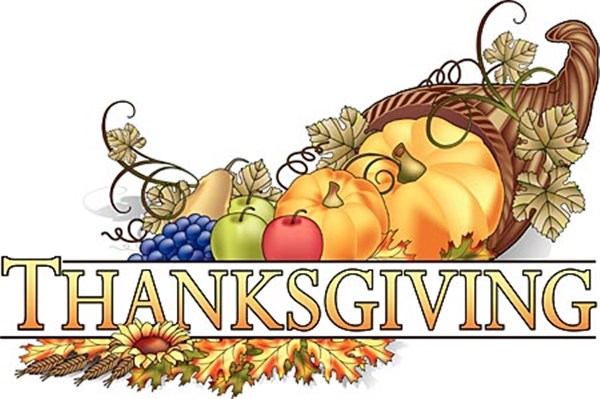 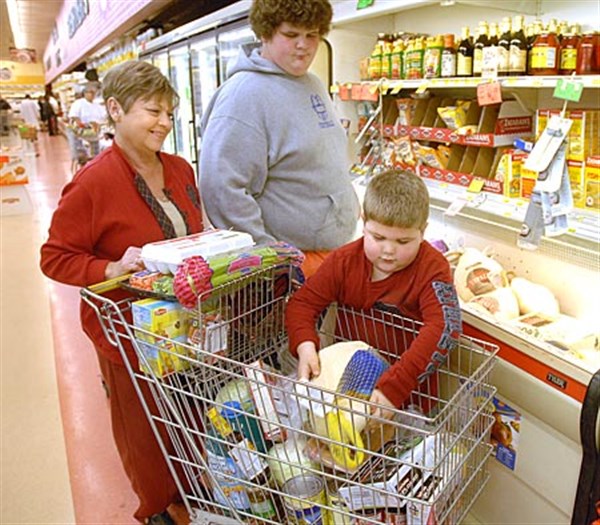 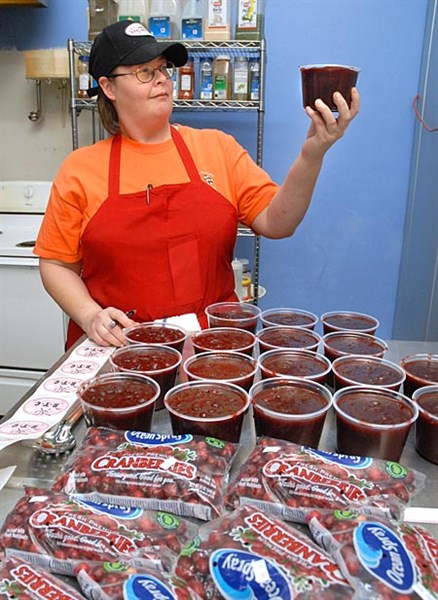 Dixie Grimes, head chef at the BTC Old-Fashioned Grocery, examines a freshly made batch of her homemade cranberry sauce.


WATER VALLEY – The classic Thanksgiving Day feast will cost just a little less this year, according to the 28th annual informal price survey conducted by the American Farm Bureau Federation.
On the local level, the price is even a little lower than the national average, according to the Herald’s very informal survey conducted by the newspaper’s resident tightwad.
The national survey indicates the average cost of this year’s feast for 10 is $49.04, a 44-cent price decrease from last year’s average of $49.48.
“The cost of this year’s meal, at less than $5 per serving, remains an excellent value for consumers,” said AFBF President Bob Stallman, a rice and cattle producer from Texas. “America’s farm and ranch families are honored to produce the food from our nation’s land for family Thanksgiving celebrations,” he said.
The AFBF survey shopping list includes turkey, bread stuffing, sweet potatoes, rolls with butter, peas, cranberries, a relish tray of carrots and celery, pumpkin pie with whipped cream, and beverages of coffee and milk, all in quantities sufficient to serve a family of 10. There is also plenty for leftovers.
The big ticket item – a 16-pound turkey – came in at $21.76 on the national level. That is roughly $1.36 per pound, a decrease of about 3 cents per pound, or a total of 47 cents per whole turkey, compared to 2012. Locally, the prices runs as low as $14.08 ($.88 per pound), the same as last year.
However, even a more expensive turkey breast is only $1.58 per pound locally and a top-of-the-turkey-line smoked bird is only $2.48 per pound. The Herald wasn’t able to locate a do-it-yourself kit (live turkey and small hatchet) locally.
In addition to the turkey, other items that declined in price included a dozen brown-n-serve rolls, $2.18 ($1.98 locally); one pound of green peas, $1.54 ($1 locally); fresh cranberries, $2.42 ($1.98 locally); and two nine-inch pie shells, $2.49 ($2.28 locally).
One of the items that always gives us a problem is trying to compare fine local cornbread dressing with the “bread stuffing” on the list. A close equivalent is $2.36. And, we don’t even like to mention oyster dressing.
“Most Americans will pay about the same as last year at the grocery store for a turkey and all the trimmings,” said John Anderson, AFBF’s deputy chief economist. “Slightly higher turkey production for much of the year coupled with an increase in birds in cold storage may be responsible for the moderate price decrease our shoppers reported,” he said.
“Special sales and promotions on turkey and other holiday food items will continue right up to Thanksgiving,” Anderson explained. “If you have the patience to wait until the last minute to buy a turkey you might come home with an exceptional bargain,” he said.
The average cost of the dinner has remained around $49 since 2011. Further, Anderson noted that despite retail price increases during the last year or so, American consumers have enjoyed relatively stable food costs in general over the years, particularly when adjusted for inflation.
Farm Bureau volunteer shoppers are asked to look for the best possible prices, without taking advantage of special promotional coupons or purchase deals, such as spending $50 and receiving a free turkey. Shoppers with an eye for bargains in all areas of the country should be able to purchase individual menu items at prices comparable to the Farm Bureau survey averages.
Another option for busy families without a lot of time to cook is ready-to-eat Thanksgiving meals for up to 10 people, with all the trimmings, which are available at many supermarkets and take-out restaurants for around $50 to $75. Locally, a prepared meal will run from $40 to $50.
The AFBF survey was first conducted in 1986. While Farm Bureau does not make any scientific claims about the data, it is an informal gauge of price trends around the nation. The Herald’s survey was about as unscientific as one could get and was not the least influenced by a free sample taste at one local store.