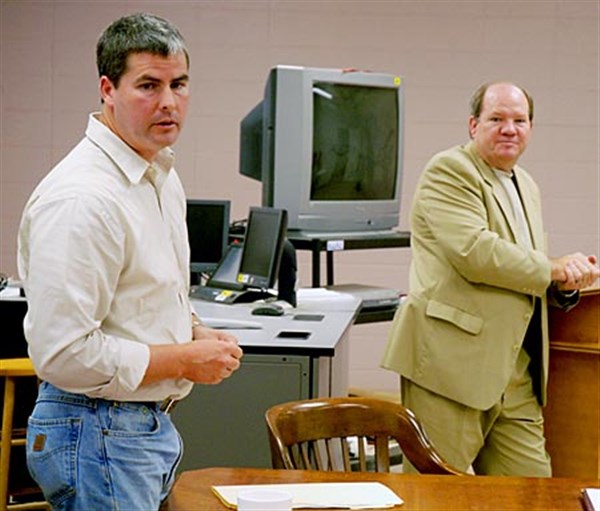 Although Lee McMinn ran unsuccessfully as a candidate for District 3 Supervisor in 2007, his campaign pushed county-wide economic development to the forefront. Just before the 2007 election the Yalobusha Economic Development Foundation hosted a meeting in Coffeeville with McMinn as moderator. A consensus was reached at that meeting for the county to fund a county-wide district with representation from each municipality. McMinn was defeated by incumbent Butch Surrette in the 2007 election, but wa


WATER VALLEY–Money from the long-dormant Yalobusha Economic Development Foundation’s (YEDF) bank account has been transferred to the Water Valley Chamber of Commerce and will be used to fund a new organization, the Water Valley Regional Industrial Foundation.
Water Valley Chamber President Tyler Hill and Chamber board member Daniel Martin explained that approximately $50,000 was transferred to the Chamber back in July. Hill and Martin said a new, three-person board will oversee the money earmarked to create jobs and assist industry.
However the news of the new organization met opposition from multiple supervisors during the “first Monday” supervisor meeting in Water Valley. The concern voiced at Monday’s meeting from three supervisors was that  the new foundation could undermine the existing, county-wide Yalo-busha County Economic Development and Tourism District headed by Bob Tyler.
A fourth supervisor, Lee McMinn, who was a member of the YEDF, also reminded meeting attendees that getting the entire county working together on economic development had been a difficult task in the past and apparently remains a sticky issue.
The discussion started when Hill requested an appointment to the new board from the county. Hill explained that the Chamber and Water Valley aldermen would also make an appointment to the three-person board.
Martin explained the purpose of a small board–to keep it simple–following Hill’s opening comments.
Board President Tommy Vaughn was first to question the transfer.
“Where did that $50,000 come from?” Vaughn asked.
“A local contribution from another foundation,” Martin answered.
“When did that happen?” Vaughn asked. “The Board of Supervisors didn’t know a thing in the world about this transfer.”
Martin explained that the Chamber had initiated the dialogue, requesting the contribution from the YEDF six months earlier.
Vaughn then quizzed Martin on the actual name of the foundation, Water Valley Regional Industrial Foundation.
“That’s two different definitions. Water Valley is a town, is it going to the rest of the county or just for Water Valley,” Vaughn said.
“If there is a factory that is going to be opened somewhere in the middle of the county… and provide 30 jobs, obviously some of those jobs will come from our Water Valley region, and so it wouldn’t be out of the realm of possibility for us to donate funds for a factory going to Coffeeville or Oakland,” Martin answered.
“Why are we bypassing what we already have. With Bob Tyler and the group we got right now that we are paying $30,000 a year–that is doing a wonderful job,” Vaughn  asked, as Martin was answering the earlier question.
Martin recommended making Tyler the county appointee for the new board.
“He is already our director. We don’t need another one. As far as I am concerned, don’t want to vote on something I didn’t know was happening,” Vaughn answered.

Tracing The History Of YEDF
District 5 Supervisor Frank “Bubba” Tillman then turned to District Three Supervisor Lee McMinn for background information. McMinn, who was a founding member of the Yalobusha Economic, provided a brief description.
McMinn explained that the foundation, which was part of the Chamber, split off over a decade ago to form a county-wide economic development foundation.
“At the time there was no Bob Tyler,” McMinn added.  But the lack of county-wide support plagued the foundation, which ultimately folded.
“That money has been sitting idle all this time, up until five months ago,” McMinn added.
“You go back to the origination of the money. It came from the county, but it was given to the City of Water Valley, which in turn gave it to the Chamber of Commerce to use as they saw fit,” McMinn explained. “There has been lots and lots of discussion about the origination of the money and who could use it. For a number of years it sat idle in a non-working capacity for the Yalobusha Economic Development Foundation. That’s the short version,” McMinn said.

More Input
“We’re all aware of that, Vaughn answered. “We just weren’t aware that y’all had transferred it and how you transferred it. To be honest with you, that’s not the way you operate, behind peoples’ backs,” Vaughn said.
“The Water Valley Chamber of Commerce has open meetings,” Martin countered.
“Well the other foundation had already disintegrated, they had no legal right to do anything,” Vaughn said.
“I think we are off point,” Martin then said.
“If you wanted to do what was right, you would split that money into three parts. You would give the chamber a third, Water Valley a third and Bob Tyler’s group a third,” Vaughn said. “That little dab of money almost cost us from having an economic development foundation. A lot of us around here, even Lee, worked hard to get this county-wide economic development. We don’t want to have to start having to compete with cities. Put the money in one pile and all work together. Bob works from daylight to dark for Water Valley, Tillatoba, Coffeeville, Oakland… Part of that money came from them (Coffeeville and Oakland) and they are not being represented in any shape, form or fashion,” Vaughn said.
“Since Bob is our county-wide director, if we work with him (Bob), we can still represent our whole entity,” District 1 Supervisor Amos Sims said. He also expressed concern about diluting the county-wide effort.
“I am concerned about it. If we get a branch here, a branch here, and a branch there,” Sims said. “I just don’t personally like that, I like us working together as a whole here,” Sims added.
“Bob does not show partiality for anybody. He works for the whole county,” Vaughn added. “To see these tax dollars going the other way, I have a hard time with it because these folks on the west side of the county are not represented by any of their tax dollars.”
Martin then countered, explaining the money had been dormant for years.
“These tax dollars went to Water Valley about 10 years ago and then lay dormant for about four or five years. We are just trying to get the money back into play,” Martin explained. “So that decision was made a long time before today, we are just trying to get the money back into play,” Martin said.
Also Martin added he understood the Board of Supervisor’s emphasis on a county-wide economic development approach and applauded it.
“Coming from the Board of Supervisors, that’s what you want to hear,” Martin explained.
But, Martin added that his organization represents Water Valley, a town he described as increasingly more involved and productive, also worthy of applause.
“We are going to ask that y’all think about this for a month. Think about somebody to appoint to the board… If y’all decide in your best judgement to not be a part of this, we would still appreciate your input whenever you feel it is necessary,” Martin added.
Hill said the money could be used to assist with a need for Tyler’s organization.    “It’s all about job creation and increasing commerce,” Hill added.
Tillman was the last supervisor to weigh in on the matter.
“Why don’t your group and Mr. Bob’s group get together and talk this out,” Tillman said, adding that Tyler had been successful in working through problems in past.
“I kind of feel like y’all have been kicking him to the side a little and I don’t want that,” Tillman added.
“That’s why we are here today,” Martin said.
Tillman then requested that both entities, the Yalobusha County Economic Development and Tourism District and the chamber work to resolve the matter.

Final Thoughts From McMinn
Discussion about the matter then came to a close with final comments from McMinn.
He traced his involvement, along with several other YEDF board members, to start operating on a county-wide basis.
“We didn’t have a Bob Tyler back then,” McMinn said. “So we got board members from the entire county,” McMinn said.
It was a move that met resistance from some people in Water Valley, according to McMinn.
“They said, ‘we don’t want our money used county-wide,’” McMinn explained.
McMinn pointed to the small county, competing against larger, neighboring counties as a need for the county-wide effort.
“We have assets here. We got Bob Tyler involved as a director and that’s been great. I don’t know what the solution is. I have been fighting this fight for 10 years or longer. It’s going to be a difficult thing to get the City of Water Valley and the county– everybody on the same page. It has always been for some reason. We need to come together some way or another. So if y’all can figure out how to do it, I will be very supportive of that effort. That’s what I have been trying to do for 10 years,” McMinn said, adding that he had been unsuccessful.
(Editor’s Note: Next week we will trace the history of the county’s economic effort, starting with the YEDF and continuing to the current economic district under the direction of Tyler. We will also look at the initial funding for YEDF.)