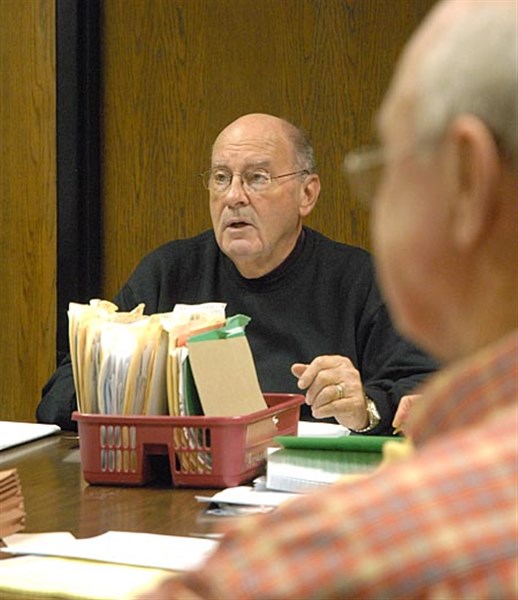 Mayor Larry Hart explains the procedure for the city to commit to support minority/women business enterprise.


WATER VALLEY – Alder-men made a commitment to support minority/women business enterprise at the December meeting of the mayor and board.
The commitment was in the form of a resolution suggested by North Central Planning and Development District officials that has to be made part of the city board’s official record.
Mayor Larry Hart read the resolution, which states the city will support and encourage the participation of minority/women business enterprise in every aspect of their community development block grant projects.
The mayor listed three requirements that the city must meet. One is to utilize the current Mississippi minority directory. Two is to contact at least two minority/women owned businesses by certified mail in an effort to solicit proposals or bids on CDBG projects. Three is to maintain records to document the extent of the efforts and the contractors involved and submit semi-annual contract and subcontract reports to the Community Service Division of the Missis-sippi Development Au-thority.
Alderman Larry Bell asked, “What is it really saying?”
Mayor Hart responded, “We have to be open to receiving bids and make an effort to involve the minority businesses and women businesses in any contracting that we do.”
He also explained that NCPDD takes care of that as part of their handling of the city’s grants, but the resolution had to be in the board’s minutes. The mayor added that the resolution was just bringing the city up to date on the requirement.
Among other actions at the Dec. 3 meeting, aldermen:
• Heard a report from Water Valley Main Street Director Mickey Howley.
Included in his report were comments on the new sign on the side of the Herald building; a presentation by the senior Integrated Marketing class at Ole Miss and the Christmas in the Valley event, which was originally scheduled for Friday, Dec. 6, but since has been moved to this Friday evening.
Christmas in the Valley is a joint effort by the Chamber of Commerce and the WVMSA. Among the events scheduled for Friday night starting around 5:30 are music from the pavilion, late evening shopping and carriage rides, according to Howley.
• Were informed of the city’s holiday schedule. Mayor Hart said that the city’s work force would take Tuesday, Dec. 24, and Wednesday, Dec. 25, for the Christmas holidays and Wednesday, Jan. 1, for New Years.
• Authorized the purchase of a new police car at state bid price, approximately $22,000.
• Entered executive session to discuss an employee matter. After discussion, aldermen voted to place the employee on unpaid leave under the federal Family Medical Leave Act.