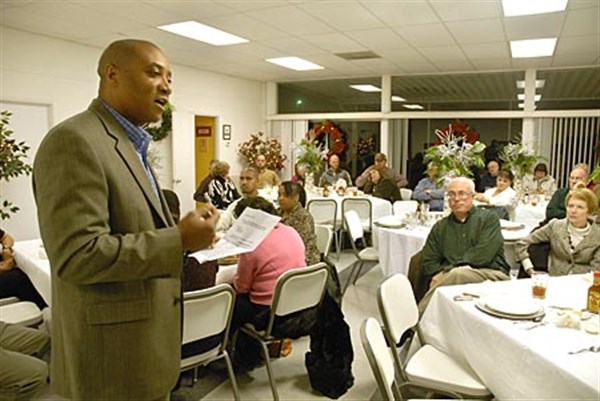 TVA Mississippi District Manager John Malone spoke during the observance of the 75th anniversary of the relationship between the Water Valley Electric Department and the Tennessee Valley Authority. 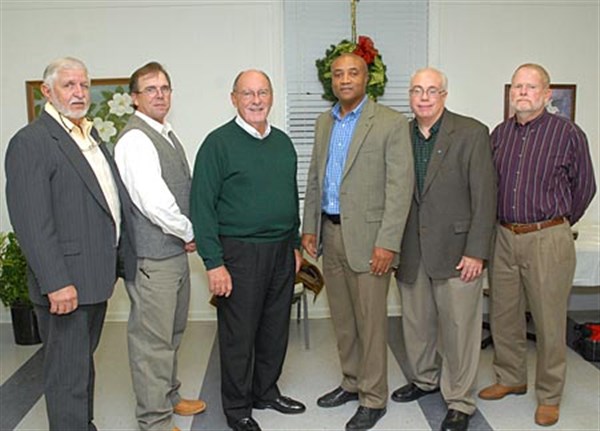 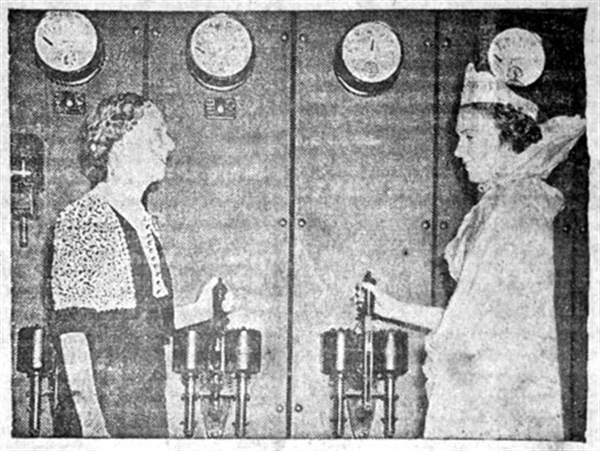 The switchover was pictured in the Jan. 5, 1939 Herald with Mrs. Florence Wagner Stephens and Watermelon Queen Elizabeth Caulfield throwing the switches. Mrs. Wagner, who as a girl of 18 turned on the switch at the first municipal power plant in 1895 withdrew the switch as Miss Caulfield, 1938 Watermelon Queen, plunges in the switch signifying the era of TVA power for Water Valley.


WATER VALLEY – The city electric department and the Tennessee Valley Authority are celebrating a 75-year partnership that began just five years after the creation of TVA in 1933.
Saturday night at a banquet held here honoring the anniversary, John Malone, General Manager of the TVA Mississippi District, said that their mission in the beginning was to “change and improve the standard of living of the people of the valley.”
He noted that TVA focused on the challenges of the day including economic development, flood control and harnessing the energy of the river to produce low cost electricity. “We got power to places where other utility companies did not want to go,” Malone said. “Today we can see the results of our mission.”
He emphasized that TVA receives no subsidies from the federal government. “Everything we do comes from our power sales. Our vision today is to be one of the nation’s leading providers of low-cost and cleaner energy.”
“We want Water Valley to thrive,” Malone said. “We hear about the expansion in Water Valley and the good things going on at your plants.”
“Let’s talk about our partnership,” he said. It’s December 1938. Two entities – Water Valley and TVA – come to an agreement on electric service. The power contract is signed and the partnership begins. What a partnership is has been.”
“Tonight it gives us great pleasure in celebrating this milestone with you. Seventy-five years of public service. Thank you Water Valley for your 75 years of partnership. We appreciate it,” said Malone.
Mayor Larry Hart thanked TVA for being a partner and for “always being there for us.”
The mayor reflected on the past 48 hours of bad weather and how TVA and the Water Valley Electric Department had gotten “stronger and stronger” in their ability to deal with it. “We’ve got better equipment than those guys had back when it all began.”
Hart said that he couldn’t say for sure how many years he had been involved, but that it has been 20-plus. “Every doggone year we have wonderful people working for us…do anything in the world…come out in the middle of the night and get the job done. That’s the kind of department we have.”
Earlier in the evening, current electric department manager Andy Hall praised the relationship with TVA, calling them “family.” He also recognized former managers Eddie Magee and Joe Newman and thanked his staff and crew. “I appreciate every one of you,” he said in an emotional tribute. “We are family and that’s all there is to it.”
He also recognized Jack Gurner Sr., long-time resident and former instrument repairman for Columbia Gulf Transmission Com-pany, for his volunteer work and for sharing his knowledge with the department.

History Of The Partnership With TVA

The North Mississippi Herald chronicled the history of Water Valley’s relationship with TVA, reporting on important events as the story unfolded.
In the Feb. 3, 1938 issue, it was reported that Earle Wall, division manager for TVA based in Memphis, was to meet with Mayor W. E. Blackmur and the board of aldermen to discuss securing a contract with TVA. Just below that story was another about petitions being filed with the city board praying for an election on the issue.
The Herald put out a rare “extra” edition for the next day with a bold six column headline stating, “Election Called For Wed., Mar. 2 On TVA.”  The story contained information that noted that the wholesale cost to purchase TVA power would be one-half what it cost the city to produce it.
Mayor Blackmur made a statement supporting TVA, stating “Personally I endorse TVA and I am working to secure it for our city, and will vote for it.
Another item reported that J. C. Sides, president of the Tallahatchie Valley Electric Power Association, stated that citizens of Tallahatchie County were working to secure a line to distribute TVA electric current to more than 300 farm homes.
In the Feb. 10 issue, city leaders were urging citizens to vote for TVA. According to the story, the existing municipal generating plant was in “somewhat decrepit condition” with some of the units almost worn out and in need of replacement. Among the problems was the variation of the current which caused motors to sometimes go to fast and other times almost stop.
Herald Editor, Bramwell Davis, who referred to himself as “proprietor,” noted in an editorial that no industry is going to be unwise enough to locate in Water Valley until it can power at TVA rates.
The Feb. 17 issue continued the TVA story with a headline touting the benefit of users paying less and the city getting more money.
On the front page of the Feb. 24 issue, the headline read “Other Mayors Declare Water Valley Would Make Great Error To Reject TVA.” Also included was an interview with John Eddie Hale, superintendent of the city electric department, who told the Herald that the generating plant couldn’t handle a projected 30 percent increase in load such as would be required for an industry.
He was asked to comment on rumors that homes would have to be rewired if TVA power came to the city. “The TVA current will be carried by household wires just as readily as the present current,” he explained.
In the March 3 edition, it was reported that all four wards cast an overwhelming vote to accept TVA power for the city. The vote was 526 for with 45 voting against.
“The citizens of Water Valley can raise their voice in song, ring the bells of gladness and turn loose the dogs of joy this morning,” the Herald March 10 story read. “For at long last, after weeks and months of wrangling, waiting and controversy, the city is to have TVA.”
The city board signed the TVA contract unanimously during a recessed session on March 9 with Mayor W. E. Blackmur and Aldermen Claude Wood, C. C. Bennett, Dr. S. W. Truss, and Arch Carter. It was unclear if Tom Myers signed because he was said to have been out of town, probably because he worked as an engineer on the ICRR.
It was about eight months before government engineers came to town to look for right-of-way for the TVA lines, the Herald reported Nov. 10. But, they predicted power would be on by Dec. 15.