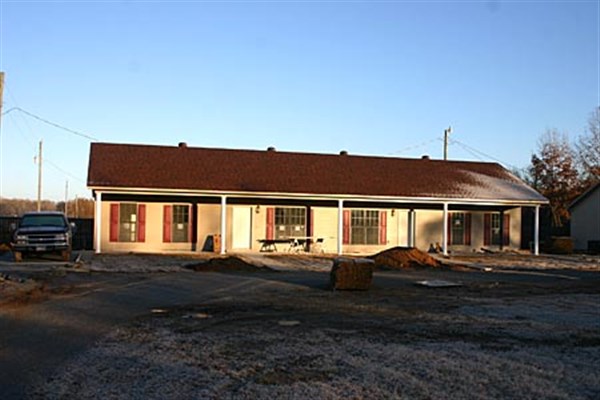 Construction was recently completed on this duplex, but the owner did not comply with the county’s flood ordinance and the structure is 18 inches below the flood plain. The duplex is located on County Road 426, just north of the Coffeeville municipal limits. – Photo by David Howell


COFFEEVILLE–An apartment duplex constructed on County Road 436 without proper county permitting may never be eligible for flood insurance.
Larry Townes recently completed construction on the duplex without first obtaining a county developer’s permit. The duplex is in a flood plain and now Townes cannot obtain a 911 address from the county, which means T.V.E.P.A. cannot provide electricity.
The county can’t issue the address because Townes’ duplex doesn’t meet requirements adopted in the county’s comprehensive flood insurance ordinance. The ordinance was adopted back in 2010 as a step to enroll the county in the National Flood Insurance Program (NFIP), which allows property owners in the county the option to purchase flood insurance through the Federal Emergency Management Agency (FEMA) if their home, business or other property is in a flood plain.
Enrollment in the NFIP also allows the county to receive disaster aid if there is major damage from an earthquake, tornado or other calamity.
The developer’s permit is an important part of the ordinance – it allows the county’s flood plain coordinator, Billy Humphreys, to track projects in Yalobusha to keep the construction compliant with the county ordinance, which in turns keep the county in compliance with the NFIP. The permit is free.
Townes’ construction without obtaining the permit did not allow Humphreys to inspect the project and his duplex is 18 inches below the flood plain. This puts Townes in a dilemma, a dilemma he brought to the “first Monday” supervisor meeting on Dec. 2 looking for help.
“I just put it up and wasn’t aware that I needed to see somebody,” Townes explained. He added that he found out when he went to get a 911 address, and was directed to a board meeting.
“You weren’t aware that you needed a permit, as many times as it was in the paper?” Board President Tommy Vaughn asked.
“Maybe so, but I didn’t see it,” Townes answered.
“How did you get power,” Chancery Clerk Amy McMinn asked.
Townes explained that he used power from an adjacent duplex he also owns during the construction.
After examining the ordinance, Board Attorney John Crow outlined three options identified in the ordinance–tear it down, raise it 18 inches or go through the court system to get an exception.
EMA Director Frank Hyde provided more detail on the process to gain an exception during a recessed meeting held on Dec. 5.
Hyde said he had contacted MEMA officials and learned the exception could be granted.
“They don’t like to do it,” Hyde said. The exception will require the county to actually take Townes to court, providing proof that he was instructed to bring the structure up to code and did not comply,” Hyde explained.
Hyde said the process is spelled out as part of Section 1316 of the National Flood Insurance Act of 1968, which allows the county to declare a structure in violation of a law, regulation, or ordinance. Flood insurance is not available for properties placed on the 1316 Property List.
“He can never have any kind of flood insurance or disaster relief funds. It is like a cloud that follows that deed forever,” Hyde explained. The process also relieves the county of any problems that could jeopardize enrollment in the NFIP.
“He needs to pay for all this,” Crow added.
“That is what it would look like to me,” Board President Tommy Vaughn agreed.