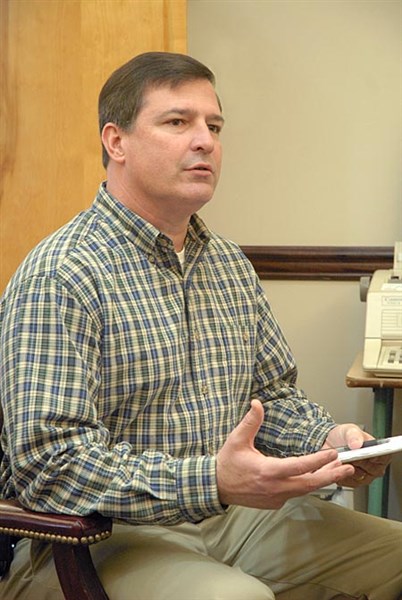 Mike Robertson, food service director for the school district, explained the results of a recent very positive audit to trustees at their meeting last Thursday. – Photos by Jack Gurner 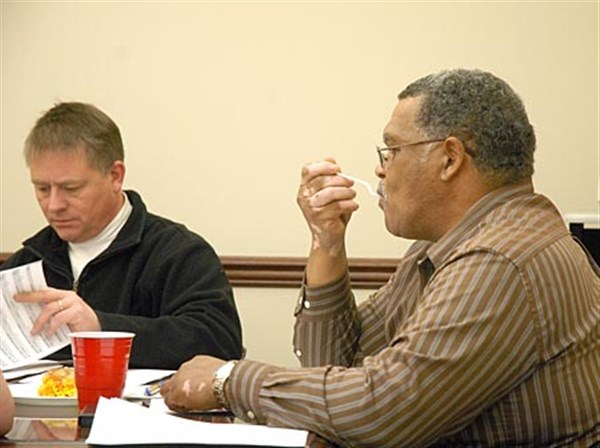 School Board President Lamar Burgess “sneaked” a bite of cake during a noon board meeting last Thursday. Board trustees shared food provided by school staff members during their last meeting of the calender year.


WATER VALLEY – Six cents may not seem like a lot of money, but it mounts up when added to the 32 cents reimbursement for each meal served in the school district’s two cafeterias.
The district is receiving the money to promote offering more vegetables and fruits, meeting the meal components guidelines and staying within the recommended calorie range, according to Mike Robertson, food service director for the school district.
“This is one of those times when the state of Mississippi is ahead of the nation,” Robertson said. “The state is really taking a proactive role in getting healthy meals fed to our kids.”
He added that Mississippi’s child obesity rate – which was once the highest in the nation – has come down in the past three years. Although we are still the second highest, behind Louisiana.
Robertson told school board trustees at their meeting last Thursday that the school district’s food service program is in very good shape, according to a just completed audit by the State Department of Education. They came in knowing that I am new,” he added, referring to only having been with the local system since spring.
Superintendent Kim Chrestman said that Robertson was being modest. The auditors commented on the hard work he has put into the food services program. “They were very complimentary of Mike and the improvements he has made,” Chrestman said.
Among other actions at the Dec. 19 meeting, trustees:
• Heard a financial report from District Business Manager Randy Goodwin, who reported that the fund balance was $1,625,118.52.
• Heard the Superinten-dent’s Report from Chrest-man, who thanked members of the Water Valley Arts Council for judging visual arts pieces from Davidson Elementary School. Approx-imately 15 to 20 pieces were selected for a winter art show in the lobby of Renasant Bank on Central Street.
The superintendent noted “everyone was settling in with the administration situation at both campuses.” He was referring to High School Principal Dr. Glenn Kitchens taking over as interim principal of Davidson Elemen-tary School, filling the vacancy left by the tragic death of Dr. Carol Gary and retired educator William Cotton of Houlka, a veteran of 40 years in Mississippi schools, taking over as interim principal at WVHS.
“The faculty and staff at both sites seem to be comfortable with the administration and what’s going on,” Chrestman said. “It’s probably as good as we could expect under the conditions.”
• Entered executive session.