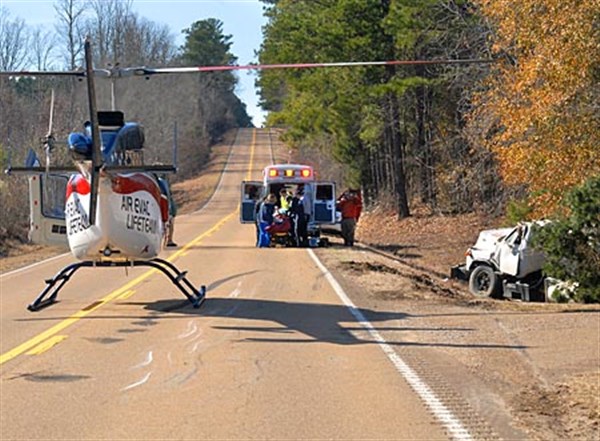 Shawn Davis was airlifted to the Regional Medical Center in Memphis after he was injured in a vehicle accident last Wednesday on Hwy. 32. – Photos by Jack Gurner 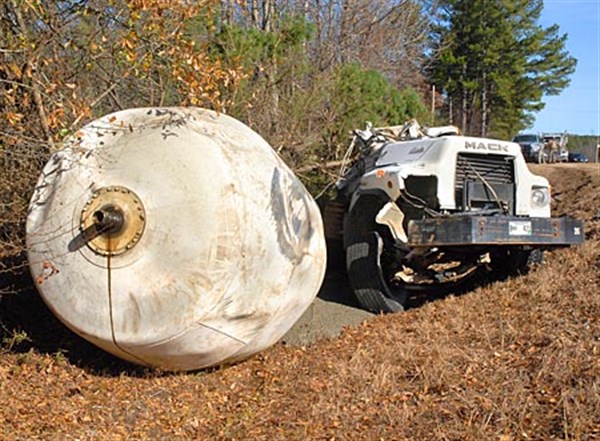 
An account has been set up at Renasant Bank for Shawn Davis, who was injured in a vehicle accident last Wednesday.
Davis was air-lifted to the Regional Medical Center in Memphis after the concrete truck he was driving left Hwy. 32 West and the concrete drum dislodged and crushed the cab of the truck.
Davis told first responders at the scene that the truck made a loud noise and he lost control.
“He said he tried to hold the truck in the road, he just couldn’t hold it,” his wife, Jennifer Davis, told the Herald.
Davis was headed to pour the concrete near Charleston when the accident occurred, his second trip of the day to the Tallahatchie County location. He works for Morris Ready Mix, Inc. in Water Valley.
His mother-in-law, Deborah Griffin, told the Herald that he does not have insurance. She also said Sunday that he was sitting up and talking a little.
“He is a miracle,” she added.
Donations deposited into the  Renasant Bank account will help offset medical expenses and his family’s needs. Davis was scheduled to have surgery Monday for reconstructive surgery on his face.