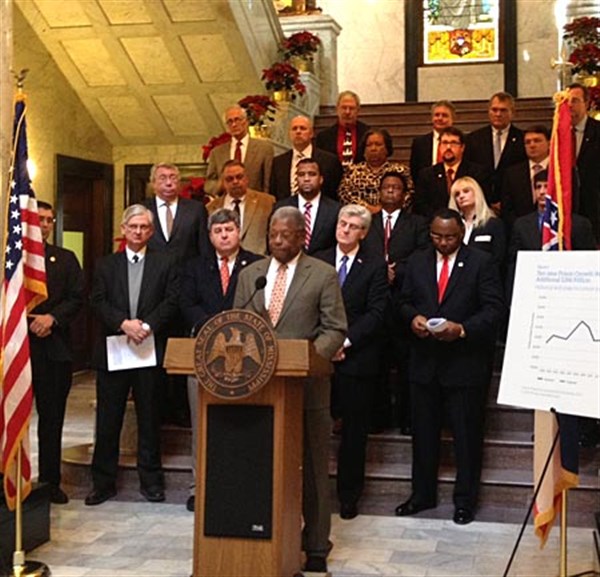 Members of the 21-person task force including sheriff Lance Humphreys revealed their recommendations during a meeting at the capitol last Tuesday. The group worked during 2013 to make recommendations to ease the state’s correction budget. – Photo Provided


JACKSON– The Mississippi Criminal Justice Task Force, chaired by Commissioner of Corrections Chris Epps, announced a comprehensive plan to improve the state’s criminal justice system last week. Sheriff Lance Humphreys was one of 21 professionals selected from across the state to serve on the bipartisan task force that included lawmakers, judges, law enforcement and defense attorneys.
Humphreys said the plan comes after months of work and will provide  recommendations for legislators as the 2014 Legislative Session gets underway next month.
“Our focus was identifying cost-effective, evidence-based policies that protect public safety, ensure clarity in sentencing, and control costs,” Humphreys reported.
Without action, Missis-sippi’s prison population is expected to rise by nearly 2,000 over the next 10 years. If implemented, the Task Force recommendations will halt the growth and safely reduce the population, saving a minimum of $266 million.
“Behind Louisiana, our state has the highest per capita incarceration in the country,” Humphreys explained.  “This has caused the state’s correction budget to increase which ultimately affects us at the local level,” Humphreys told the Herald. “We get criminals sentenced, but they only serve a small portion of their time before they are out on the streets again.”
A number of top officials in the state have voiced support for the plan, including Gov. Phil Bryant, Lt. Gov. Tate Reeves, House Speaker pro tem Greg Snowden. The task force originated with a bill Snowden authored during the 2013 Legislative Session.
Key findings for the report include:
• Three-quarters of offenders admitted to Mississippi prison were convicted of a nonviolent crime, and
• Just seven percent of the corrections budget is spent on community supervision programs such as house arrest, probation, or parole, although 64 percent of offenders are on community supervision.

Lessons learned
A growing number of states are taking significant steps to improve their criminal justice systems and Mississippi is poised to be next, according to a press release that accompanied the report. Successful reforms in states such as Arkansas,  Georgia, South Dakota, Kentucky, and South Carolina  highlight a variety of research-based strategies for nonviolent offenders that protect public safety, hold offenders accountable, and control corrections costs.