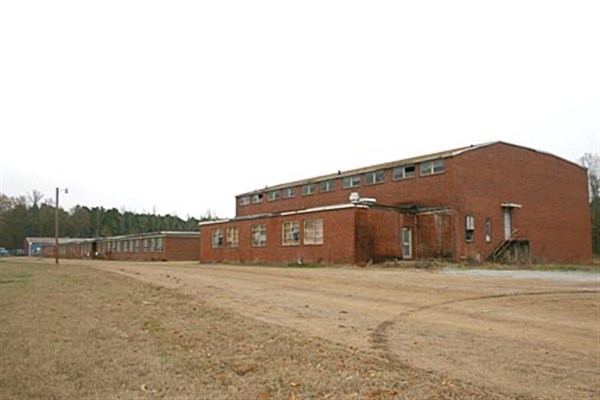 The West Yalobusha Community Action Agency was granted a five-year lease renewal on the old Oakland School Monday. The group uses the southern portion of the facility (right side) for family reunions and other gatherings, and the gym area for children to play ball. – Photo by David Howell


COFFEEVILLE–Yalobusha supervisors executed a five-year lease with West Yalobusha Community Action Agency, Inc. for use of the old Oakland school, located on Hwy. 51. The lease renewal was approved during the “first Monday” meeting Jan. 6 after competing groups expressed interest in the facility in recent months.
Although their earlier lease agreement had lapsed in 2008, the West Yalobusha Community Action Agency had continued to use the old school and maintain liability insurance on the property.
But Melvin Gary countered that the non-profit only used the building sporadically and he could better utilize the building as a center for on-the-job training for at-risk, unemployed people in the county. Gary said training would be offered for learning how to operate heavy equipment, agricultural machinery, computer networking and possibly telemarketing.
He requested a lease or a possible lease-purchase arrangement with the county for the property.
Gary first appeared before supervisors back in 2007, and revisited the issue in November. That visit brought the status of the current lease into question, and pushed the issue into a subsequent December and January supervisor meeting.
“I am here today to get a response back from the board,” Gary told supervisors on Dec. 2.
His ultimatum prompted District Five Supervisor Frank “Bubba” Tillman to inquire about the current status of the building.
“Lizzie (Earl) is the one that has the building now. Have they decided that they don’t want the building?” Tillman asked.
Board Attorney John Crow had examined the paperwork for the facility after the November meeting and explained the current lease had expired.
“It expired five years ago. We did it back back in January of 2003,” Crow explained.
Tillman noted West Yalo-busha Community Action, Inc. had maintained liability insurance on the building as required under their former lease agreement.
Supervisors also looked to Crow for legal advice regarding Gary’s request. Crow noted that the county cannot execute any kind of agreement with Gary until he gets the necessary paperwork completed to incorporate as a non-profit organization.
With both the West Yalobusha Community Action Agency, Inc. representatives and Gary at the December meeting, Board President Tommy Vaughn looked to Board President George Suggs for input. The former school is located in his district and his county shop shares acreage on the north end of the facility.
“I want to get with Yalobusha (West Yalobusha Community Action Agency) first and see what they want to do with it,” Suggs answered.
Suggs also said his shop would not be moved, putting to rest an earlier inquiry from Gary about possibly obtaining all the acreage at the school including the county barn.
In Gary’s final remarks back in December, he assured county officials he could get the necessary paperwork completed.
“Whatever I  need to do to get where I need to get is what I am willing to do,” Gary said.
Suggs also suggested Gary work with Earl to share use of the building.
“I am trying really hard to get the board to understand we have a much broader vision for the facility, versus having some other smaller groups come and attach themselves. The more people you have involved, the more contention. The more difficulty it is to make a decision to go forward,” Gary responded.
Instead, Gary argued a smaller group would be more successful without involving another group that has a different agenda. Gary also noted that his group did not invite the county to get involved in the project.
“We wanted to be able to have free-course, free-will to develop this project the way we feel it needs to be developed so the community itself can applaud it at the end… Let us do something for ourselves and not have to involve the government all the time,” Gary said.

Lease Terms
The issue was settled Monday when Earl’s request was on the meeting agenda.
“We want to know whether we can have it back or not?” Earl told supervisors.
Supervisors were favorable to renewing the lease for Earl, but stipulated that the non-profit begin paying the utility bills for the school. Although the old lease had required the non-profit to pay utilities, the electric bill remained in the county’s name and was paid by the county.
Getting the utilities transferred was prompted by both Suggs and Tillman, who explained the lights were often left on at night.
“Every Friday evening I go through and turn the lights off,” Suggs said.
“Sometimes the gym lights are on all night. I don’t know if you know that?” Tillman added.
Tillman also asked how usage at the building is monitored.
“We let them in. We let our kids come play ball, or have a family reunion or something like that,” Earl answered.