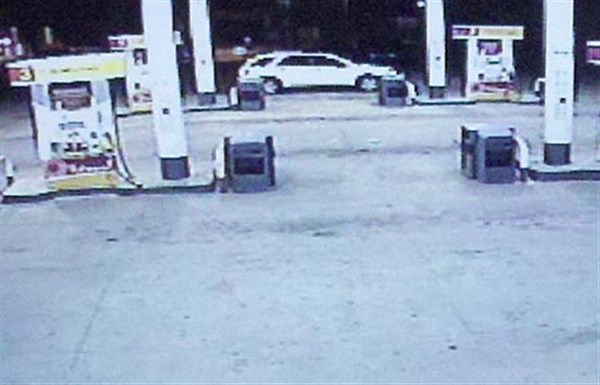 This surveillance photo shows the car the men used to rob the Exxon Station in Oakland early Monday morning.


OAKLAND–Authorities are searching for three men wanted in connection with  an early morning armed robbery at the Shell Station in Oakland Monday.
Oakland Police Chief Russ Smith reported two males entered the business at 1:09 Monday morning, guns drawn, and took cash and other items from the business. Two customers were also robbed at gunpoint as they entered the business during the 15-minute holdup.
Although the store had surveillance cameras, Smith said the two men were well covered during the frigid night and the footage did not provide a good description of the two robbers who entered the business, nor the driver who remained in the vehicle.
“One of our suspects was wearing khaki pants, a gray pullover and scarf. We know that he is a light-skinned, African-American male,” Smith told the Herald. The weapons brandished by the pair included a silver revolver and a small-caliber black handgun.
Smith also said witnesses reported three shots were fired during the holdup. During the investigation, authorities were not able to find any bullet holes in the building.
“I don’t know if they were shooting blanks or what,” Smith told the Herald.
One of the shots was reported fired as the men were getting money from the cash register. Another shot was fired near the bathroom and the third as the pair was exiting.
A game machine inside the business was also targeted by the men. A $200 cash prize and an electronic item valued at $200 dangling in the display were removed from the machine.
Smith said the two robbers got a pretty good jump before authorities were notified. They were in the store from 1:09 to 1:24 a.m., and the 911 call came in at 1:34.
“They had about a 10-minute head start before the clerk called 911,” Smith explained. The delay came after the occupants in the store were ordered to lay on the ground and pull their jackets over their head.
“They also told them, you better not get up,” Smith said.
Smith said his department is working several leads including interviewing a person of interest at presstime Tuesday.
The suspects face multiple charges, including armed robbery, grand larceny and burglary of a gaming machine.
Chief Smith said anyone with information about the robbery is urged to contact Yalobusha County Crime Stoppers. The organization will pay up to $1,000 for information about this crime. You can contact Crime Stoppers at 1-866-933-TIPS or 473-4935.
Tips can also be sent by email to: TIPS@ Yalobusha County.net. Crime Stoppers callers are never required to reveal their identity nor testify in court.