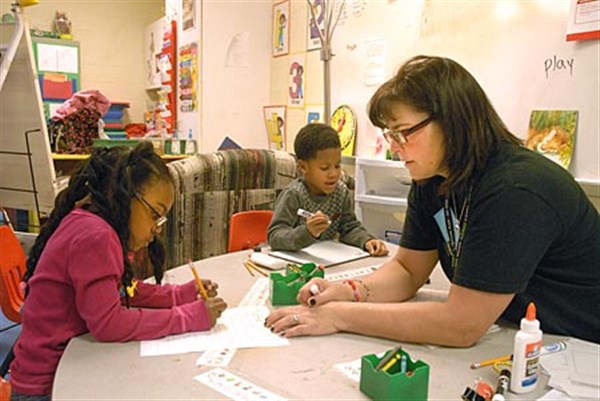 Davidson Elementary School kindergarten teacher Charla Stark works on a language lesson with Mariah Wilson. Channing Freeman is studying in the background. Stark, who has already been using Common Core material, said that she has seen improvements in her students’ work. Below students work on various projects in the class. – Photos by Jack Gurner 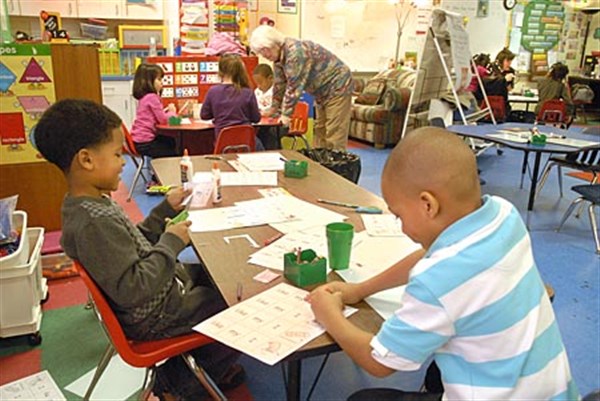 
WATER VALLEY – The local school district – like other districts in the state – is moving toward full implementation of Common Core for the 2014-2015 school year.
While some opponents are still fighting the new education standards, Gov. Phil Bryant and leaders of the state legislature support the adoption of Common Core. Trying to calm some of the fears, Gov. Bryant has repeatedly said he would not stand for interference from the federal government in state education curriculum.
Water Valley School District Superintendent Kim Chrestman explained that Common Core is not what it is being portrayed on the national level. “Common Core is a set of educational standards. It is not a curriculum, as such.”
“Each state should develop their curriculum according to the Common Core standards,” he continued. “The standards are set to increase rigor and focus on the content of the material and the way it is being taught. Hopefully the academic outcome will increase.”
The superintendent conceded that there would be a number of shifts in how things are done under Common Core. “One of the major shifts we are seeing is the complexity of the reading and the complexity of how things are taught.”
“We are trying to move students to perform at the analysis, the syntheses and the application level instead of just at the knowledge level,” said Chrestman.
Another shift is in the way text is used. “Common Core is going to force us to increase the reading level of students and it is going to force us to teach at the reading level of students.”
While students will continue to read literature, additional emphasis will be placed on reading non-fiction. “When they get out into the real world (they will have to read) text in manuals. Students are going to have to be able to read and pull out content and be able to analyze and utilize that.”
A similar approach will be taken with the teaching of math. “Not only are they going to have to be able to solve problems, they are going to have to be able to show why they chose a particular method to solve a problem,” he said. “Because there is not just one way of doing things, they have got to be able to use multiple approaches.”
“In English and language arts we are going to be focusing on reading and writing as well as speaking and listening. We’ll be using some historical and scientific documents to teach content. Likewise, we’ll be using reading and writing in our science and our social studies.”
“Ultimately it is standards and not curriculum,” Chrestman emphasized. “Mississippi should be responsible for developing our own curriculum that matches the Common Core standards.”
“As we move toward the Common Core standards, what we have to remember is what is driving all the changes is technology,” he added. “Most of our assessments and the way we are going to be teaching are going to be technology based.”
The superintendent said that students would have to be prepared to use the technology. “If they can’t use the technology, they can’t convey what they do know.”
All the additional technology means that the school district will have to increase available bandwidth and the overall technological capability in order to implement what is being required.
Competing Globally
The need for Common Core standards developed as American educators studied highly effective education systems in other countries, many of which are ahead of the United States academically. The common thread was that they had developed educational standards. In the US, there was a hodgepodge of standards that varied from state to state.
“Realizing that we had moved into a global economy and the United States was going lower and lower academically, they saw a need. This has been more of a process that has been going on since around 2000 to 2004,” said Chrestman.
About four or five years ago the discussion turned toward developing national standards. “Not a national curriculum,” he reiterated. “Common Core is meant to be national standards. Each state is responsible for developing the curriculum that goes with the standards.”
Some special interest groups, who thought Com-mon Core was to be a national curriculum, have tried to take the standards and infuse it with their political or social agenda, according to Chrestman. He gave as examples issues such as same sex marriage, immigration reform, ethnic history and religion.
“Certain groups wanted to held develop a reading list that would be matched with the standards because their political agenda was tied to certain books.”

Funding Common Core
Chrestman said that one of the big questions is how Common Core will be funded. “They are throwing more and more costs, more and more responsibilities on districts and we are getting less and less money. More and more personnel are being required to implement, but you are getting cut funding.”
“The hardest ones hit are poorly financed districts that currently do not have the resources. Are they going to cut building maintenance or are they going to cut personnel in order to hire additional personnel that are required to implement these changes?”
“Are they going to have the support mechanisms such as technology personnel to handle all the new, high-end technologies that are going to be needed?”
“Within all of this we are still supposed to insure safety, insure security and we’re supposed to teach these children.”