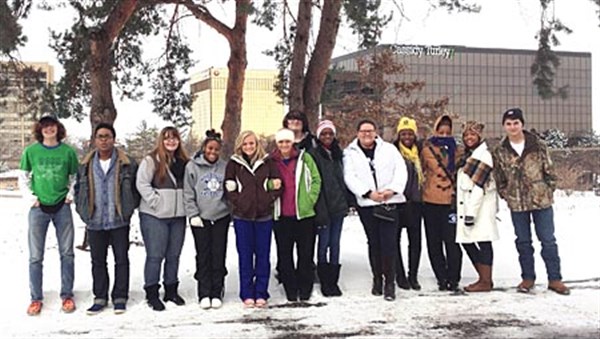 Members of the Water Valley High School BETA Club pose in the snow while stranded in St. Louis on a club field trip. The group was due back Sunday, Jan 5, but didn’t make it home until Tuesday.


WATER VALLEY – Record breaking cold temperatures caused problems for the local school district last week including stranding the Beta Club in St. Louis.
“We realized way ahead of time that we were going to have extreme conditions,” said Superintendent Kim Chrestman, “and we tried to make as much preparation as possible for it.”
“We came in on Saturday and went through each of the buildings to make sure we had heat on and check the buildings for any problems. We actually put antifreeze in the toilets and left water running in certain places.”
“Craig (King, director of transportation) had already taken care of the busses,” Chrestman said. “He had moved some of the busses inside. We made arrangements to get their early on Monday to make sure the busses were started and warmed up.”
When school started Monday morning it was still chilly in the buildings, he said, because of the extremely low temperatures. Then there were problems with a boiler that supplies heat to  one of the buildings at Davidson Elementary School. “We had a motor go out that serves one side of the 3rd and 4th grade wing which includes the 3rd and 4th grade bathroom and affects five classrooms.”
A heating contractor was called in to evaluate the situation and a motor was ordered with expedited shipping so that it would arrive early the next day. As Principal Dr. Glenn Kitchens opened the building Tuesday morning, he discovered a whole new problem. “Water was running everywhere,” Chrestman said. “Water in a coil tied to the heating system had frozen and busted the coil.”
The running water flooded the restrooms, the first two classrooms on that wing and the hallway back to the kitchen. “We immediately shut down the water and got out the wet vacs,” he added.
Because of the way the unit was plumbed, there were no shutoff valves to the heating coils, so water had to be cut off to the school at 7:30 a.m. “We cut into the plumbing and put in shutoff valves,” said Chrestman, who noted that the water was off for about 45 minutes.
Students in the affected areas were moved to classrooms in other parts of the campus so they would have access to heat and restrooms. “It wasn’t ideal conditions, but at all times the students were taken care of,” he emphasized. “They were supervised and their needs were met as best we could under those conditions.”
Heat was back on in the building by 10 a.m. Tuesday. There was a problem with water pressure in the building, but that was also resolved. “All of the things that happened, we have had happen before,” Chrestman said. “When you have buildings as old as ours are, you are going to have these routine problems. What really made the situation worse was the extreme weather we were having.”
One of the questions asked by parents was why school was not dismissed. The superintendent said that the problems only affected about eight percent of the student body and there are a number of factors to consider when making the decision to close the school. “The parents are at work. Who is going to be at home when those kids arrive? Are the parents going to have to take off work or are the kids going to be home alone?”
“To turn out approximately 1225 students has to be a major decision based on the needs of the parents and how the kids are going to be supervised,” he said. “Who’s going to insure safety and see that they are fed? We can do that at school.”
“If we had the whole campus without heat, without water, then we would have likely turned school out,” said Chrestman. “We were able to take the kids who were affected and take them to other areas where they were supervised, where they were warm and where they did have access to water and bathrooms.”
“We tried to choose what is best for the children and for the community,” he added.
Some parents were concerned about DES counting their children absent if they were not at school or were checked out early. That is not a local district decision, Chrestman explained. The state legislature passed law that requires students to be present 60 percent of the school day. Otherwise they are counted absent regardless of the weather conditions. And, schools are required by the state to make up any lost days.
He pointed out that safety of the children is of the utmost importance. While the school district tries to make it through the lunch period so that the students are fed and complete 60 percent of the day, Chrestman said he must consider that if he does dismiss school he is sending kids to homes where there may not be any adult present because they are working.

Stranded In St. Louis
Meanwhile, another group of high school students and their adult chaperones were snowed in while on a BETA Club field trip to St. Louis. And, if the video report from local St. Louis television is any indication, they were having the time of their lives.
Andy Banker of KTVI television reported that the group was stranded at their hotel, but were outside playing in the snow. Eli Hodge, 10-year-old son of teacher Angie Hodge, said he had never seen snow like that and wanted to stay.
Superintendent Chrestman said that the group had been told that there was a threat of severe weather. But, the television reporter noted in his report that they had called some Mississippi transplants in St. Louis who told them that the local weathermen talk about severe weather all the time and it rarely happens.
Chrestman added that school busses in the south are not made for severe cold and the diesel engines have to be warmed up so they will crank. A mechanic was hired to come out and start the bus so their group could return on Tuesday, two days later than planned.
A solenoid in the busses’ heating system was also not working because of the severe conditions, making for a cold trip home.