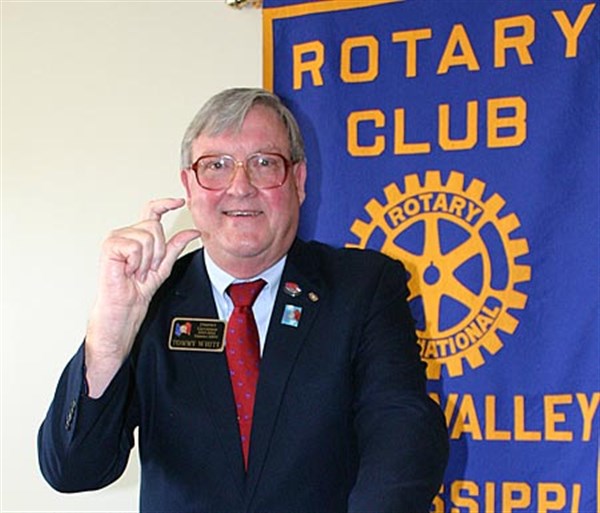 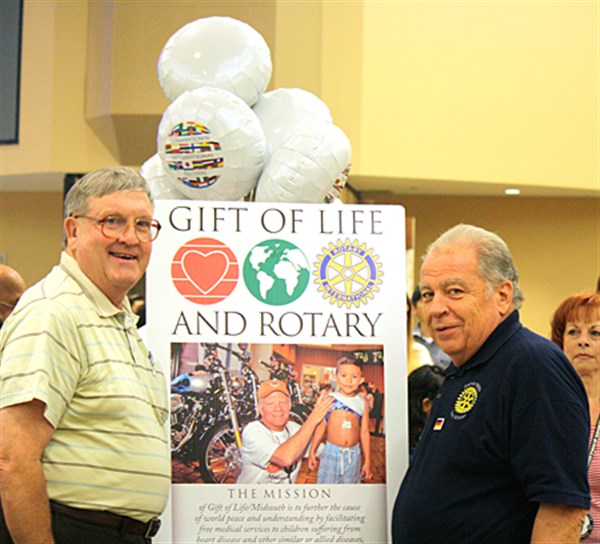 Rotary District President Tommy White and Rotary DGND Tom Wilson display a Gift of Life poster about Rotary and LeBonheur Children’s Hospital’s joint-effort project to correct heart problems and save lives of children all over the world. The display was at Germantown International Festival last August and was part of White’s busy agenda during the last year as District Governor.


WATER VALLEY– Rotary District Governor Tommy White made his 41st noon speech in his district during a visit to his home club in Water Valley on Tuesday.
White is mid-way through his term as governor of District 6800, which spans 42 clubs in north Mississippi and Shelby County, Tennessee. He visits each club to encourage Rotarians to embrace the Rotary mission.
“I saved the best for last,” White told his fellow club members as he traced his involvement in the Water Valley Rotary Club that includes membership since 1974 and perfect attendance for 39 years.
White challenged Rotarians not to be “meet and eat” members, instead to engage in Rotary for a life-changing experience. He cited one of Rotary International’s most successful programs, the worldwide effort to eradicate polio, as motivation.
“We are this close as an international service organization to eradicating polio from the face of the earth,” White said, holding his fingers an inch apart.
White said there were over 350,000 cases reported worldwide each year when Rotary got involved in the 1980s. In the last several years, polio cases have decreased to less than 400 annually.
White also said India had just been declared polio free and the only remaining countries with active cases are Nigeria, Pakistan and Afghanistan. He also explained that Bill and Melinda Gates have pledged to match every dollar Rotary raises, two-to-one, as Rotary works toward a 2018 date to eradicate polio globally.
Turning to the local level, White also challenged Water Valley Rotarians to work to achieve the presidential citation, increase Rotary membership by two percent and to send money to the foundation for Rotary projects.
He also told Rotarians he encourages each club to sponsor students for the annual Rotary Youth Leadership Conference held each spring in Olive Branch.
That conference, held for over three decades, sparked White’s involvement as an active Rotarian early on when Rotary friends requested help keeping the high school juniors engaged in the conference each year.
He enlisted the help of his wife, Linda White, and devised a system  to help track and motivate the juniors attending the conference.  And while White also cited multiple examples where his involvement in Rotary had a huge impact on his life,  none were as personal as his story gaining three beautiful granddaughters from an experience at that leadership conference.
The story started several years after White became involved when he fielded a phone call from Charleston High School’s head football coach, Dean Wright, who was a Water Valley native.
“He said he had this big ‘ol boy, Stefan Ward, who was his starting center and he wanted me to send him to the Rotary Youth Leadership Conference.
White said he was also warned to keep an eye on Ward.
Using the seating chart White had helped implement several years earlier, he  seated Ward two seats over from White’s daughter, Valery, who was also attending the conference that year.
“To help keep an eye on him,” White explained.
“You know what happened to me six-and-a-half years later. I got a son-in-law,” White said. “Rotary is a big part of my life because now I have a son-in-law who brought three of the most beautiful granddaughters home a man could have. And I got that from a Rotary Youth Leadership Conference.”