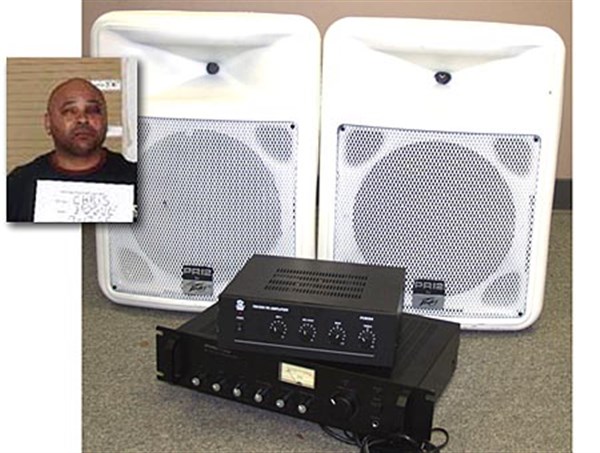 All of the sound equipment reported missing from Philadelphia M.B. Church on December 1 was recovered last week after the sheriff’s department got a tip. Chris Hogue is inset.


OAKLAND–An early December church burglary was solved Thursday after deputies arrested an Oakland man and recovered four speakers and an amplifier.
Christopher Hogue was taken into custody at his home on Redbud Street in Oakland Thursday night after Sheriff Lance Humphreys and deputies executed a search warrant at his residence. The sound equipment was reported missing by Philadelphia M.B. Church, located on County Road 211 outside Oakland on Dec. 1.
Humphreys said  Hogue works part-time as a DJ and the stolen sound equipment was identified at a party he was working. After receiving that tip, Yalobusha sheriff’s investigator Jermaine Gooch worked the case and compiled evidence that led to the search warrant.
“We weren’t expecting any problems during the execution of the warrant but we had plenty of manpower just in case,” Humphreys said.
“When we discovered a handgun inside his house, he went ballastic. He hit two deputies like a linebacker and hit the door headed outside. We had a fight to get him in handcuffs,” Humphreys told the Herald.
Hogue, a former boxer, has previous convictions and will face multiple charges including felon in possession of a firearm, burglary, grand larceny and possession of stolen property.
In addition to the sound equipment, the pistol recovered at his residence had been reported stolen out of Lafayette County in 2012.
“We have physical evidence that will be used to link him to the crime scene at the church,” Humphreys said.
The serial numbers had been scratched off the equipment, but a church member was able to positively identify the equipment that had been customized. The equipment was returned to the church.