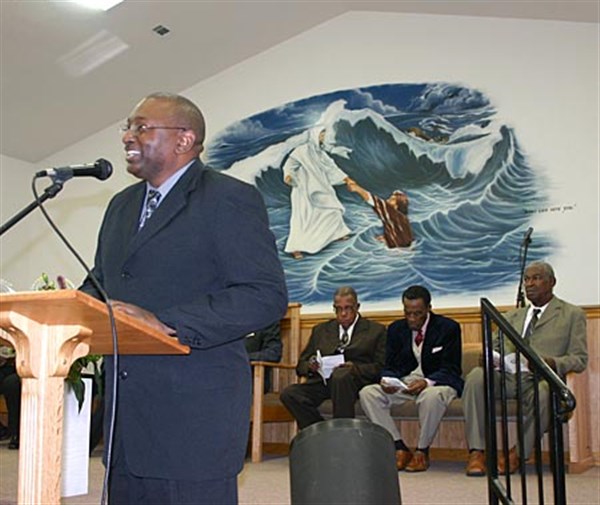 As one of the speakers in Monday’s Dr. Martin Luther King, Jr. Celebration, Coffeeville School Superintendent Eddie Anderson challenged parents to be positive role models for their children. – Photos by David Howell 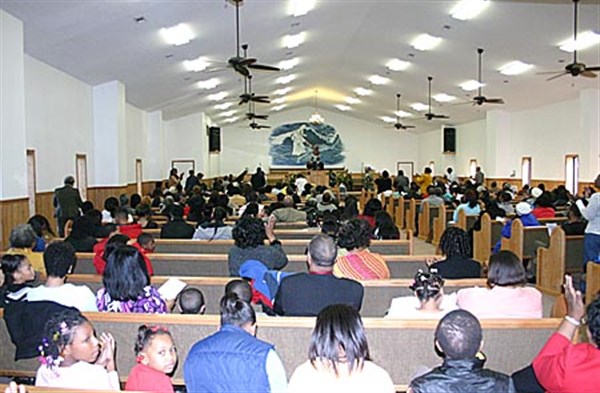 Almost 350 attendees signed in at Monday’s celebration, making this year’s event the largest in history at Mt. Moriah. 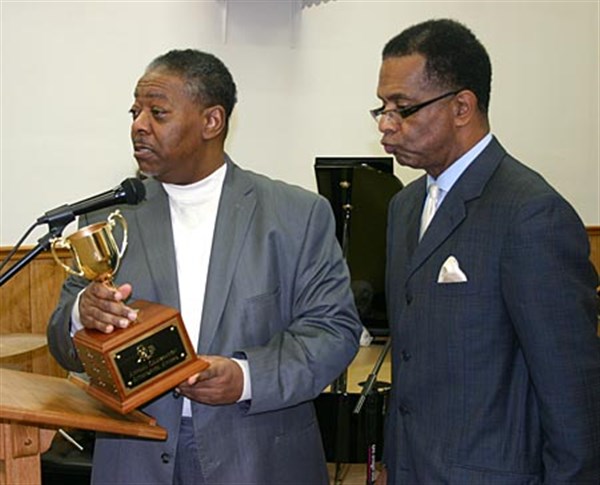 Each year the church with the most members attending the ceremony is recognized with a traveling trophy. After claiming the honor for the last four years, Bethlehem M.B. Church minister Larry Ware turned over the trophy to Bayson Chapel’s minister, Amos Sims. Bayson Chapel had 54 members in attendance. 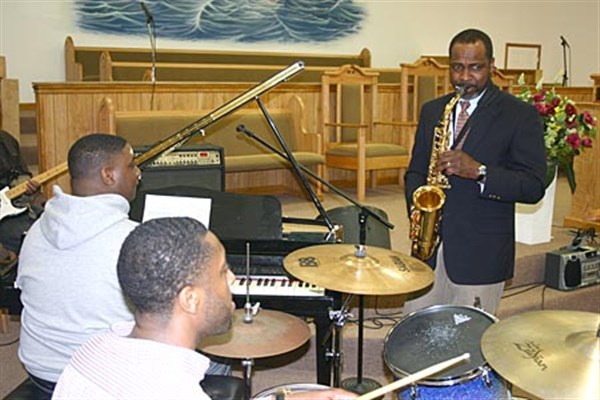 The musicians including Larry Horton on the saxophone received a standing ovation after a rousing performance of Amazing Grace. 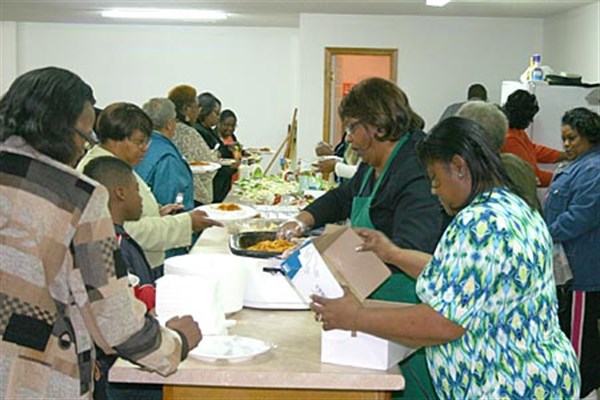 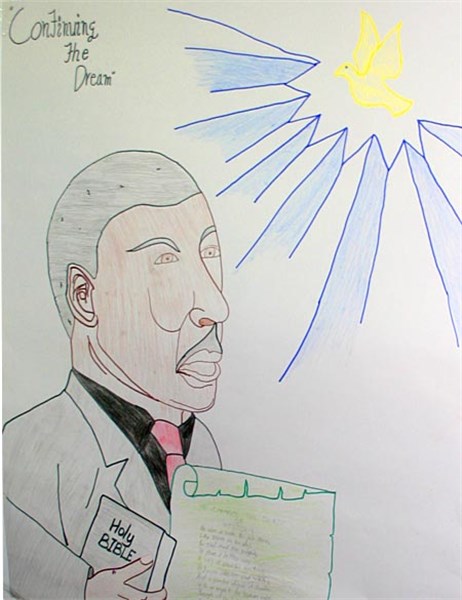 
COFFEEVILLE– More than 350 people filled the Mt. Moriah District Association building to commemorate the dream inspired over four decades ago by Dr. Martin Luther King Jr. It was the largest crowd in history at the annual event.
Speakers from across the county stressed the importance of installing King’s sacrifice and vision into the younger generation during the two-hour service as part of this year’s theme, “Continuing the Dream.” The celebration was hosted by the Yalobusha County Chapter of the NAACP and Mt. Moriah.
Oakland Mayor Riley Swearengen, President of the county’s NAACP, welcomed guests to the annual event.
Swearengen was one of almost a dozen people attending the service who had a personal memory with King during the Civil Rights Movement.
“I had the privilege of marching with him in 1961 down Hwy. 51,” Swear-engen told the group.
“Now our young people need to know about King’s sacrifice,” Swearengen explained. “I want to challenge you. If you don’t have Dr. King’s book in your house, get one and read it.”
Coffeeville Superinten-dent Eddie Anderson was next to take the podium. Anderson pointed to the definition of a dream as an idea or vision that is created in your imagination and is not real.
“But his dream was real then and it is real now,” Anderson said. “Martin Luther King was not just about black people. He was about equality. He wanted to see everybody have opportunities,” Anderson added.
Anderson also pointed to the sacrifice made by King was not to be taken for granted.
“He didn’t go through these things so that we could cower down. Folks, Martin didn’t die so we could go out and sell marijuana. He did not die so we can go out and kill our brains with drugs,” Anderson said.
Anderson also  urged parents to set a strong positive example for their kids.
“We have to have God in our lives to live this dream,” Anderson stressed.
Also important, according to Anderson, is to put forth effort to help continue King’s dream.
“Martin called Missis-sippi a desert state, ‘sweltering with the heat of injustice and oppression,’” Anderson added. “I love my state. Now, I hate the injustices that still prevail in this state. I had the opportunity to go and work in other places but I see a need here.”
Anderson’s comments came to a close with emphasis on King’s character.
“Out of all the things Martin went through, you never find anywhere where he hated anybody. Martin taught us that if this dream is going to  be fulfilled, we got to love our fellow man. Whether he is black or white, rich or poor.”
Chapel Hill M.B. Pastor C. Jerome Battle delivered the sermon as the climax of the celebration.
“No matter where you are in life, He can use you,” Battle told the crowd. “He can use you, you got to be able and willing.”
“Dr. King exemplifies humility. Even unto death. He understood that God has the power,” Battle added.
As the two-hour service ended, Rev. Amos Sims, who serves as moderator for Mt. Moriah, a Baptist association which serves almost 30 churches in Yalobusha, Grenada and Calhoun counties.
“Dr. Martin Luther King never stopped asking the question, ‘What are you doing for others,’” Sims said.
Sims suggested a number of service projects  as an outlet for service including assisting with church landscaping, volunteering at area nursing homes, volunteering to help with the cleaning of your church and visiting and helping the elderly with chores.