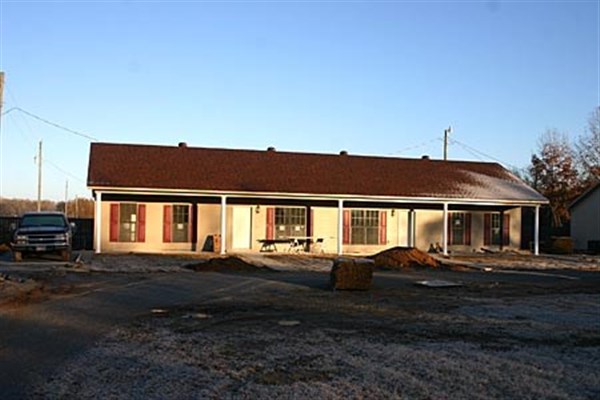 Construction was recently completed on this duplex, but the owner did not comply with the county’s flood ordinance and the structure is 18 inches below the flood plain. The duplex is located on County Road 426, just north of the Coffeeville municipal limits. – Photo by David Howell


COFFEEVILLE – Electricity will soon be flowing to a new duplex on County Road 436 after the owner navigated through the penalty portion of the county’s comprehensive flood insurance ordinance, which includes paying a fine in justice court plus the expense of hiring an attorney.
Larry Townes was almost finished with construction on a duplex located in an area deemed at-risk for flooding on County Road 436, just north of Coffeeville, when he learned he had skipped an important step– obtaining a developer’s permit. Last month he appeared before supervisors requesting help when he could not obtain an E-911 address because of the permit issue.
The county’s E-911 office couldn’t issue the address because Townes’ duplex doesn’t meet requirements adopted in the county’s comprehensive flood insurance ordinance. The ordinance was adopted back in 2010 as a step to enroll the county in the National Flood Insurance Program (NFIP), which allows property owners in the county the option to purchase flood insurance through the Federal Emer-gency Management Agency (FEMA) if their home, business or other property is in a flood plain.
Enrollment in the NFIP also allows the county to receive disaster aid if there is major damage from an earthquake, tornado or other calamity.
The developer’s permit is an important part of the ordinance – it allows the county’s flood plain coordinator, Billy Humphreys, to track projects in Yalobusha to keep the construction compliant with the county ordinance, which in turn keep the county in compliance with the NFIP. The permit is free.
Townes’ duplex marked the first documented case of completed construction of a structure deemed below the base flood elevation level in the flood plain since the ordinance was adopted.
During a hearing on the matter last Thursday in a special-called Board of Super-visor’s meeting, Townes and his attorney, Jay Gore, worked out details with supervisors to allow the matter to be resolved.
Board Attorney John Crow outlined the steps that started with a board order from supervisors acknowledging the violation. With the order and a signed affidavit noting the violation, the matter was pushed to justice court.
“From here we go into justice court for a charge of violating the terms of the ordinance,” Crow explained. Crow also described the civil penalties, which include a fine of not more than $100 and/or imprisonment.
“I don’t think they would invoke that part of the ordinance,” Crow added, a comment that brought chuckles across the room.
Crow explained that navigating these steps will allow Townes an exception on the property, as defined in Section 1316 of the National Flood Insurance Act of 1968. Under the exception, the property will never be eligible for federal flood insurance.
“That’s going to be a cloud on the title,” Crow explained.
Following Crow’s instructions, supervisors voted unanimously to approve a board order and expressed hope that Townes could get the case in justice court as soon as possible so he could get electricity to the duplex.
“It’s regrettable that it came to this. But we do have to follow this ordinance. We are glad things are moving forward,” District Two Supervisor Amos Sims said.