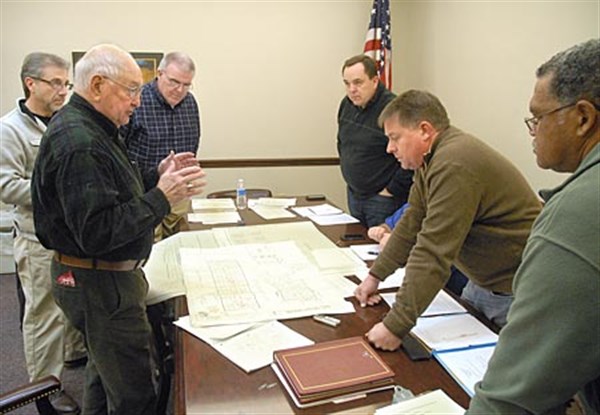 William Mills (left) of Mills & Mills Architects and engineer John Clark Hudson (second from left) appeared before the board during their meeting Monday night to present plans for the HVAC (heating, ventilating, and air conditioning) system and new windows projects. 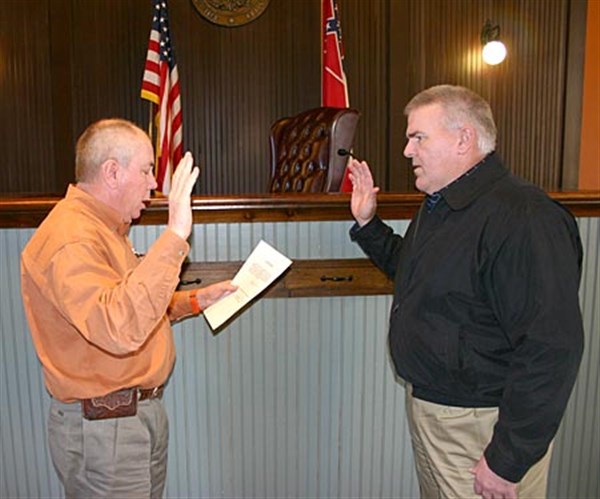 School Trustee – Yalobusha Circuit Clerk Daryl Burney administered the oath of office to Bryan Gilley Monday afternoon at the Water Valley courthouse. Gilley was appointed by the Water Valley School Board last year to fill the vacated District One Position in the school district. Gilley’s appointment is for 2014 and the position will be included in the November General Election to fill the remaining three years in the term. The school’s District 3 Position will also be on November’s ballot. Pier 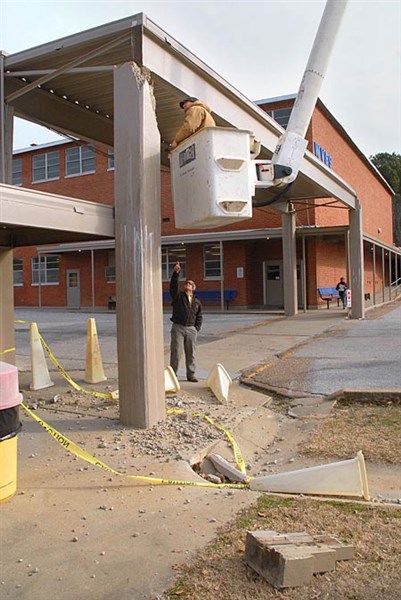 School officials discovered concrete falling off the pillars for the covered walkway between the gym and the main entrance at Davidson Elementary School Thursday morning. “We now realize it was not water or ice damage or anything natural,” Superintendent Kim Chrestman said Thursday morning. “It appears an 18-wheeler came through sometime last night and hit the top.” Closer examination showed scrape marks, debris and wires hanging down from where they were knocked out of position. Chrestman said 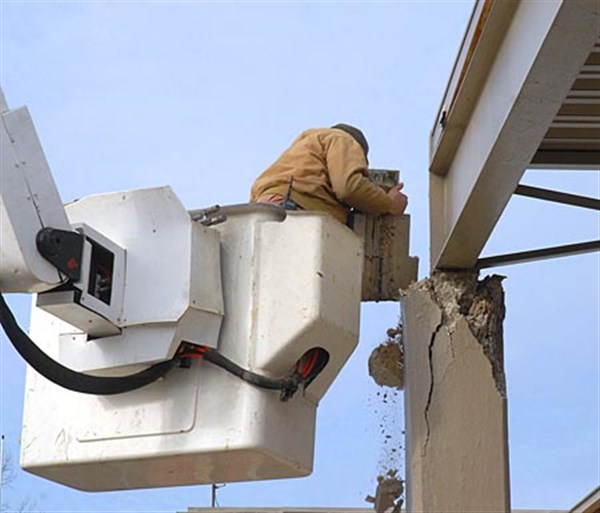 
WATER VALLEY – The school district is only about two weeks away from seeking bids for new HVAC and windows for the high school.
That makes it just about three years since William Mills of Mills & Mills Architects first discussed the improvements with school board members.
Mills and engineer John Clark Hudson appeared before the board during their meeting Monday night to present plans for the HVAC (heating, ventilating, and air conditioning) system and new windows projects.
Mills said that he had been in discussions with Superintendent Kim Chrestman about how to get costs down. “We’re a little above the $800,000 range which is around where we need to be.”
Trustee Pierce Epes asked if there would be adequate light in the building since several windows would be removed. Mills answered that there would still be several sections of windows in each classroom, which would provide plenty of light.
As Hudson explained plans for the HVAC, he said that 2.5 ton units would serve each classroom. He them asked what kind of thermostats were preferred.  “I want something smart enough to save us some energy, but not so smart we can’t run it,” Epes answered.
Hudson explained that the thermostats could be adjusted in each classroom within a limited range.
Among other actions at the Jan. 27 meeting, trustees:
• Elected Lamar Burgess to serve another term as board president. Also elected for another term were Taylor Trusty, vice-president and Casey Washington, secretary.
• Declared busses number 32 and 35 as surplus property so that they can be advertised and disposed of.
• Approved revisions to the Alternative Education Center handbook.
• Granted an out-of-state field trip request for second grade students to attend a program at the Orpheum Theater in Memphis.
• Heard a financial report from District Business Manager Randy Goodwin, who explained that the fund balance as of Dec. 31, 2013 was $1,576,515.96.
• Received a copy of the Superintendent’s Report in lieu of an in-person report from Superintendent Chrestman who was away at a conference. The full text of his report will be included with this story on the Herald website (www.yalnews. com) making it available to subscribers.
• Entered executive session.


Davidson Elementary School is a busy place during this wintery month of January.  We have experienced a few challenges with the cold weather, some heating issues, plumbing issues and a couple of leaks but the students and teachers have been real troopers in making it through each day in spite of these challenges.

Our students have been busy with Acuity and Renaissance testing during the month and most of this round of testing should complete later this week.  Teachers will use this data in making decisions regarding reading instruction and reading levels for students and the Acuity testing is also tied to PBC through the RCU at Mississippi State University.

Teachers have been busy with the M-STAR process and all have now become a part of a Professional Learning Community (PLC).  PLC’s for this school term are Math, Language Arts, Science, Social Studies, Health/PE/Recess, Integrated Arts and Power Hour/Data.  PLC meetings are held on most Wednesday afternoons this semester.

DES wants to thank the Crown Club, an extension of the Junior Auxiliary of Water Valley, and Mr. Sim Ramirez who coordinated a Martin Luther King, Jr. Day of Service on the MLK holiday.  Both of these groups are WVHS students and each group chose a service to DES during the King Weekend Celebration in our country.  The Crown Club and Ms. Vicki Person, their sponsor, spent a portion of the day on Saturday washing, drying, folding and sorting clothing in the DES clothes closet.  They organized the closet and got everything in order.  Mr. Ramirez and his volunteers from WVHS collected clothing to replenish the clothes closet and delivered it to the school on Tuesday following their day of service on Monday.  Thanks again to both of these groups for choosing DES as a recipient of their service.

Fifth and sixth grade students held and competed in a science fair on Thursday and Friday, January 23rd and 24th in the DES gymnasium.  Ms. Sharmon Norwood coordinated this event.  Students did an outstanding job with their projects and enjoyed participating in the fair.  Thanks to Ms. Norwood and the entire 5th and 6th grade teaching staff for their hard work in making this event a success.

The Water Valley Arts Council selected a number of visual arts pieces created by DES students for the Winter Art Show.  These pieces are on display at the bank through the middle of March.  Go by and enjoy this art show if you get an opportunity.

February brings progress reports, the annual character program and a student holiday on Friday, February 14th while the teachers have professional development.  Enjoy each day as we continue with our semester at DES.

DES 5th and 6th graders participated in the Basic Boating Course sponsored by the Mississippi Department of Wildlife, Fisheries, and Parks with hands-on activities which allowed students to practice techniques and the rules of water safety.  The course, which was developed by Supervisory Park Ranger Mike Robinsion, has received both national and international recognition.  WVSD appreciates the Enid Park Rangers for providing this service to the Water Valley students.
Water Valley High School

WVHS had two teams representing our high school Saturday, January 25th, in the Regional Mock Trial Competition in Oxford.  Keli Lindsey is the sponsor.  The first round was from 10:00-12:00 and the second round was from 2:45-4:45.  Winners were announced at 5:00 pm.  The competition was held at the Lafayette County Chancery Courthouse.  The first team consists of Tyler and Shade Epes, Ally Avant, Cooper Clement, Greta Koshenina, Lexi Fowler, and Kelsey Neely.  The second team consists of Payton Bonds, Marshall Allred, Brandon Smith, Austin King, Jackson Ward, AK Burress, and Brian Fox.

The WVHS Beta Club had an interesting trip to the National Beta Convention in St. Louis, MO.  While in St. Louis, the students did get to tour the Science Center and the Bissell Mansion.  But with the snow storm, they did get to stay a couple of extra days….which will likely to be remembered the rest of their lives.  We are extremely grateful to Coach Foust and Angie Hodge for supervising this adventure and bring our students home safely.

Mr. Sim Ramirez along with approximately 15 students sponsored a Martin Luther King Day of Service.  Students and sponsor conducted a clothes drive from 9:00 am to 12:00.  Clothes collected was distributed to the DES clothes closet and other worthy organizations.  What a wonderful way to celebrate Dr. Martin Luther King’s Holiday.

PARCC has moved the sample items from the PARCC website to the same platform that students will use on the field test. This means teachers, students, parents and others will be able to engage with the sample items using computer-based tools such as drag-and-drop, multiple select, text highlighting, and equation builder. PARCC also released online tutorials that demonstrate how students will navigate the test, how to use the computer-based tools and features that make the test more accessible for all students, including those with disabilities and English learners. Sample items and the tutorials are online at http://practice.parcc.testnav.com/#, or visit http://www.parcconline.org/computer-based-samples for more details.