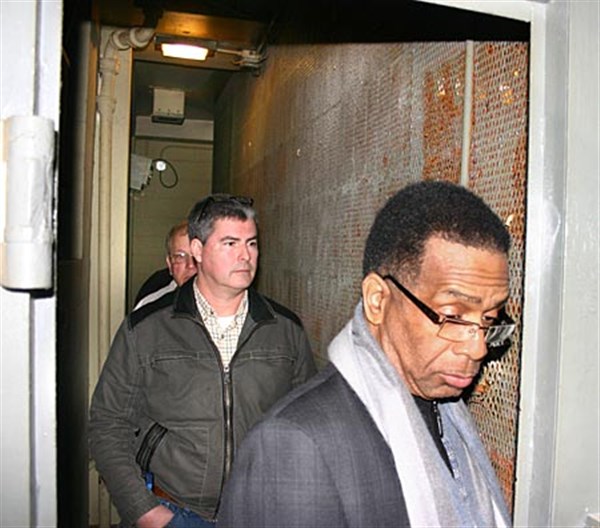 Yalobusha supervisors Amos Sims, Lee McMinn, Tommy Vaughn and George Suggs walk through the Yalobusha County Jail Monday morning. The inspection is required annually and must be recorded on the board minutes. Construction will start a new jail this spring, likely making this the last time supervisors will perform their annual inspection on the 1964 model jail. – Photo by David Howell 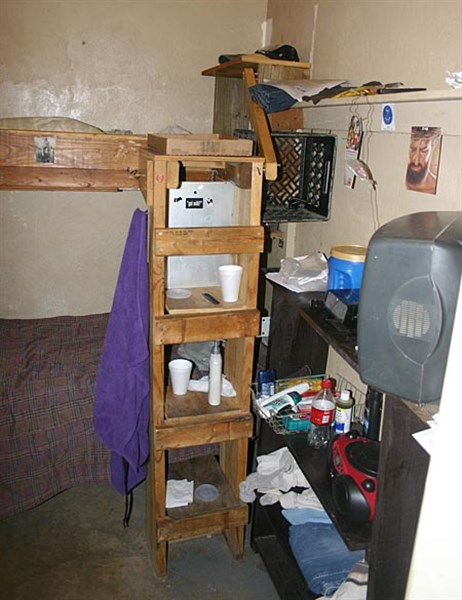 The county jail has housed prisoners for almost five decades and is scheduled to be replaced this year. – Photo by David Howell


WATER VALLEY–Yalobusha supervisors toured the derelict county jail after Monday’s meeting, an annual inspection required by state law. The jail inspection was included on the meeting agenda,  and the tour of the 50 year-old facility sparked comments that this should be the last year the facility is in use.
Construction is expected to get underway on a new county jail located on Hwy. 32 East this spring after supervisors locked in financing last October for up to $2.6 million to fund the facility in a lease-purchase agreement.  That amount was calculated after determining the annual payment–$184,000–the county could afford without raising taxes to retire the debt. An additional upfront $430,000 is earmarked for construction from existing county funds for the new facility.
Supervisors contracted with Benchmark Construction to design and construct the jail last year and plans show the new facility will have space for 61 inmates–46 males, 12 females, one lunacy cell, one holding cell and a medical lockdown cell.
The jail will not house state inmates, but county officials have discussed building a separate, metal building that would house state inmates who are classified to work.  Last week Board President Tommy Vaughn and District 5 Supervisor Frank “Bubba” Tillman met with Benchmark Construction president David Marsh to discuss the project.
Routine Meeting
Prior to Monday’s jail inspection, supervisors held a brief meeting that included 30 minutes of discussion on 15 items on the February 3 agenda before voting to enter executive session for a 30-minute discussion on a garbage collection issue against a county customer that includes litigation.
Items discussed in Monday’s open portion of the meeting included:
• Reappointed committee members representing Yalobusha County on the North Central Planning and Development District. The appointments included supervisors George Suggs, Lee McMinn and Amos Sims;  Water Valley Mayor Larry Hart and Earline Townes;
• Appointed Ivory Tinnon as District 4 requisition clerk;
• Approved the minutes;
• Entered homestead corrections on the minutes;
• Approved applications from logging companies to exceed the posted weight limit while hauling timber on county roads. The applications included: Chad Clark Timber in Districts 1 and 2 on County Roads 220, 463 and 95; Fly Timber Company in District 2 on County Road 127; Fly Timber Company in District 5 on County Roads 144, 147, 221 and 186; C&S Timber Pr. Inc. in District 2 on County Road 230; R & J Logging in District 5 on County Roads 4 and 5; Johnson Timber Company, LLC in District 5 on County Roads 20 and 216; Fly Timber Company, Inc. in District 5 on County Road 82 and Johnson Timber Company LLC in District 4 on County Road 154.
• Paid claims on Windsor Foods Expansion #3 from the Rural Impact Grant; and
• Set bid openings on March 10 at 10 a.m. for an overlay project on the south section of County Road 215 and a box culvert replacement on County Road 27 in District 4.
Both projects are funded using state aid funding from the Department of Transportation.